One Sheet of Ice 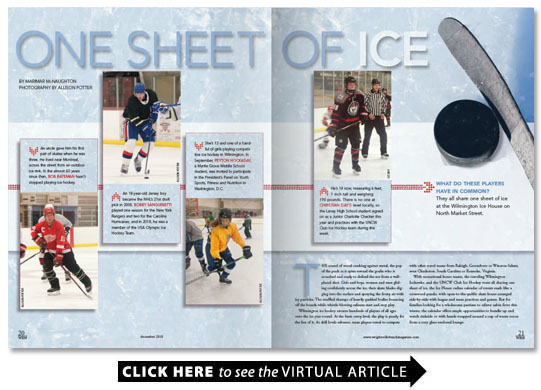 An uncle gave him his first pair of skates when he was three. He lived near Montreal across the street from an outdoor ice rink. In the almost 60 years since then Bob Bateman hasn’t stopped playing ice hockey.

An 18-year-old Jersey boy became the NHL’s 21st draft pick in 2008. Bobby Sanguinetti played one season for the New York Rangers and two for the Carolina Hurricanes and in 2018 he was a member of the USA Olympic Ice Hockey Team.

She’s 13 and one of a handful of girls playing competitive ice hockey in Wilmington. In September Peyton Hockaday a Myrtle Grove Middle School student was invited to participate in the President’s Panel on Youth Sports Fitness and Nutrition in Washington D.C.

He’s 14 now measuring 6 feet 1 inch tall and weighing 190 pounds. There is no one at Christian Day’s level locally so the Laney High School student signed on as a Junior Charlotte Checker this year and practices with the UNCW Club Ice Hockey team during the week.

What do these players have in common? They all share one sheet of ice at the Wilmington Ice House on North Market Street.

The sound of wood cracking against metal the pop of the puck as it spins toward the goalie who is crouched and ready to defend the net from a well-placed shot. Girls and boys women and men gliding confidently across the ice their skate blades digging into the surface and spraying the frosty air with icy particles. The muffled thumps of heavily padded bodies bouncing off the boards while whistle-blowing referees start and stop play.

Wilmington ice hockey attracts hundreds of players of all ages onto the ice year-round. At the basic entry level the play is purely for the fun of it. As skill levels advance team players travel to compete with other travel teams from Raleigh Greensboro or Winston-Salem; even Charleston South Carolina or Roanoke Virginia.

With recreational house teams the traveling Wilmington Icehawks and the UNCW Club Ice Hockey team all sharing one sheet of ice the Ice House online calendar of events reads like a crossword puzzle with open-to-the-public skate hours arranged side-by-side with league and team practices and games. But for families looking for a wholesome pastime to relieve cabin fever this winter the calendar offers ample opportunities to bundle up and watch rinkside or with hands wrapped around a cup of warm cocoa from a cozy glass-enclosed lounge.

“The goal ” says coach Rich Brouwer — a 50-year veteran of the sport who has been coaching for the last 11 years — “is to get them to start at 5 years of age.”

For some kids like Paul Hockaday’s three children who attended a try-for-free event several years ago it was their first time on ice. Today Harrison age 11 and his eldest sister Peyton age 13 play competitively for the Wilmington Icehawks Harrison in the U12 division and Peyton in the U14 division.

Girls ice hockey is one of the five fastest-growing sports in the US and arguably the world. In early fall 2018 Peyton Hockaday was invited to participate on a student panel hosted by the President’s Council on Youth Sports Fitness and Nutrition in Washington D.C. Unfortunately the timing of the event fell just days after Hurricane Florence swept through the greater Wilmington area disrupting travel.

The invitation was cool Peyton says but the idea of participating in a live streaming national media event was nerve-racking.

She had already begun thinking about her answers to some of the questions planned for the panel discussion and shared her response to three main topics posed: What barriers has she encountered or obstacles overcome? What coaches have become mentors on and off the ice? What is the future for girls hockey in Wilmington?

“When I started hockey I played inline before I played ice. My coach back then Randy Shields made everything so much fun and that helped me come out of my shell. Hockey is a huge part of my life ” Peyton says. “I used to be super shy and now I’m not. It gave me confidence. It allows me to stay fit and have fun with my friends.”

“Hockey isn’t a big thing around here ? it’s mostly a ‘guys’ sport. It’s hard to be part of a team if you’re one of the only girls. It’s sort of scary because when you get older you start checking.”

The U.S. Hockey Association allows players to check one another or body slam each other against the boards at age 13. Because many smaller markets like Wilmington rely on coed players to fill their team roster and boys are more likely to bulk up and build muscle mass sooner than girls the same age teenage boys frequently overpower teenage girls.

But there is some good news for girls who want to try ice hockey. This year the Ice House will host Try Girls Hockey For Free Saturday February 23. And with some seed money granted by the Carolina Hurricanes Foundation the Coastal Carolina Hockey Association which is the 501(c)(3) nonprofit behind the Icehawks brand is encouraged to build a stronger girls program.

Coach Rich Brouwer and parent Paul Hockaday are quick to point out Wilmington is a small market for the rapidly growing sport. And it’s expensive to play. The ice alone runs $400 per hour.

“Hockey is no doubt the most expensive sport for kids to play ” Brouwer says.

For families with kids who get hooked on the sport the association offers financial aid.

No one knows how expensive the sport is more than Liz Day a Topsail Middle School science instructor. Day’s son Christian Day a 14-year-old sophomore at E.A. Laney High School not only grew out of his equipment at an early age; the 6-foot and 1-inch 190-pound athlete also progressed beyond the local level. There are not enough players at his age and skill level to comprise an elite team so Christian tried out for and was invited to play at the junior level for the Charlotte Checkers. On weekends his team competes against other elite-level Junior teams in neighboring states from Georgia to Virginia.

One weekend in November Liz and Christian traveled to Chicago to participate in the CCM Youth Elite Hockey World Invite — the largest youth hockey tournament in the world. One of 10 000 players on 526 teams Christian says it was the biggest and toughest tournament he’s ever played. The competition was that much more intense and some of the players were just crazy fast skaters he says.

The cost of Christian’s hockey gear quickly adds up to thousands of dollars: $250 for a helmet; $500 for skates on clearance though they run as little as $150-$200; $150 per stick and players need two at all times in case one breaks. Add to that the mouth guard the shin and knee guards the elbow guards the padded pants and gloves plus the gear bag itself and the total is well over $1 000 — not to mention that during the month of October alone Liz and Christian spent 6 000 miles on the road. Add to that the cost of meals and hotels. But she does not begrudge the investment.

“All of that time was with my son ” she says. Some hours of that invaluable one-on-one time is spent talking about the future — the possibility of Christian attending private school where he can play hockey every day; the choice between travel hockey and travel baseball his summer sport; and the chance to enter college on an athletic scholarship that would support his academic education.

“The only downside to it ” Liz says “is it becomes your life. Your vacations are where you’re going to play hockey. Your birthday presents are hockey equipment.”

Liz Day’s husband Chris has been a hockey player since he was 5 years old so she knew what she was in for when they married.

Chris Day still plays ice hockey several times a week in one of several adult leagues. So does Tony McCabe assistant coach of the UNCW Club Ice Hockey team. Because they know each other on and off the ice Day was able to arrange for Christian to practice at the collegiate level during the week.

Tony says Christian is allowed to practice with the club team because the full-time roster took a big hit during Hurricane Florence when the university was closed for weeks and on-campus activities including athletic club practices were prohibited. The number of full-time players shrank from 25 to 14. Skating speed puck-passing skills and physical conditioning to minimize injuries are college level qualities. Christian’s size qualifies him to practice with the college team; but he admits “They are a lot smarter than others I play with.”

For younger players like Harrison Hockaday Christian recommends they learn to skate as fast as they can. Off the ice he conditions himself with speed drills and running as well as weight lifting squats lunges and ab exercises at the gym.

Harrison Hockaday says playing ice hockey has taught him to learn from mistakes to value teamwork and to respect leadership.

“When I was a second-year squirt I had the honor of being the team captain ” Harrison says. “This position taught me how to be a leader and helped me learn to listen to others.”

Christian stays in contact with his former U14 Icehawks teammates and agrees that girls need their own league because “boys get stronger faster.” Peyton sees herself earning “scholarships for the sport that I love. It would also be cool to start coaching a girls team when I’m older. I help coach the beginners team now and I love it.”

Bobby Sanguinetti former NHL and USA Olympic team player says he sees a bit of himself in Christian and believes it all comes down to parenting style and matching the child with the right coach.

“If I could preach to parents to allow kids to do what they want to do with sports — if they’re enjoying it there’s a passion there to get better develop the skills. ? I did the same thing traveling an hour and a half and I’m very thankful that my parents allowed me to do that.”

He has traveled the world playing hockey and expects to join a European team soon. Meanwhile every Tuesday night Sanguinetti who now lives with in Landfall with his wife and child plays with the Ice House 45s also known as the Beer League. Bob Bateman a Canadian native who moved to Wilmington in 2005 says “Bobby’s been playing for a couple of months. He’s head and tails above the rest of us. We love playing with him. He’s a smooth passer smooth skater a very smart player. He knows the game very well. He knows when to shoot and can find people who are open to pass to.” Bob adds one of the best things about playing with Bobby: “He includes everyone; he’s very unselfish.”