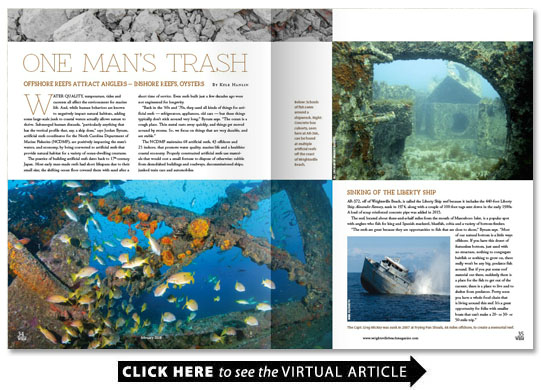 Water quality temperature tides and currents all affect the environment for marine life. And while human behaviors are known to negatively impact natural habitats adding some large-scale junk to coastal waters actually allows nature to thrive. Submerged human discards “particularly anything that has the vertical profile that say a ship does ” says Jordan Byrum artificial reefs coordinator for the North Carolina Department of Marine Fisheries (NCDMF) are positively impacting the state’s waters and economy by being converted to artificial reefs that provide natural habitat for a variety of ocean-dwelling creatures.

The practice of building artificial reefs dates back to 17th-century Japan. Most early man-made reefs had short lifespans due to their small size; the shifting ocean floor covered them with sand after a short time of service. Even reefs built just a few decades ago were not engineered for longevity.

“Back in the ’60s and ’70s they used all kinds of things for artificial reefs — refrigerators appliances old cars — but these things typically don’t stick around very long ” Byrum says. “The ocean is a rough place. Thin metal rusts away quickly and things get moved around by storms. So we focus on things that are very durable and are stable.”

Sinking of the Liberty Ship

AR-372 off of Wrightsville Beach is called the Liberty Ship reef because it includes the 440-foot Liberty Ship Alexander Ramsey sunk in 1974 along with a couple of 100-foot tugs sent down in the early 1980s. A load of scrap reinforced concrete pipe was added in 2015.

The reef located about three-and-a-half miles from the mouth of Masonboro Inlet is a popular spot with anglers who fish for king and Spanish mackerel bluefish cobia and a variety of bottom-feeders.

“The reefs are great because they are opportunities to fish that are close to shore ” Byrum says. “Most of our natural bottom is a little ways offshore. If you have this desert of featureless bottom just sand with no structure nothing to congregate baitfish or nothing to grow on there really won’t be any big predator fish around. But if you put some reef material out there suddenly there is a place for the fish to get out of the current there is a place to live and to shelter from predators. Pretty soon you have a whole food chain that is living around this reef. It’s a great opportunity for folks with smaller boats that can’t make a 20- or 30- or 50-mile trip.”

Artificial reefs in the Cape Fear region are predominantly offshore to encourage ocean-dwelling life closer to land. But the river has itself become home to an artificial reef constructed as an oyster sanctuary. It was the first stage of a long-term effort to restore the river’s oyster population minimized over time.

“Recently there’s been a big focus on artificial reefs’ economic benefits ” says Ted Wilgis coastal education coordinator with the North Carolina Coastal Federation. “Oyster farming has really taken off in the state. There is a lot of potential for it to be a very big industry and to take some of the pressure off of the wild stock. The Cape Fear River used to have a lot of oysters in it but the river has been so altered through dredging for the port that a lot of those reefs have been lost. But each year there’s this huge reproduction of oysters. You see all of these baby oysters everywhere so we know there are enough oysters in there to repopulate reefs. We just need to build the reefs.”

The NCDMF which falls under the purview of the North Carolina Department of Environmental Quality partnered with the Coastal Federation to build AR-491 in the Cape Fear River at Carolina Beach State Park just south of Snow’s Cut. The work performed in November 2017 created about one-fifth of the planned five-acre reef which is in a part of the river closed to shellfishing.

“That reef is unique as it is the only reef in North Carolina that is accessible from shore ” Byrum says. “At low tide you can walk right out there. We built it using about 7 000 tons of small crushed concrete think golf ball- to baseball-sized pieces. It will grow some oysters and be a great place to fish.”

The partnership between the Coastal Federation and the NCDMF serves each organization’s purpose. The federation is a nonprofit that focuses on advocacy education habitat restoration water quality and outreach to protect the coast while the DMF focuses on increasing and supporting commercial and recreational fishing opportunities throughout the state. Artificial reefs are essential for both groups.

For the federation the more areas where oysters can thrive the more benefits to the state’s coastal water quality and economy. Oysters and oyster reefs act as natural water filters and also protect the shorelines from erosion.

“You have this wonderful species and habitat oysters and oyster reefs that do a lot of things for free but have been decimated ” Wilgis says. “For every dollar you put in for oyster restoration about four dollars comes back in return.”

Federally collected taxes on equipment for fishing and boating help to fund things like the construction of artificial reefs and other efforts of the NCDMF. The division also receives state money primarily from the purchase of coastal recreational fishing licenses with those funds strictly earmarked for reef enhancement.

“When you think about it the people that are buying fishing licenses it makes sense to build places for them to fish ” Byrum says.