On the Banks of Hewlett’s Creek 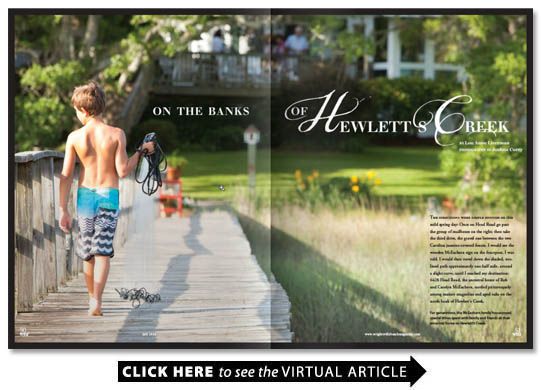 The directions were simple enough on this mild spring day: Once on Head Road go past the group of mailboxes on the right; then take the third drive the gravel one between the two Carolina jasmine-covered fences. I would see the wooden McEachern sign on the fencepost I was told. I would then travel down the shaded tree-lined path approximately one-half mile around a slight curve until I reached my destination: 6428 Head Road the ancestral home of Rob and Carolyn McEachern nestled picturesquely among mature magnolias and aged oaks on the north bank of Hewlett s Creek.

Steeped in rich tradition for nearly a century the two-story white clapboard house and its surrounding coastal property have been the bedrock of the McEachern family for generations. Family archives reveal the property on which the house was built was part of 13 acres purchased in the 1880s by Rob McEachern s great-grandfather Stephen Jewett.

Before his death the great-grandfather divided the property equally between his two sons. One was Rob s grandfather and namesake Dr. Robert Jewett. Originally a physician whose permanent residence was Winston-Salem Jewett eventually moved full time to his summer house on Hewlett s Creek.

This once-summer home was the house where Rob s mother Margaret grew up; and subsequently lived until marrying Hugh McEachern in 1929 when the young couple was deeded adjacent property by Margaret s father to build the 2 000-square-foot three-bedroom home where Rob and his older brother Sandy were children.

Aside from necessary updates and minor improvements to the house in the 18 years that they have lived here Rob and Carolyn have purposefully maintained the home s original footprint and architectural integrity.

When I was a child growing up here [in the 1940-50s] there were four houses on this northern side of the creek between here and the waterway and none on the other side. You couldn t live on the southern side of the creek without air conditioning. There was no breeze like we are feeling now. And the bugs would have carried you away   says Rob who remembers a boyhood rich in outdoor sporting shrimping crabbing and clamming on Hewlett s Creek.

Low tide is still my favorite   he admits giving a nod to the creek s ebbing afternoon tide as we walk around the yard s edge.

And I prefer high tide   laughs Carolyn.  It s much prettier to me.

An avid sailor with many trophies Rob also recalls the sailing days of his youth as well as hunting for ducks and marsh hens in the creek with his brother. And fishing remains a passion. He owns close to 50 fishing rods.

It was definitely a special place to grow up   he says.

Not much has changed as time has passed. Dubbed  Clamelot   the home continues to be a special place for the extended McEacheran family a gathering site for milestones and celebrations.

With four adult children between them and eight grandchildren ages 5 to 17   someone is always coming or going from here all the time   Carolyn says.  This is definitely a grandchild-friendly place. When the grandchildren are here they re either playing in the forts in the woods climbing trees fishing off the pier boating or paddling to  their island     Eckel Island   offers Rob gesturing to a small island just beyond the pier s end.

Rob and Carolyn play Camp Pappy and Camp Andmama each summer for their grandchildren who share long days of ocean fishing with their grandfather or playing in the creek and making crafts on the back porch with their grandmother.

Carolyn says they love to entertain and to share intimate get-togethers — most often outside on the lawn and back deck — with family and close friends. Wedding parties birthdays morning brunches holidays are all cause for celebration.

When my mother lived here the front yard [facing the creek] was all trees   Rob says.  We eventually cut down the trees for a full view of the water and for a bigger yard.

From fragrant Carolina jasmine and sweet honeysuckle bushes white dusty miller and boxed red geraniums to asparagus ferns the grounds are an ideal backdrop for Carolyn s imaginative outdoor vignettes. Throughout the yard and along the grassy perimeter she artfully arranges decorative plates painted benches and keepsake pottery.

I love a little color and I like to recycle things. Every year I try to do something different have some quirky stuff rearrange   she says.

It works. Perfectly I thought as I reversed my car to head back down the gravel road. In all its subtle glory this ancestral home on the banks of Hewlett s Creek has eloquently worked for generations to house years of old stories fond memories and happy times for the family McEachern.