On a cold rainy morning in November about an hour and a half before any scheduled classes some 20 high school students from John T. Hoggard High School wend their way through an overgrown field of grass off Shipyard Boulevard past the metal shell of a former greenhouse and on into a white concrete building known as the Blair Range nestled behind the tennis courts on the schools grounds. 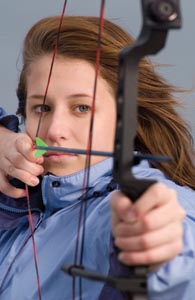 Scattered conversation ceases upon the arrival of Capt. James Prince retired U.S. Navy instructor. He delegates authority over this group to ROTC cadet Aubrey Grimsley who proceeds to direct the activities. In groups of five the students are called out to stand in a line that stretches away from the entrance door. Ten meters beyond a patch of sand are placed five traditional archery targets: yellow bulls-eyes and concentric circles of red blue black and white. On command from Grimsley the students step into place and retrieve an available set of what are known as “compound bows” and come to attention next to a standing quiver of about a dozen arrows. When Grimsley has determined that all is in readiness she gives the command to shoot and the arrows start to fly.

Safety issues inherent to the discharging of any weapon whether loaded with arrows or bullets lend an air of gravity to the proceedings. Conversation is limited. If it develops beyond a certain point Cadet Grimsley Team Commander of this 2010 John T. Hoggard High School Archery Team under the auspices of the schools ROTC program silences it with a word.

There is discipline in this group as they prepare to defend the schools title as State Archery Champions for the third year in a row. While the program has been in existence for less than a decade the training exercises and the state competition that will follow in February are reflections of an ancient history winding back centuries to the dawn of man and his early struggles for survival. 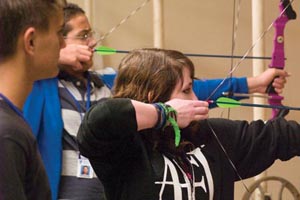 Consider the layered complexity of a simple bow and arrow system. Not only did its inventor from the early Mesolithic to late Paleolithic age about 50 000 years ago have to recognize the potential in a curved piece of wood he had to take that recognition a step or two further. He had to figure out that if he attached dried animal sinew to each end of this curved piece of wood and pulled on that string after inserting a notched straight wooden projectile with a sharpened rock at the end of it he could propel that piece of wood over space to kill an animal that was coming at him with dinner on its mind. Not only did it reverse (forever) the relative position of the combatants in any “whats for dinner?” equation but it provided early people and their ancestors with a certain peace of mind allowing them to move on to things like writing the internal combustion engine and the computer to name just a few things that couldnt have happened otherwise.

Todays modern bows bear little resemblance to the wooden bows invented by these ancestors and popularized in the 20th century by depictions of Robin Hood and his band of Merry Men. The materials adjusting to a deeper awareness of the physics of energy and the aerodynamics of objects in flight have gone from wood to fiberglass. The bows themselves have gone from the simple curve of a piece of wood through the construction of the crossbow to the creation of the recurve bow (which uses a sort of double angle on the curvature of a piece of wood or designed piece of fiberglass to increase its energy potential) to the development of the compound bow used by J. Hoggard High Schools archery team and in most modern competitions.

The compound bow employs a system of wheels and pulleys that increases the amount of stored energy in the drawn bow while at the same time decreasing the amount of energy required to store it. Halfway through pulling the string back with the arrow in it on a compound bow you may be pulling the equivalent of 60 pounds but at full draw thanks to the wheels and pulleys you might be pulling only 24 pounds. 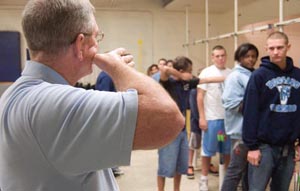 While archers a staple of warfare since the days of the Persians Assyrians and Parthians (in what is now modern-day Iran) were replaced by riflemen hunting and accuracy competition are as keen today as they were in the days when Robin of Locksley was busy irritating the Sheriff of Nottingham.

J. Hoggard High Schools ROTC archery program and its state championship team are a case in point. The tournaments in which they participate are “virtual.” The competitors do not travel to a single location but compete all across the state and with organizational oversight compare scores to determine winners. Seven of last years top ten winners in North Carolinas competition were on the Hoggard team.

“Weve been state champions for the last two years ” says Capt. Prince. “We went to the national tournament in Louisville last year where our team finished among the top 20 percent of teams in the nation (representing) more than 4 000 archers.” 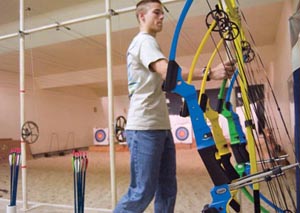 Archery training these days is geared toward two distinct and separate enterprises. Hunting is one of them and is important not only to hunters themselves but to the local and national organizations that manage wildlife including North Carolinas own Wildlife Resources Commission which oversees a statewide Hunter Education program. In addition to training that focuses on small bore rifles and shotguns the program conducts archery training under the auspices of a National Archery in Schools Program.

“Its about maintaining interest in the shooting sports ” says Travis Casper an assistant with the Hunter Education Program based in Raleigh. “Wildlife management is funded through taxes on weapons and ammunition. We have to maintain that interest so that the state of North Carolina gets its share of the federal funds allocated for wildlife management.”

This plays out at local sporting outlets like Canadys on Wrightsville Avenue and Dicks Sporting Goods on South College Road where consumer interest lies on the hunting side of things.

“The number of archers who shoot goes up by 10 or 15 percent every year ” says David Miller resident archery expert at Dicks (and the original coach of J. Hoggard High Schools archery program). “More and more people these days are looking for an ethical way of becoming involved in the hunting process.”

According to Andrew Yates manager of Canadys which has been in business for nearly 70 years here in the Wilmington area hunters make up a majority of the customers interested in archery.

“We do a big archery business ” says Yates “and it grows every year.”

Modern equipment can vary widely in price. A simple bow and arrow set can be purchased for as little as $20 while professional systems designed for hunters or serious target shooting competitors can cost nearly $1 000 with a variety of mid-range systems available.

Development of Olympic athletes is another aspect of local and state archery training with programs acting as a feeder mechanism out of which could emerge our next Olympic champion.

Doug Engh executive director of the National Alliance for the Development of Archery (NADA based in Florida) says archery is re-emerging as a vibrant sport in the 21st century with approximately nine million people a year who shoot recreationally.

“Its one of the top activities at summer camps and recreation departments throughout the country ” says Engh. “We train new instructors for these programs every year and were expecting to top out at around 7 000 of them this year.”

Two of the thousands of instructors that have gone on from NADA instruction certification to provide training and guidance to a generation of new archers are right here in Wilmington: Patricia Roderick (affectionately known as Mama Pack) and John Pfeiffer whose granddaughter Jessica was the top female finisher in last years statewide archery tournament.

Archery took something of a back seat in Pfeiffers life until he and his wife became involved with the local Girl Scout program. Pfeiffer and Pack (recently retired from New Hanover County Schools) both attended certification training that led to an on-going archery program at Camp Pretty Pond in Winnabow near Southport and another launched by a local church. They are presently working on the development of an after-school program which has thus far been hampered by a sagging economy.

“(Archery) is about the challenge and its also about self-esteem being able to say I can do it ” Pack says. “A lot of girls (approach sports) with the idea of I cant do it but when they hit that target for the first time they have a smile that just wont quit and that smile makes my heart feel good.”

On that rainy November morning as members of the 2010 J. Hoggard High School archery team set aside their bows and walked out onto the Blair Range sand to retrieve their arrows from the targets those smiles were everywhere. As they determined just how close to perfection they had come (perfect being 50 points; five arrows in the 10-point bullseye) they poked light-hearted fun at the less-than-stellar performances of teammates.

Unlike their ancestors whose accuracy was often a deadly serious matter of survival these teenaged archers dont have a lot to worry about other than time leisure and an earnest desire to improve.

“I hadnt shot a bow and arrow since I was about seven years old ” says senior team commander Grimsley who became part of the archery team after shed signed on to an early-entry ROTC program that will see her enter the US Marine Corps upon graduation. “Its competitive and fun being on this team.”