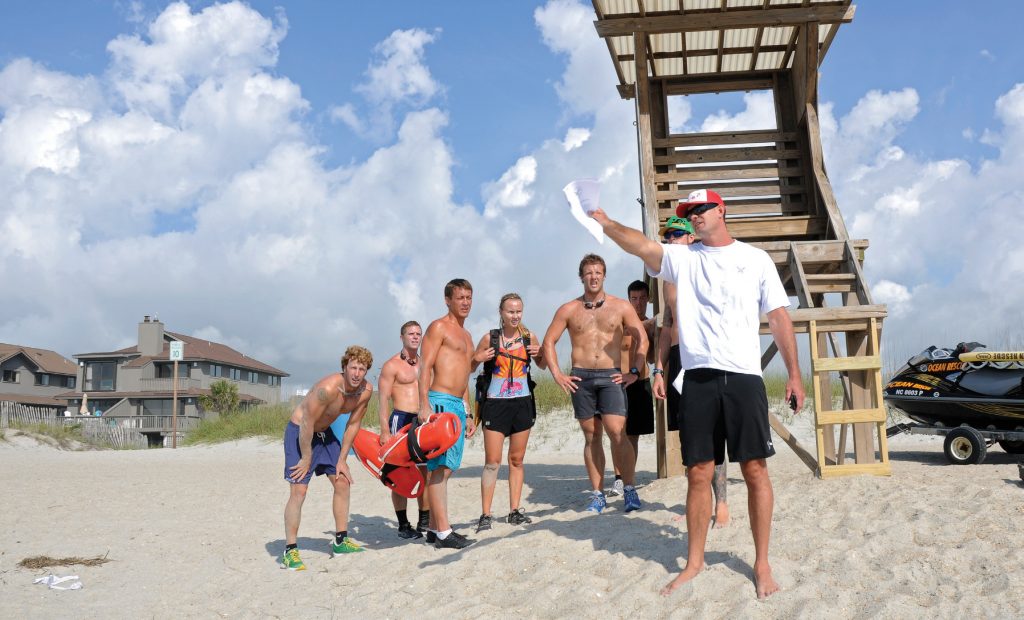 Wrightsville Beach Ocean Rescue captain Jeremy Owens directs a team on its next task during the grueling Lifeguard Challenge in May 2012. WBM file photo.

At the stroke of midnight each New Year’s Eve, lights flash, a shiny ball drops and horns blare, signifying a change — but nothing is really different except the time. For the world to change, it takes more than turning a calendar page. It requires a person.

That’s what Jeremy Owens, Wrightsville Beach Fire Department and Ocean Rescue captain, dedicated his life to every day. He was a keeper of the sea.

Like any true humanitarian and like the Headless Horseman he played in the TV production of Sleepy Hollow, he never showed his face to claim the glory. Giving people more time — whether saving them from a rip current or house fire — was his call of duty, not seeking the limelight.

“His demeanor is the true, quiet confidence,” Dave Baker, Ocean Rescue director, says. “He has nothing to prove.”

It was a beautiful weekend in 2010. The sky was blue, the sun was shining. But there was a hurricane offshore. It wasn’t visible to the eye but underneath the surface a trough was forming like two rivers coming together. The treacherous rip current pulled 21 swimmers out to sea.

“It looked like a hornet’s nest of bodies and people screaming,” Baker says.

Jeremy was on the jet ski. Ocean Rescue lieutenant, paramedic and firefighter Sam Proffitt (also Jeremy’s best friend) was on the radio and Baker was in the truck pulling lifeguards from stands. The guards swam to the outskirts of the rip and Jeremy, using sheer muscle and determination, grabbed those 21 swimmers one by one, spinning them off to the nearest guard who brought them back to shore.

“Two hundred and twelve people [rescued]. One day, with one rip pulling 21. No loss of life,” says Baker.

Superhero is a word commonly used to describe Jeremy, and while he wasn’t one to boast he did let it be known by the age of 4, when he was all decked out in a Superman costume roaming the aisles of the local grocery store with his mom, Debbie Owens, that he was born to save lives.

She remembers a school race when he was in third grade. A classmate fell. Jeremy no longer cared about competing. He ran back, helped the boy up, and they finished in last place together. Even as a child he was conscientious and kind. As a newborn his big, brown eyes followed every movement in the room.

“He was paying attention like an old soul from the time he came in,” Debbie says.

Jeremy was a true waterman — a sailor, a surfer, a swimmer, a diver, a lifeguard. Born to parents who met on Wrightsville Beach and also both worked as lifeguards, he was a big brother not only to his two siblings but to the entire town.

He started the Junior Lifeguard program, developed techniques and protocols that saved lives, broke the Fireman’s Challenge record he still holds, was instrumental in receiving the U.S. Lifeguard Association’s national award for commitment and dedication to public safety and education, and founded Evolution Mixed Martial Arts, where he trained UFC fighter Derek Brunson.

He also was a stuntman who Proffitt says was offered roles that could have made him hundreds of thousands of dollars. But Jeremy chose to use his brain and brawn for the real deal rather than the screen, unless the acting didn’t interfere with his work schedule.

Not that he had a schedule he followed. With hot coffee and extra cream in hand, Proffitt remembers many shift changes in the F-250 Super Duty rescue truck trying to get Jeremy to go home and rest. But a true superhero doesn’t operate by a time clock.

Looking back, we imagine what life would look like without 5,000 of us here. That’s how many lives Jeremy or someone he trained saved over the 17 years he served.

“If Wrightsville Beach was a skyline of people, everybody would be single-family homes and then Jeremy would be the Empire State Building,” Baker says.

It seemed as though Jeremy’s 6-foot-4, 220-pound stature correlated with the size of his heart. This is anatomically incorrect, of course, but we do know his heart carried the capacity to love an entire town and all 14 million-plus beachgoers he watched over since the day he took the stand.

If Ocean Rescue were just a job, maybe the load would have been lighter. But as Proffitt says, saving lives was his life.

“Most of us, we see things along the side of the road, but we don’t have to be there holding that person as they die,” Debbie says. “There are many factors that can affect our thinking, from a healthy gut to our brain chemistry. We have really got to pay attention to our brain health. He struggled for a variety of reasons. Jeremy battled cumulative stress from his occupation similar to PTSD. Depending on what doctor you see, some will say it is depression, some will say it’s anxiety.”

“The things we hear when we’re working on people — screaming and yelling and crying — those things carry with you,” he says. “Jeremy and I made some really gnarly recoveries over the years I would never want anyone else to experience. Those things compile. Some take forever to get over.”

There needs to be more awareness of mental health, his mother says.

“Healthy brains have to be our focus. We need a balance, a healthy balance. The main thing: we need research, more data on this type of medical condition. It’s more about healthy brains and healthy brain chemistry.”

In the end, the sea will continue to ebb and flow. Even the beach — our little paradise — has its ups and downs. But we have lost our Captain.

Jeremy’s mother has a song — “The Angel in the Ocean” — brewing in the back of her mind.

“I do believe Jeremy’s going to continue to watch over all that happens here and speak to people in different ways,” she says. “One of the messages he wants is the importance of taking care of those struggling, making sure they’re heard and have a venue to get the help they need.”

To Write Love on Her Arms
www.twloha.com

Touched by Suicide (locals meeting by Zoom once a month)
www.touchedbysuicidenc.weebly.com

See the January 2018 issue of Wrightsville Beach Magazine for an in-depth roundtable discussion of how suicide has touched our community.