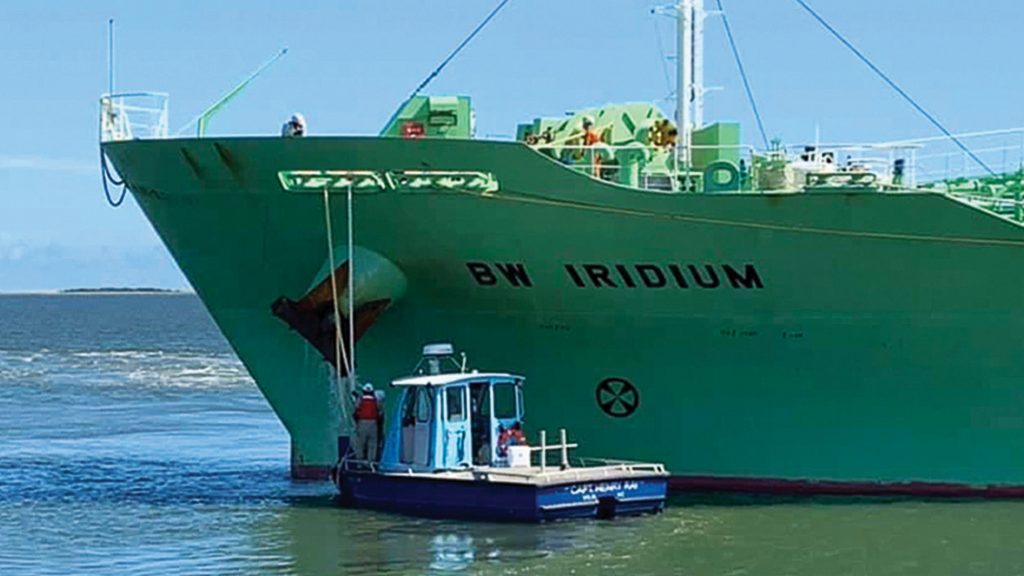 Bound for the Port of Wilmington, her foremast rigged tightly against a raging sea, the heavily laden four-masted schooner Sallie Marvil broached hard to starboard. In a vicious current, she slipped perilously close to the seething Frying Pan Shoals. Thrown off course by the storm, the ship was out of supplies and in dire need of repairs. At the helm the captain, an old master of many oceans, cringed as a rogue wave suddenly lifted the bowsprit 20 feet above an iron gray sea, releasing it with a smashing blow to the yawning trough below. On the distant horizon, framed against a dark and looming November gale, the massive dunes of Bald Head Island rose above a violent, smoking surf.

It was the winter of 1900. The Port of Wilmington was a thriving maritime commerce center, trading a diverse array of products from naval stores, cotton and tobacco to timber, fertilizer and petroleum.

Despite the close call with the Graveyard of the Atlantic, the captain’s skill brought the Sallie Marvil safely into the Cape Fear River. She limped into Wilmington, her holds filled with hogsheads (barrels) of molasses from the Caribbean. After discharging her cargo, she would load naval stores (tar, pitch and turpentine derived from nearby longleaf pine forests) for export to the shipbuilding trade in London — a 30-day voyage across the Atlantic.

When a ship is in port, supplies are readily available and provisions are plentiful for an upcoming voyage. Spending long periods of time at sea, however, can deplete those supplies quickly. By the time the Sallie Marvil arrived in Wilmington, her food, fresh water, and other critical items for her crew of five officers and 20 sailors weren’t just low, they were gone.

Once she was safely in port, and the necessary discharging and loading operations were underway, the captain could begin replenishing his vessel — an exercise that has been done for centuries by a ship chandler.

A ship chandler specializes in supplying the required commodities for a shipping vessel and its crew. That list might include groceries, potable water, fuel, charts, navigation supplies, rope, canvas, tools, and spare mechanical parts.

In 1900, the ship chandler who would have supplied the Sallie Marvil was Oscar Andrew Durant, founder of the original firm that under his son, Oscar Earl Durant, would later become the O.E. Durant Company. It is still in operation, 120 years later.

Oscar Andrew Durant operated both a chandlery to his dock at 2 S. Water Street. and a ferry across the Cape Fear River about where the USS North Carolina is berthed today. Farmers from Brunswick County used Durant’s ferry to bring grains, eggs, fresh produce, and dairy products to Wilmington markets. Many of those products were purchased by Durant and resold to vessels in port.

The Water Street building, which housed the Durant business through the 1970s, still stands and is known as the Brooks Building on the Wilmington Riverwalk.

From its headquarters building over the next century, the company would supply vessels from sailing ships to steam-powered Liberty ships to modern diesel cargo ships.

The Ports of Wilmington, Morehead City and Sunny Point were all strategic loading and sailing points during World War II, the Korea and Vietnam conflicts, and the current Gulf hostilities. O.E. Durant supplied provisions to ships in each war period.

Although no longer owned by the Durant family, the business still bears the original name. Newer technologies and capabilities have allowed the company to expand beyond essential commodities to specialized services like repair and maintenance, fueling, tug, barge, and line boat services.

“When a ship arrives at the Port of Wilmington, it must be secured to a permanent structure such as a wharf or pier to hold it in place for loading or discharge and to keep it from slipping away back into the channel,” he says. “The ship is secured by heavy lines called hawsers, which are attached onboard the ship near the bow and stern on what is called a bit, and on the wharf by what is called a bollard. You might think of these as giant metal mushrooms. It works like this: the hawser, which has an eye on the shore end, is passed down from the ship to the dock and the ‘eye’ of the hawser is placed by a line handler over the bollard. Slack is taken up on the ship with a winch and the line is made tight thereby securing the ship.”

But often the wharf is too far from the ship, especially at tanker terminals. That is where the line boats come in.

“The ship lowers the hawser to the deck of the line boat, which is waiting in the river below, and the line boat then runs the hawser over to the wharf where it is secured to the shore side bollard,” Ferrer says. “Depending on the number of hawsers used, the scene is repeated at different locations until the captain is satisfied that the ship is secure. It may sound simple, but with wind and current and a moving ship, it is a highly technical and dangerous job. Our two line boats, the Wildu II and the Captain Henry Ray, are on call 24 hours a day, and our line boat captains are U.S. Coast Guard licensed.”

Unlike the company’s early days when large quantities of goods were kept in stock, current inventories only cover the most critical, hard-to-find items. Most orders are quickly obtained through just-in-time supply chains, with deliveries made while the vessel is in port.

“Most East Coast ship chandlers were established businesses that were started and operated by maritime families,” says Debi Prince, who recently retired from her longtime position as vice president and general manager at O.E. Durant. “Current technology and international trade have radically redefined ocean freight transport. Ships are faster, have become highly automated, and require smaller crews. As a result, the chandlery business has become more diversified and specialized.”

Some of those diversifications serve as new profit lines. For instance, Durant offers marine transportation and management services such as tugboat leasing and inland barge towing to marine interests along the river.

While ships usually order general marine supplies, chandlers get some strange requests, like arranging for a deceased captain’s ashes to be broadcast at sea.

A chandler’s life is rarely dull. For example, at a Wilmington tanker terminal a foreign stowaway trying to enter the U.S. illegally had hidden away in a ship’s chain locker, where he was brought food and water during the voyage by a sympathetic crew member. At arrival, the chandler and chief mate went to inspect the anchor chain in the locker. When they opened the door, the stowaway leaped out with a drawn dagger, took a swipe at the mate, and made for the gangway. The crew tackled him before he could make his escape, authorities were called, and the indigent stowaway was eventually deported.

In another case at a Wilmington cement dock, the chandler was asked to take boxes off an arriving ship for temporary storage in his warehouse. As he was off-loading the boxes. U.S. Customs agents with dogs arrived for a random inspection and found illicit drugs in the boxes. The chandler was exonerated but had some serious explaining to do.

When a ship arrives from a foreign port it must be inspected and cleared by federal agents before anyone can go onboard. Those who have business with the ship must wait at the gangway.

At a bulk salt terminal in Wilmington, the chandler noticed a chilling sight as he waited for a ship to clear — a hearse was parked on the dock. Soon, crew members carried a large, strange bag down the gangway to the waiting hearse. The bag contained the remains of the second mate, who had perished during a long sea voyage.

The old cargo ship had no morgue, and much to the dismay of the chandler who had a delivery of fresh vegetables, the unfortunate gentleman had been stored in the galley’s walk-in refrigerator.

It may sound strange in our modern age of air travel, but most cargo around the world is still transported by sea. With the increasing demands of efficiency, modern container ships have morphed into behemoths of the sea.

In 1900, a typical schooner like the Sallie Marvil was 130 feet in length and could haul some 200 tons of cargo under her crew of five officers and 20 seamen. The largest modern-day container ships, known as the ULCS (Ultra Large Container Ship) Class, are more like 1,200 feet in length and can carry some 20,000 20-foot containers with even less crew and arrive at their destination in a fraction of the time.

The Cape Fear River has been a vital factor in the development and economic growth of Wilmington. O.E. Durant is just one of the many interesting companies operating there.