Not So Shabby Oh So Chic 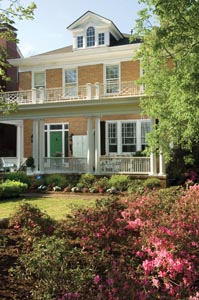 Rigid black fence posts can barely contain the riot of color that erupts each spring from Jackie Burchs garden. She calls it a tribute to azaleas perhaps because her homes original owner Houston Moore was the first chairman of the North Carolina Azalea Festival.

Nor can the house that Moore built a stately two-story 1921 Neoclassical Revival on the corner of tree-lined Market and 19th restrain the energetic Burch who picked up her L.A.-based film business and moved to Hollywood East.

This is the biggest house Ive ever lived in because you can get it here. In L.A. I came from a 1 350 [square-foot-house] ” Burch says.

Flirting with an eclectic collection of European and American treasures Burch playfully stages and then restages her furnishings and many decorative accessories into different takes on the same theme.

“Its filled with flea market finds. This is definitely shabby chic ” she says.

Once settled how did the native upstate New Yorker by way of Los Angeles acclimate to Wilmington? 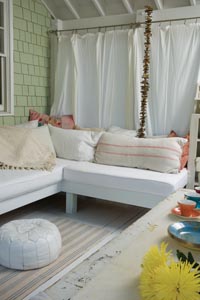 “Im a casting director ” Burch says. “I go to a lot of theatre and Im very impressed with Level 5 Linda Lavin and Thalian. I think the only downside to Wilmington is that we dont get enough independent movies. Were lacking in that Jewish delis and organic breakfast places. Other than that everything is great.”

“I think the biggest thing for me is that people wave to you when youre walking down the street. You would never get that in L.A. or New York. Its very charming.”

So is Burch and so is the home she renovated long distance with her contractor Luther Smeilus Carolina House Pro.

On any given day against this understated palette Burch moves objects around to create textural compositions inspired by what pleases her at the moment. Like the patina of soft green found in the crackled paint of an old door pulled from its hinges that leans against her wall like a color field. In another corner a cranberry red door. 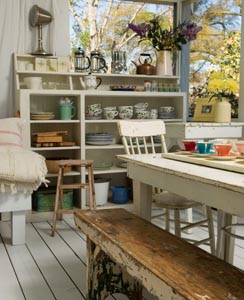 “Im known for red doors ” Burch says. “My last house was 1020 Ogden in West Hollywood. When I came here this brick did not go with red. I wanted a simple red door. Its a memory door its so that my kids have a little something from each house.”

Flashes of lobster barrels painted deep blue and bright orange are incongruous additions to the interior landscape placed around the periphery like little juxtapositions. On her turquoise-blue distressed-wood conversation table is a framed vintage black-and-white portrait of her parents. Her mothers knitting needles are bundled like a bunch of flowers in a vase while stacks of hardbound linen-covered books line the mantel a study in tumbled sea glass hues.

The openness of the parlor extends from the Market Street facade through the dining area into the sun room that overlooks her rear garden. From a downy dog bed covered in Shabby Chic fabric Fanny her Wheaton terrier steals the show. 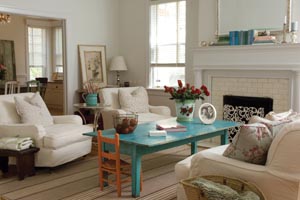 Most of Burchs furniture was plundered from Pasadenas Rose Bowl and Santa Monicas flea markets where she found her hand-painted farmhouse table and a credenza buffet that traveled from Budapest to Los Angeles to Wilmington. In an old armoire she hides her television.

“I tried to mix Wilmington with what I brought with me ” she says.

Inside the kitchen Burch says “This is where the renovation started. Everything in this kitchen was gutted.” 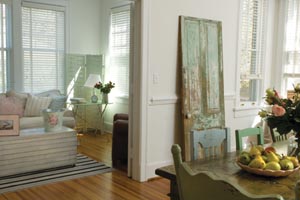 After tearing out an interior wall old cabinets and the counter Burch added open shelving for storing pottery bowls and tableware an alderwood work surface and a new floor that is a close match to the heart pine found throughout the house. With a new Wolf commercial-grade gas range in place of a wood stove and a Big Chill retro refrigerator Burch says “I tried to do it as if this was the kitchen you would have had in the olden days.”

Her peek-a-boo pantry covered by one of Susan Covingtons signature screened doors reveals a passion for color and a compulsion for clustering like things together with multiple boxes of white and red Special K racked above 28-ounce yellow and red cans of San Marzanos Cento Italian tomatoes. 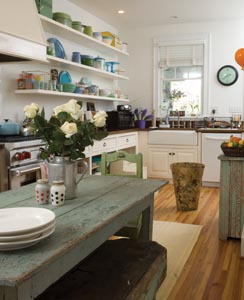 The back door of the kitchen now opens into a screened porch the only true addition Burch made to the house. From a hutch filled with china and glass she sets an exquisite table for family and friends for dining al fresco. In one corner Roy Feaster handyman extraordinaire created an inviting L-shaped seven-by-four-foot built-in chaise bolstered by five-inch slip-covered cushions and piles of pillows covered in muslin and ticking. Drawn drapes add another layer of enchantment that is completed by a landscape of vine-covered fences a running creek and a backyard filled with flowers and sunshine.

There are three chandeliers original to the house and two stairways that lead to the second floor one from the foyer and the other from the rear corridor that Burch believes might have been a maids staircase. Upstairs the sprawling floorplan supports three bedrooms two baths a den and a laundry. 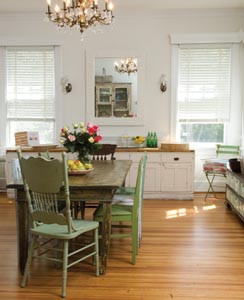 “I have two daughters and I said to them I want you to be comfortable. Im going to decorate the house but you pick the colors ” Burch says.

The dove-grey room trimmed with white featuring framed movie posters is reserved for her older daughter a New York-based writer. Her younger daughter a jazz singer chose hot pink for her room furnished with a $100 flea-market bed and retro lamps found locally. The bathroom they share with authentic wallpaper Burch says she did not touch.

“They came here the first time and were blown away ” she says. “They love Wilmington.”

Her master suite includes a headboard made from an old mantel a Covington trademark design. In her bathroom the honeycomb tile is authentic but the glass-enclosed rain shower is brand new paired with a chandelier a vintage soak tub and a retro physician-issue stainless-steel medicine cabinet. Burch bought all of the fixtures online. 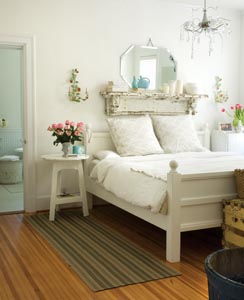 Her casting office is located several paces away in the detached garage. Feaster and Tom Covington helped with the desk an old door laid over end tables. In one corner she shoots screen tests.

“The actors sit here ” around an outdoor table “and on the screened-in porch when theyre reading.

“I just finished The Conspirator with Robert Redford. I did the local casting ” she says.

Though her job never brought her to Wilmington Burch says “I found out it had an ocean good real estate and the film business and heres what the greatest surprise is sophisticated restaurants and clothing stores. I lived in L.A. a long time and I did 16 movies there and I just didnt want to live in L.A. any longer and everyone kept saying Go to North Carolina its like Hollywood East.”

Like all good casting directors Burch loves talent and knows it when she sees it. She recruited her TV installer to paint canvases that she hangs around the house. 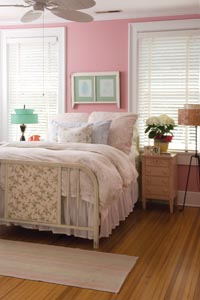 Her contractor Luther Smeilus was on the phone with her every day during the renovation. She says hes a genius and Feaster is her Jack-of-all-trades.

“He is amazing ” she says. “He and I design everything together. Roy I met because Labor Ready helped me unpack and his wife runs it. She said My husbands a handyman. I have never met a human being who is as ethical as Roy. I help feed the homeless with him.”

And by asking around about good restaurants Burch discovered Covington after a visit to Nofo where she found a bench she adored.

“I must have called Susan a hundred times ” Burch says “and finally she called me back and I said Susan Im an L.A. person and Im dying because there are no flea markets here. Then I went over and met her love at first sight love her and shes got the warehouse. At least I feel like I can shop there.” 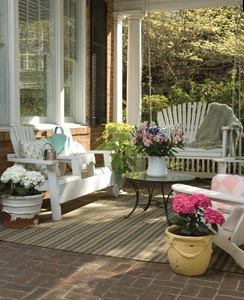 Burch raves over Caryn LaVeres Artichoke at Chandlers Wharf for its European-styled designer clothing and also for the Dash & Albert floor rugs found around her home and Chuck Bennetts Morpho Designs. Bennett carried her direction into the gardens.

“I do everything as green as I can ” Burch says. “Everything is natural.”

“One day Im outside and these two women pull up and they say Are you Jackie Burch? and I say Yes and they say We used to live here and I say Come on in Ill show you the house.”

Taking them all the way to the second floor Burch opened the door to the full third-floor attic showing them the handwritten diary on the wall of the stairs.

“Theyd forgotten they wrote this Bobby hayride and one said Oh look thats my boyfriend.”