No Bees, No Berries

Bees — and beekeepers — play an essential role in blueberry production. 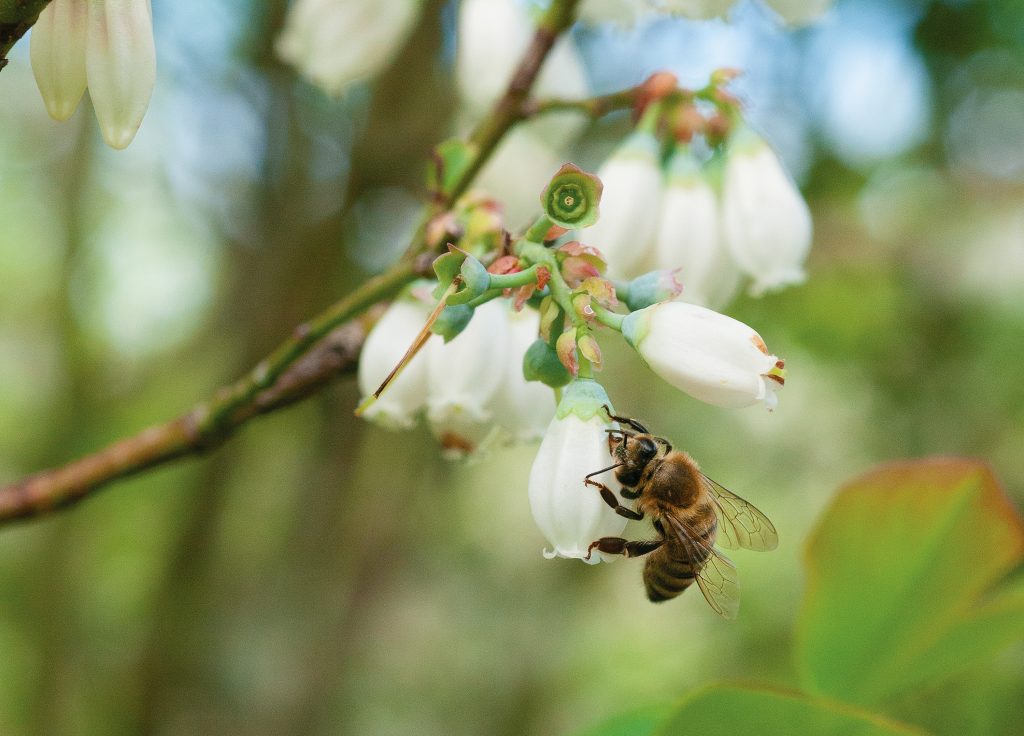 Blueberry enthusiasts might love to pick and admire the perfect berry before plopping it in their mouth. Visions of pies, smoothies, summertime and even festivals may fill their minds. But most likely, they don’t give a thought to the necessity of honeybees in the creation of one of their favorite fruits.

All types of bees play a crucial role in the world’s food production. They pollinate about 75 percent of the fruits, nuts and vegetables grown in the United States, reports the U.S. Department of Agriculture. Simply put, without bees there would be no blueberries.

The blueberry farm industry is growing rapidly in southeastern North Carolina, causing the demand for honeybees to keep pace. Commercial farmers rent beehives to help pollinate berries and other crops because there just are not enough wild bees to even begin to get the job done.

“In modern agriculture, a farmer may have 500 acres of one solid crop,” says Grant Stiles of Stiles Apiaries in New Jersey. “Native bees will only do some pollination along the edges of the farm; therefore, you need honeybee pollination.”

Stiles overwinters bees in Pender County, which he rents to local farmers.

Willie Moore grows blueberries in nearby Ivanhoe. He points out that the weather must cooperate along with the bees.

“Bees are vitally important, but the weather has got to be decent before the bees will actually fly,” he says. “When you have flowers hanging out in the field you’ve got about six or seven days to get that flower pollinated before it will abort. That’s why your bee population is your lifeblood. Without bees you don’t have fruit, or vegetables, or anything.”

Traditionally, a farmer would rent one hive per acre, but with a six-day pollination window for blueberry blooms, it sometimes works better to have more. Rental fees vary between $80 to $150 per hive for the bloom season. Circumstances can drive the price higher.

Beekeepers load their hives on flatbeds or in semis and deliver them to farms for use during bloom season. They handle the bees early in the morning before they are out flying.

European settlers are credited with bringing honeybees to North America in the 17th century. A lot has changed since then. Beekeepers are faced with new challenges each year.

“It is getting harder and harder to keep bees alive,” Cannady says. “There’s things we are dealing with: mites, viruses, beetles, disease, things that we didn’t use to have to worry so much about.”

He said the bee mortality rate is discouraging and nobody seems to know why honeybees are suffering.

“I don’t know if it has to do with pesticides, or something seeds are being treated with,” he says. “All around those bees are going to be corn fields, and soybean fields, cotton fields and sweet potato fields. And people are going to take care of their stuff and spraying or doing who knows what.”

It is possible that bumblebees will be part of the answer.

“It’s not uncommon for people to use both bumble and honeybees,” Cannady says. “The bumble is bigger and heavier; the thinking is it can fly and work when it is colder and more windy. We are starting to see people use bumblebees exclusively.”

The same bees that pollinate North Carolina blueberries in March might have been trucked to California to pollinate the almond groves in February. Cucumbers, watermelon, cantaloupe, and squash are also pollinated by rental bees in their flowering seasons.

“California requires 2.5 million colonies of bees for one pollination for a month of almonds,” Stiles says. “They bring bees in from all over the county to meet that demand. I would guess that North Carolina for blueberry production requires about 10,000 colonies.”