Night on the Farm 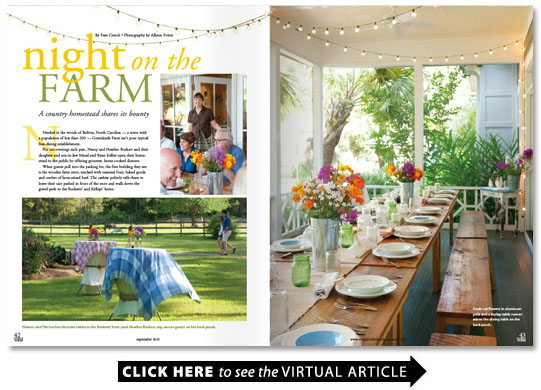 Nestled in the woods of Bolivia North Carolina — a town with a population of less than 200 — Greenlands Farm isn’t your typical fine-dining establishment.

For ten evenings each year Henry and Heather Burkert and their daughter and son-in-law Maud and Ryan Kelley open their homestead to the public by offering gourmet home-cooked dinners.

When guests pull into the parking lot the first building they see is the wooden farm store stocked with seasonal fruit baked goods and coolers of farm-raised beef. The cashier politely tells them to leave their cars parked in front of the store and walk down the gravel path to the Burkerts’ and Kelleys’ home.

Heather Burkert opens the farmhouse door and welcomes visitors with a warm smile. The Rolling Stones music playing inside might not be what one would expect to hear in a rural North Carolina farmhouse. The view of a small lake from the living room window and the colorful cut flowers in an aluminum pail on a table are among the house’s homey touches.

Guests are served hors d’oeuvres on silver platters at 5:15 p.m. Organically grown okra lightly grilled in sea salt and olive oil dipped in a creamy citrus basil sauce are ideal appetizers for a warm evening. The hosts also cater to those with vegetarian and dairy-free diets.

“The dairy-free sauce has mayonnaise made with eggs from our farm ” Maud Kelley says.

“We grow an okra that was given to us from one of the Holden family. They collected it in 1994 ” he says.

Part of the family’s okra production this year is from that original plant he says adding the seeds just sat in a can on a shelf all those years.

“Oh I love fried okra ” he continues. “You can eat it right off the vine too — just pick the pod off the plant. You can take a pod and cut it open and let it sit there for 15 minutes and it’ll probably have 30 flies on it because of the sugars.”

“Lots of interesting plants have been passed down through the years. Crookneck squash is a beauty and that goes back to the 1700s. There’s nothing fancy about it ” Henry says. “Typically everything we do is either heirloomed or hybrid. Hybrid is not a bad word as long as it’s not hybridized in a laboratory. Heirloom is typically a plant that’s been around for 50 years or more. Somebody found value in what that plant was doing and how it was performing and then they just saved seeds from that and they get passed from generation to generation.”

After hors d’oeuvres and iced tea guests are offered a 45-minute walking tour of the farm. Henry takes the group out the back door and into the barn.

Rooster in hand Henry describes the farm’s horses pigs and bunnies and explains Maud rescued some of the animals.

Back in the kitchen Heather and Maud along with Shawn Underwood and Amy Siler of Heart and Vine Catering continue to prep dinner.

They start with appetizers: smoked salmon spread on cucumbers with cream cheese dill and lemon.

“It’s going to be fresh and light — nice and cool for a hot night ” Shawn says.

Sixteen guests sit around a long wooden table as they dine on the back porch. A burlap table runner and napkins rolled with clothespins add to the ambiance. Three elderly guests dine indoors in the sitting room to avoid the summer heat.

Maud and Heather serve the appetizers on white porcelain plates and top off the guests’ Mason jars of water.

“This is fresh mozzarella made in Shallotte ” Amy says.

Herb Harton plays bluegrass renditions of Ben E. King’s “This Magic Moment” and “Save the Last Dance for Me.”

The main course pan-seared duck breast is topped with cranberry coulis. On the side guests enjoy farm-grown green beans with almond slivers along with purple and red potato sticks.

“We work closely with our chefs for most of the menu ” Maud says. She finds locally raised grass-fed duck in Shallotte — a process she refers to as a duck hunt.

“We’ve been homestead farming. This is our lifestyle. We’re living out our master plan ” she says. “We met at Michigan State in 1971. I was in pre-med and he was in horticulture. I switched my major to landscape architecture and horticulture. �We’ve been pretty much self-employed ever since.”

“Heather has been more instrumental in that ” Henry says. “She kind of brought me along with organics and the value of quality food. It took me a little while to get out of my old ways to something that was convincingly better.”