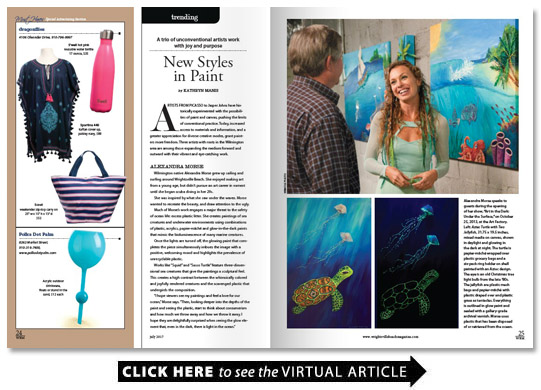 A trio of unconventional artists work with joy and purpose

Artists from Picasso to Jasper Johns have historically experimented with the possibilities of paint and canvas pushing the limits of conventional practice.Today increased access to materials and information and a greater appreciation for diverse creative modes grant painters more freedom.Three artists with roots in the Wilmington area are among those expanding the medium forward and outward with their vibrant and eye-catching work.

Wilmington native Alexandra Morse grew up sailing and surfing around Wrightsville Beach. She enjoyed making art from a young age but didn’t pursue an art career in earnest until she began scuba diving in her 20s.

She was inspired by what she saw under the waves. Morse wanted to recreate the beauty and draw attention to the ugly.

Much of Morse’s work engages a major threat to the safety of ocean life: excess plastic litter. She creates paintings of sea creatures and underwater environments using combinations of plastic acrylics papier-m�ch� and glow-in-the-dark paints that mimic the bioluminescence of many marine creatures.

Once the lights are turned off the glowing paint that completes the piece simultaneously imbues the image with a positive welcoming mood and highlights the prevalence of unrecyclable plastic.

Works like “Squid” and “Sasso Turtle” feature three-dimensional sea creatures that give the paintings a sculptural feel. This creates a high contrast between the whimsically colored and joyfully rendered creatures and the scavenged plastic that undergirds the composition.

“I hope viewers see my paintings and feel a love for our ocean ” Morse says. “Then looking deeper into the depths of the paint and seeing the plastic start to think about consumerism and how much we throw away and how we throw it away. I hope they are delightfully surprised when seeing the glow element that even in the dark there is light in the ocean.”

Allison Hunt Cooper’s artistic inspiration blossomed as a child when she visited her grandparents in Wilmington.

“Grandmama would buy us canvases in bulk paint brushes and loads of paint whenever we came to visit ” says Cooper who was known by her maiden name Allison Ester before her June 2017 wedding to Andrew Cooper. “They lived in a beautiful house that my Poppa built in Shandy Point right across the street from the sound. Pulling onto Skystasail Drive made my sisters and me so excited because we knew so many new adventures awaited us. These were some of the best days of my life. I loved being able to swim in the basin take the boat to dinner build forts next to the marsh and take walks to feed the ducks under the trees flowing with Spanish moss. This is where my inspiration to paint all started.”

Cooper’s works reflect her positive and enthusiastic personality. Using bright engaging color palettes and loose brush strokes she channels her zeal for life into every painting she creates.

Unique in Cooper’s oeuvre is her “Paint your Wedding” series. She often positions herself on-site during a ceremony to capture the joy of the moment in situ. The resulting paintings teem with happiness and celebration.

Commissioned paintings depicting beloved homes and pets and creative compositions of flora and fauna are hallmarks of Cooper’s practice. Painting in layers beginning with the background and laying subject matter on top after Cooper achieves impressive vibrancy.

“I paint because it allows me to bring joy to other people ” she says. “Delivering a painting to a happy customer is one of the best feelings in the world.”

Gabriel Lehman an Indiana native lived in Wilmington when his painting career began in 2009.His imaginative murals can be seen at Duck & Dive Pub on Dock Street and Chops Deli in Monkey Junction and he describes the area and local community as “elemental” to his beginning as an artist.

Lehman is self-taught and has developed an impressively detailed and wildly creative style.His images tread the line between realism and illustration featuring youthful figures in fantastical fairytale-like settings.

“When I was a kid I enjoyed surrealism and cartoons so my style developed into ‘illustrative surrealism.’ I draw inspiration for subject matter from things that I see and the intention behind my work is to evoke a childlike nature and sense of wonderment ” he says.

He paints figures amid unexpected components colors and details creating a sense of contrast that is enhanced by his use of light and shadow.

“I paint light ” he says. “My focus has always been the shape and color of light as it reflects. I feel as though I am always studying when I’m looking around because I don’t use visual references; I pull from my mental study.”

Lehman’s figures have slightly exaggerated facial features drawing one’s eye to their expressions. Their often-wide eyes contribute to the sense of wonder that Lehman instills in every composition. They can be seen floating through dream-like landscapes climbing in star-filled skies and chasing odd unexpected creatures.

He works in liquid acrylics on canvas and recently began using oil on linen.Choosing large format canvases — his favorite size is 2 feet by 4 feet — Lehman transports viewers into the worlds of imagination and joy he creates.

“Oftentimes when people walk in to look at the work they just smile ” he says. “Some even cry. When you talk with people while they’re viewing the work their inner child comes out which makes me incredibly happy.”

“Crystal Pier” was inspired by time spent at Wrightsville Beach. This painting showcases an impossibly bright red-and-orange skyline with large rolling clouds. A young man sits on the edge of a pier and with ecstatic surprise reels in a fish that is twice his size. The image conveys the sense of possibility and delight inherent to the Wrightsville area and emanates a nostalgia that childhood beach-goers will recognize.

Lehman’s wife Jamie is integral to his practice. The two have been together since he illustrated a children’s book she authored.

“I love doing illustration ” he says. “The project came together so well I married her.”