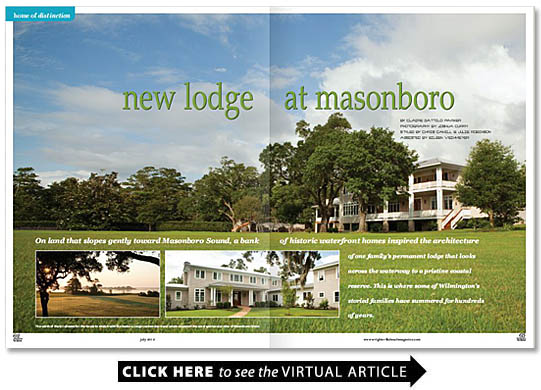 In Hewlett Crockett’s “Between the Creeks ” the seminal history of the area she states that these lands were the location of Finian Plantation William Hooper’s former estate. Hooper a signer of the Declaration of Independence was a Boston attorney sent to Wilmington to create a North Carolina foothold for the American Revolution. In the woods behind his plantation was the state’s first Masonic Lodge named Soloman’s Lodge.

Hooper’s lands were acquired by the Parsley and Peschau families on which Jane Parsley and husband Captain Henry Russell Savage built the Wigwam their summer home in 1873 which remained in their family until 1941.

“If you go down Masonboro Sound Road you find simple lines and a hip roof ” says homeowner Richard Johnson from the lawn of his rambling new home. This is where Johnson and his wife Carole knew they wanted to be. They bought two pieces of adjacent property in 2002. Three years later in 2005 the couple and their children moved into a house that only afforded a view of the water from a slim spot on the staircase.

“We used to sit on the stairs and have our coffee just to peek at the view ” Carole says.

When the couple decided to build they moved the neighboring house to clear the land. On that land Richard built a treehouse at the exact elevation of the new home’s ground floor as a reminder of the view they were seeking.

He says they poured over thousands of plans. Working with five different architects during the course of 10 years floorplans elevation renderings and revisions were drawn before they developed a coastal design that incorporates some grand scale dimensions borrowed from the family’s summer home at Eagle’s Mere Pennsylvania: a lodge-style parent home in New Jersey and the simple functionality of a Greek Revival house at Poplar Grove Plantation. In the end they chose to stretch the house out horizontally across the lot to maximize the views.

“The view here is what is special — and why we spread the house out goes back to taking advantage of those views. So many people say they could sit and stare all day ” Richard says.

Construction began in 2009 with Carole and Richard directing the project and a team of friends and well-researched tradesman executing the details.

“Do you know the story about the walnut floors that were

flew in on a regular basis to make sure the plans were being built to the Johnsons’ expectations. “There are a lot of stories behind many aspects of the house ” he adds.

From the Iowa-logged walnut floors to the period-style Bendheim Restoration Glass® hand blown in Germany the Johnsons went to great lengths to incorporate architectural aspects that would have been true to Antebellum style waterfront homes and the traditional elements they loved.

“People like Richard and Carole want quality so they did a good job of picking personalities and doing research and checking people out ” says David Vann of Cynergy Construction. “That caliber of house brings in the best.”

Richard calls Vann the “Michelangelo of finished carpentry” and hired him to “dress the bones of the house in exquisite detail.” Vann created 26-foot-long cypress beams in the kitchen from separate boards that appear to be solid pieces of wood because the seams are invisible.

Carpenter Jim Miles built all of the paneling in the house and is credited with hiding the guest suite door within the lines of the living room panels without disturbing the visual impact of the fireplace elements of which — mantels pilasters and tile surrounds — were salvaged from Carole’s grandmother’s house in Virginia and rebuilt on a larger site.

Local craftsmen worked with out-of-state masons and builders in a broad mix of Eastern Seaboard expertise. The Johnsons say the melting pot of workers fused into a well-oiled machine that produced an exceptional result.

“I was a headhunter for 20 years and have a lot of experience hiring people. When you hire people you are hiring their character and we were fortunate in this case that everyone was a good person ” says Richard a 1990s Internet entrepreneur. Richard has recently created a nonprofit group to preserve Masonboro Island where he walks with his dogs weekly.

Carole says building the house was a full-time job for three years but it didn’t take them long to unwind and enjoy the beauty of what they created when they moved in August 2011.

“It’s our own little paradise ” she says. “The view calls you out there and it was in our hearts to be here.”

The house is serenely white with punctuations of tans blues and greens to accentuate its coastal semblance. The windows doors and screens are all large clear and views are unobstructed save a minor interruption by the massive oak that anchors the front lawn. Porches wrap the waterfront exterior. Shading the warm summer sun they are made inviting with hanging beds and screened-off escapes where the Johnson children do homework or play.

Large-scale rooms evoke the family lodge that Richard loves. Their wide hallways create the perfect paths for sea breezes to travel: “I don’t want to have to turn on the air conditioning ” Richard says. “It’s all about the transoms and windows and views and land and breezes.” He sits back and relaxes into an explanation of details that illustrate the couple’s deliberate dedication.

“This is where we spend all our time ” says Carole as she opens a door to a screened outdoor kitchen and living room complete with a fireplace and a window that rises and falls on a pulley system. Devised by Richard it allows the passage of food from the grill to the porch.

“We wanted it to be casual but with touches of traditional formality ” Carole says. She worked with designer Julie Robinson of Airlie Moon to help marry the two styles.

“I love how there are parts of the house that are quite traditional and formal but I like that it’s not too precious and that everything is livable ” Robinson says. “It’s not a don’t-touch house.”

In fact much of the house has a genteel feel that was achieved by the addition of older elements. Refurbished vintage chandeliers by Louise Gaskill light the way and SAC Art provided scores of old doors that wear the patina of time like a treasured piece of driftwood. The doors were sanded but otherwise left distressed with bits of paint and nicks and scratches. They hang throughout the house creating a cast of characters that are as interesting as the views they open to.

“If we were in a different place we would have designed a different house ” Richard says. “But this is an interactive view. It calls you out to embrace life on the water.”

Resources
(Creating this home of Distinction)