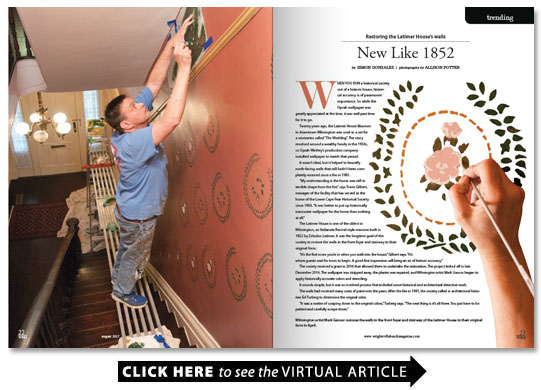 When you run a historical society out of a historic house historical accuracy is of paramount importance. So while the Oprah wallpaper was greatly appreciated at the time it was well past time for it to go.

Twenty years ago the Latimer House Museum in downtown Wilmington was used as a set for a miniseries called “The Wedding”. The story revolved around a wealthy family in the 1950s so Oprah Winfrey’s production company installed wallpaper to match that period.

It wasn’t ideal but it helped to beautify north-facing walls that still hadn’t been completely restored since a fire in 1981.

“My understanding is the home was still in terrible shape from the fire ” says Travis Gilbert manager of the facility that has served as the home of the Lower Cape Fear Historical Society since 1963. “It was better to put up historically inaccurate wallpaper for the home than nothing at all.”

The Latimer House is one of the oldest in Wilmington an Italianate Revival-style mansion built in 1852 by Zebulon Latimer. It was the longtime goal of the society to restore the walls in the front foyer and stairway to their original form.

“It’s the first room you’re in when you walk into the house ” Gilbert says. “It’s where guests wait for tours to begin. A good first impression will bring an air of historic accuracy.”

The society received a grant in 2016 that allowed them to undertake the restoration. The project kicked off in late December 2016. The wallpaper was stripped away the plaster was repaired and Wilmington artist Mark Gansor began to apply historically accurate colors and stenciling.

It sounds simple but it was an involved process that included some historical and architectural detective work.

The walls had received many coats of paint over the years. After the fire in 1981 the society called in architectural historian Ed Turberg to determine the original color.

“It was a matter of scraping down to the original colors ” Turberg says. “The neat thing is it’s all there. You just have to be patient and carefully scrape down.”

“There was an area under the stairway where the stencil pattern had been saved ” he says. “I looked at that and matched the colors.”

Turberg also provided cultural evidence by including the background for the color and pattern choices.

“His report quoted a man named Andrew Jackson Downing the landscape architect who designed the National Mall ” Gilbert says. “He wrote a book in 1850 called ‘The Architecture of Country Houses including Designs for Cottages Farmhouses and Villas.’ It really speaks about how in this era wealthy families were taking grand tours of Europe and they were learning about excavations of villas where they were uncovering painted frescoes in homes. That’s what they were trying to replicate here with the vines and the flowers. That report really speaks about that along with the tangible evidence of the samples.”

The evidence gave the society confidence that the Latimer House would now be historically accurate — which helped offset reservations that the original color might not be aesthetically pleasing to the modern eye.

“Tastes change. Fashions change ” Gilbert says. “You want it to look like it did in 1852. It’s hard to divorce yourself enough from the project to be content with a color that might not be your first choice. But it was Zebulon Latimer’s first choice. They really wanted to play on nature. Everything was dark and natural colors.”

There was a time when recreating the original color would have involved trial and error especially for a reddish-brown hue.

“In the past it was difficult getting the maroon colors right ” Turberg says. “You’d be adding a tint adding a tint. If you didn’t have enough it looks barn red. Too much and it’s brown. It could be very tedious.”

Modern technology including lasers identifies and creates the original colors precisely. That made the painting of the Latimer House walls fairly straightforward. The stenciling though proved to be more challenging.

Local historian Robert Warren had discovered a photo of the pattern in the society’s archives that showed a repeated pattern of flowers surrounded by a leafy vine.

“It showed a border around the ceiling wreaths in the middle of it ” Gansor says. “It’s like a wallpaper repeat. It repeats endlessly.”

Gansor took the photograph scanned it and created a stencil. He then began the work of recreating it on the walls completing the painstaking project in April.

“I am tickled to death they have hired me to do this job ” he says. “I love to do it but after a while your shoulder starts to throb. You look at the wall and see how big it is and look at the stencil and see how small it is. But it’s really going to be spectacular.”

And just as important for the venerable house historically accurate.