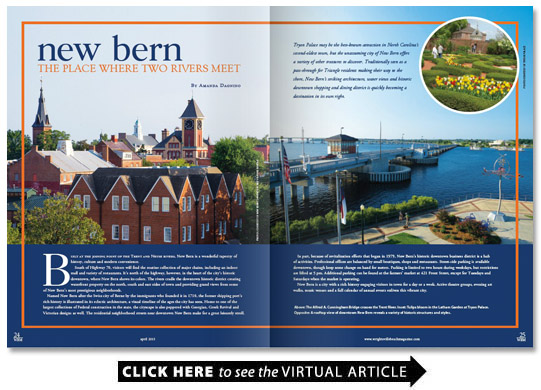 Tryon Palace may be the best-known attraction in North Carolina’s second-oldest town but the unassuming city of New Bern offers a variety of other treasures to discover. Traditionally seen as a pass-through for Triangle residents making their way to the shore New Bern’s striking architecture water views and historic downtown shopping and dining district is quickly becoming a destination in its own right.

Built at the joining point of the Trent and Neuse rivers New Bern is a wonderful tapestry of history culture and modern convenience.

South of Highway 70 visitors will find the routine collection of major chains including an indoor mall and variety of restaurants. It’s north of the highway however in the heart of the city’s historic downtown where New Bern shows its colors. The rivers cradle the downtown historic district creating waterfront property on the north south and east sides of town and providing grand views from some of New Bern’s most prestigious neighborhoods.

Named New Bern after the Swiss city of Berne by the immigrants who founded it in 1710 the former shipping port’s rich history is illustrated in its eclectic architecture a visual timeline of the ages the city has seen. Home to one of the largest collections of Federal construction in the state the cityscape is also peppered with Georgian Greek Revival and Victorian designs as well. The residential neighborhood streets near downtown New Bern make for a great leisurely stroll.

In part because of revitalization efforts that began in 1979 New Bern’s historic downtown business district is a hub of activities. Professional offices are balanced by small boutiques shops and restaurants. Street-side parking is available downtown though keep some change on hand for meters. Parking is limited to two hours during weekdays but restrictions are lifted at 5 pm. Additional parking can be found at the farmers’ market at 421 Front Street except for Tuesdays and Saturdays when the market is operating.

New Bern is a city with a rich history engaging visitors in town for a day or a week. Active theatre groups evening art walks music venues and a full calendar of annual events enliven this vibrant city.

Embark on the Bear Tracks Hunt and pose for a photo op with one of 50 life-sized bear statues painted by local artists and clubs during the town’s 300th birthday celebration in 2010. They now stand in the downtown and surrounding area.

Hunt for the perfect a souvenir from Carolina Creations at 317-A Pollock Street where the walls are lined with original glass pottery clocks metalwork handmade jewelry wood carvings traditional oils acrylics and more. Owned by Jan and Michael Francoeur the gallery features the work of some 300 local artists including their own.

Walk to Christ Church a structure on the National Register of Historic Places at 320 Pollock Street in the center of downtown’s historic district. Its Gothic bell tower has been a famous town landmark — once used by mariners for navigation — for more than 130 years.

Sleep dine or dance at The Harvey Mansion one of New Bern’s last remaining colonial-era structures. What was once the 9 000-square-foot home of ship merchant John Harvey is today a four-story restored building that houses a fine-dining restaurant guest rooms and a popular nightspot in its open beam and brick basement.

Enroll in a paint-your-own pottery program or lesson at Accidental Artist 219-A Craven Street and take home a self-creation. No experience is necessary and for out-of-town visitors the studio can ship your pottery home.

Visit the New Bern Firemen’s Museum at 408 Hancock Street the site of the town’s first central fire station. New Bern’s original firefighting crew the 1845 Atlantic Hook and Ladder Company was the first organized fire department in the state and one of the first in the country.

Dine on award-winning cuisine prepared by chef Gerry Fong while taking in the waterfront view at Persimmons.

Shop at the eclectic Mitchell Hardware famous for its free gift wrap and excellent service and in business since 1898. Fill your basket with everything from postcards to yard tools and don’t skip the wide selection of old-fashioned candy.