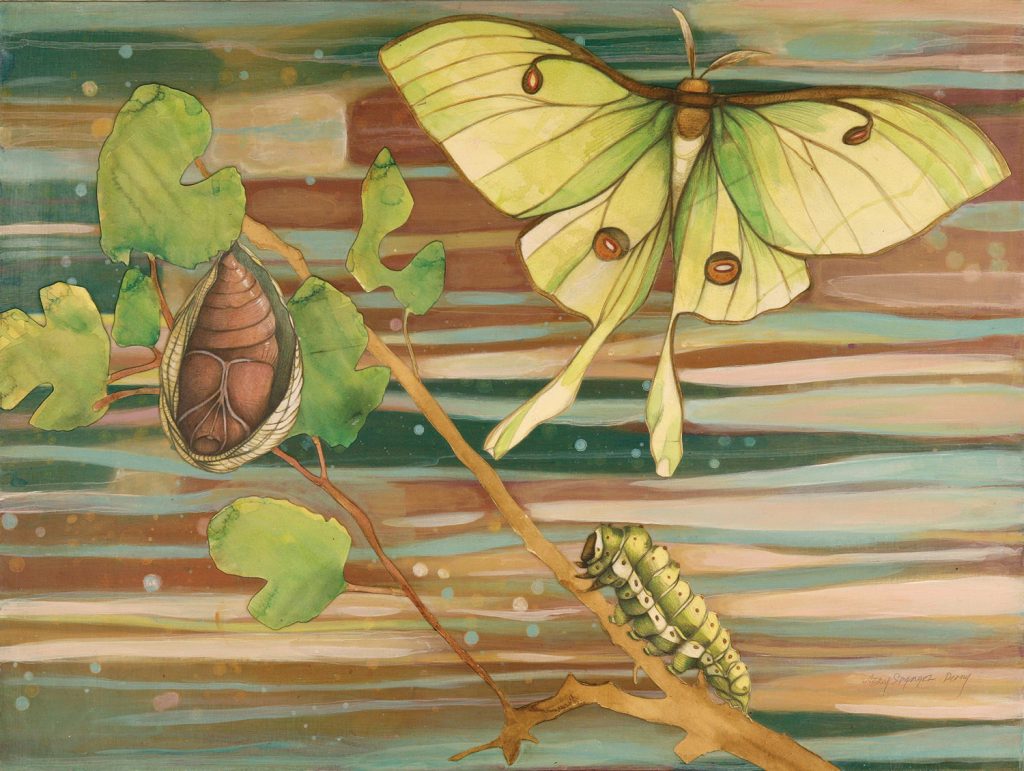 In a busy, modern world, taking the time to fully appreciate a work of art almost seems decadent. The effect is compounded when contemplating works with a high degree of intricacy, such as the art of Abby Spangel Perry.

On the surface, Perry’s art is vibrant and richly detailed. It is impossible not to recognize the significant amount of time and effort invested. Drawing inspiration from antiquated depictions of nature that were used in teaching biology and science, Perry creates visually appealing works of striking detail and clarity.

Diving deeper, it becomes clear that Perry’s art is more than just pretty pictures of plants, animals and birds.  Her images of jellyfish, pigeons and sparrows draw attention to the delicate balance in the natural world, the line between hope and vulnerability, neglect and destruction.

“Nature is a starting point for me,” Perry says. “I like to raise awareness about broader issues through my art. That is something that engages me intellectually.”

Calling attention to the misuse of nature as a commodity and the impact of human interaction on the smallest organisms and plants is a motivator. Her work often centers on our societal ambivalence toward nature. Instead of a black-and-white dichotomy, Perry’s art shows that the interests, attitudes and goals of groups that care about nature often intersect.

Martha the Passenger Pigeon is interesting for its similarity to the cover of The Goldfinch, Donna Tartt’s Pulitzer-Prize winning novel. The attention to detail draws the viewer in.

Martha was an endling, the last known individual of a species. Her story is an early example of conservation efforts.

In the early 1900s, University of Chicago professor Charles Whitman recognized the population of once prevalent passenger pigeons was facing a steady decline. To establish a stable population, Whitman attempted to breed some of the survivors. He was unsuccessful but his efforts raised awareness about extinction issues across the nation. At one point, there was even a $1,000 reward for anyone who could find a mate for Martha.

After her death at the Cincinnati Zoo in 1914, Martha was preserved as a taxidermy mount for display in the Smithsonian National Museum for Natural History. She was exhibited at the museum for around 50 years, though she occasionally appeared in various displays around the nation.

In the modern era, Martha has become a symbol of efforts to reintroduce extinct species using synthetic biology.

The concept of rewilding the planet is something a lot of people get behind. Returning a native poulation like wolves to the wild is something that many conservations cheer. Bringing other species back from extinction could be an effective means of bringing ecosystems back to balance. But concerns that rewilding through genetic engineering or the reintroduction of native species could cause a wide array of unforeseen problems are not uncommon.

The seemingly surface-level portrayal of Martha has much more depth and complexity than initially meet the eye, making it a good introduction to Perry’s work.

Any native of Southeast North Carolina will likely have a memory centered on the sea mushrooms depicted in Perry’s “Cannonball,” as they are the perfect size and shape to hurl at family and friends.

Similar to much of her work, the subject warrants further investigation. In “Jellybunny,” Perry illustrates that the idea of inserting bioluminescent genes into rabbits is being considered. Anyone under the age of 10 would never question the wisdom of creating a glow-in-the-dark bunny, but that doesn’t mean it should happen.

“I have always been intrigued by the line between attraction and repulsion, the creepy versus the cute,” Perry says.

With “Medusoid,” Perry communicates that genetic engineering could someday be used to splice jellyfish DNA into a human heart. Since the movement of jellyfish in the water is similar to the ticking of a human heart, doing so could repair heart issues.

“In many cases, it may seem like we are doing something good for society, but what are the results?” she says. “A lot of my work is centered on the idea that messing with nature could have unintended consequences.”

It almost seems possible to hear the call of the sparrow depicted in the work of the same name. The subject in the foreground is a vibrant, real-life representative of the common bird everyone knows. The M.C. Escher-like background serves as a further distraction from the hand grenade egg in the nest.

In this work, which is more confrontational than her other pieces, Perry shows the sparrow is an invasive species. Aggressive and dominant, they push other species’ eggs out of the nest and take over. An aspect of Perry’s thinking was that one screaming bird in a nest can suddenly become a background full of birds, an avian armada.

A Lifetime Spent in Study of the Natural World

Perry grew up in rural Pennsylvania. She was 5 years old and several miles upwind when the nuclear reactor at Three Mile Island malfunctioned on March 28, 1979.  Some of her memories of the event had slipped away until one day when a girl a few grades ahead of her died from lymphoma.

A few years later more of her peers had died from other complications. In a lawsuit filed against the Nuclear Regulatory Board, however, radiation exposure was thrown out because of a lack of scientific evidence. It was not until 1996 that a study by the University of North Carolina at Chapel Hill reevaluated the data, finding radiation fallout had an impact on public health.

“These experiences changed my perceptions at an early age and caused me to continually question our society’s actions in regard to the environment,” Perry wrote in her graduate thesis.

A graduate of East Carolina University, where she earned a Master of Fine Arts, Perry is an art instructor at Cape Fear Community College. She integrates images into her art and teaching to communicate broader messages effectively.

“It shouldn’t be surprising for anyone to learn I’m a visual person,” she jokes.

Though she enjoys coordinating shows at the CFCC gallery, producing and selling art became secondary after she had her son. Now that he is eight and needs less attention, she is looking forward to spending more time in the studio at her Wilmington home.

“The Cape Fear region has so much to offer,” Perry says. “Of course, everyone loves the beaches and the river for their natural beauty, but I think people overlook some of the little things.”