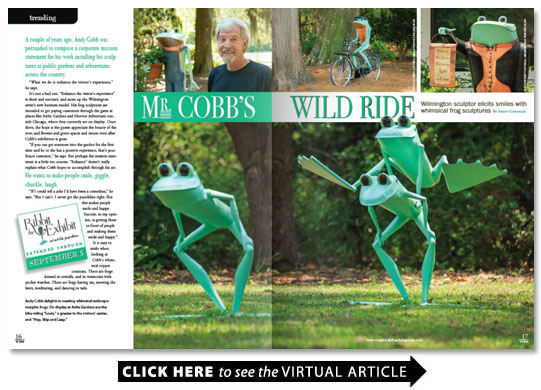 A couple of years ago Andy Cobb was persuaded to compose a corporate mission statement for his work installing his sculptures at public gardens and arboretums across the country.

“What we do is enhance the visitor’s experience ” he says.

It’s not a bad one. “Enhance the visitor’s experience” is short and succinct and sums up the Wilmington artist’s new business model. His frog sculptures are intended to get paying customers through the gates at places like Airlie Gardens and Morton Arboretum outside Chicago where they currently are on display. Once there the hope is the guests appreciate the beauty of the trees and flowers and green spaces and return even after Cobb’s exhibition is gone.

“If you can get someone into the garden for the first time and he or she has a positive experience that’s your future customer ” he says. But perhaps the mission statement is a little too concise. “Enhance” doesn’t really explain what Cobb hopes to accomplish through his art.

“If I could tell a joke I’d have been a comedian ” he says. “But I can’t. I never get the punchline right. But this makes people smile and happy. Success in my opinion is getting these in front of people and making them smile and happy.”

It is easy to smile when looking at Cobb’s whimsical copper creations. There are frogs dressed in overalls and in waistcoats with pocket watches. There are frogs having tea mowing the lawn meditating and dancing in tails.

“I think tails and pocket watches are fun. I think overalls are fun ” he says. “What’s fun about overalls? I don’t know. But they are.”

There’s a pensive frog in the classic “Thinker” pose.

“This is what would have happened if Rodin had made more frogs ” Cobb says.

His frogs range from about 4-7 feet tall. No matter the size or the pose they have something in common. All have a smile on their face looking like they’re enjoying life.

“They are always smiling no matter what’s happening ” he says.

There are 48 smiling frogs bringing grins to the faces of garden patrons in Ribbit the Exhibits in Illinois and North Carolina. The original group of 23 — Ribbit I — is on display at Morton Arboretum. The 25 frogs of Ribbit II made their debut appearance at Airlie Gardens where they are scattered around the grounds’ 67 acres through September 5.

Cobb got his start as an artist by selling sculptures at art shows and through commissions but the exhibits became his direction about five years ago.

“I realized that public gardens around the country — and there’s 900 of them approximately — are looking for exhibits to bring people through the gates ” he says. “The first one I did was in Fayetteville. The director saw my work and asked me if I wanted to show. Then after I did that one for free she explained to me that people make a living doing this.”

The words are spoken with a chuckle. There are no hard feelings. Cobb called her later to thank her for getting him started.

After a couple of years of trial and error trying to find more places to showcase his work he joined the American Public Gardens Association.

“That was the key that unlocked this as a viable business for us ” he says. “It’s a national organization. It’s the best way I know to contact what is my customer the botanical gardens and arboretums of the world. Even though I love building the frogs my real focus and business is now taking Ribbit I and Ribbit II around the country.”

The gardens lease the sculptures usually for three months although the Morton Arboretum had a six-month contract and the frogs have been frolicking at Airlie for four months. Then Cobb picks them up and takes them back to his studio on Market Street where they get a thorough cleaning and any necessary repairs before going back out on the road.

“We have to make them like new again ” he says. “So I have to bring them back in spiff them up and get them back out.”

Cobb is beginning to fill up his calendar with bookings. There’s a return engagement in Fayetteville in the works — this time for money — and one at the Cape Fear Botanical Garden.

Next spring and summer Cobb’s frogs will be at Brookgreen Gardens outside Myrtle Beach.

“That’s probably one of the top 10 sculpture gardens in the world ” he says. “I love it. Even before I started sculpting I was going down there. It is a premier garden. I couldn’t believe it when they called us. As far as I’m concerned I could quit right now.”

Cobb is prepared to load the truck and drive the frogs all over the country but he likes the shows close to home so he can see people enjoying his art.

“Nobody knows who I am and I get to watch the reactions ” he says. “You get a bunch of kids running through the garden screaming and yelling and trying to find the frogs and that’s just the best. My favorite thing is when they come up to a frog and go ‘Come here you’ve got to see this!’ They call somebody over and then they start discovering the hand gesture or the binoculars or something. They are discovering my art a piece at a time which is exactly what I want them to do. I hear artists talk about they don’t care if other people like their work or not but I think that’s important. The idea has to transcend. It doesn’t have to be the same idea I had but they are going to get something from it. I have to move them in some way. That’s the whole cycle of art.”

Cobb is somewhat of an accidental artist. He was in his late 30s and had a successful career in medical equipment sales when a neighbor an Episcopal priest urged him to take up art.

“He said ‘In order to find yourself you need to do art ‘” Cobb says. “I said ‘I can’t do art. They laughed at my stuff in the second grade.’ But he insisted. So we got every kind of art supply there was. And I was right. I can’t paint. I can’t draw. But we got five pounds of clay and I had this idea in my head about a sailfish jumping out of the water. Darn if I didn’t get it. I started squishing this stuff and at the end it looked just like what I had in my head.”

Looking for something that would last longer than unfired clay he learned how to work with copper. Cobb began with fish and birds. And then he read “The Wind in the Willows ” the 1908 novel by Kenneth Grahame featuring the adventures of Badger Mole Ratty Otter and of course the iconic Mr. Toad.

“It was the anthropomorphic aspect of the animals that captured me ” he says. “It pulls you along in the story.”

“It turns out after I did mine it didn’t look anything like him didn’t even have the same outfit ” he says. “I took him around for about a year to shows. Nobody bought him. The price tag was a little high for an impulse buy. But it still got people excited and laughing and smiling. Nothing I’d ever done before had gotten that kind of reaction.”

The response encouraged Cobb to try again. He sculpted five more frogs for an art show.

“My wife said ‘Are you crazy? You didn’t sell the first frog.’ I said ‘I know but I’ve got this feeling.’ They sold in two weeks and I had to go back and make more ” he says. “That was the beginning. People like frogs. Anthropomorphic frogs. We love animals that act like people. Walt Disney animated anthropomorphic animals. They have hands they talk they act like people. And I love that. The idea that I could do a rodeo frog with a Stetson hat it appeals to people and it makes me laugh.”

The frogs are a perfect fit for the gardens. They look like they belong when they’re installed in or near water under trees on lawns or beside flowers. Some of the gardens didn’t see it that way at first though.

“A lot of these gardens thought they were too whimsical or silly ” he says. “But they speak to everybody. You just see it on a different level. There are things I put in here that kids aren’t going to get. Hand gestures holding the teacup. Kids aren’t going to understand that. But I had a good time doing it.”

Cobb’s joy in creating is obvious. It’s as plain as the smile on the frogs’ — and the garden patrons’ — faces.