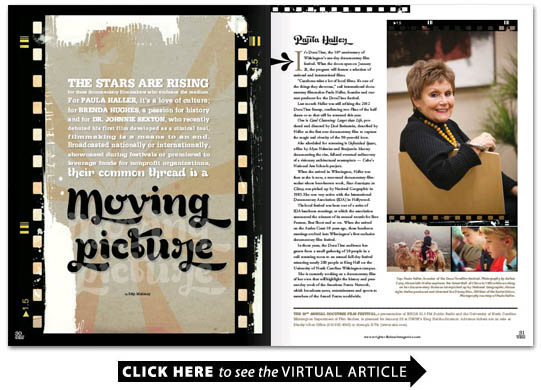 The stars are rising for three documentary filmmakers who embrace the medium. For Paula Haller its a love of culture; for Brenda Hughes a passion for history and for Dr. Johnnie Sexton who recently debuted his first film developed as a clinical tool filmmaking is a means to an end. Broadcasted nationally or internationally showcased during festivals or premiered to leverage funds for nonprofit organizations their common thread is a moving picture.

Its DocuTime the 10th anniversary of Wilmingtons one-day documentary film festival. When the doors open on January 28 the program will feature a selection of national and international films.

“Cucalorus takes a lot of local films. Its one of the things they showcase ” said international documentary filmmaker Paula Haller founder and current producer for the DocuTime festival.

Last month Haller was still refining the 2012 DocuTime lineup confirming two films of the half dozen or so that will be screened this year.

One is Carol Channing: Larger than Life produced and directed by Dori Berinstein described by Haller as the first ever documentary film to capture the magic and vivacity of the 90-year-old icon.

When she arrived in Wilmington Haller was then as she is now a renowned documentary filmmaker whose best-known work Four Americans in China was picked up by National Geographic in 1985. She was very active with the International Documentary Association (IDA) in Hollywood.

The local festival was born out of a series of IDA luncheon meetings at which the association announced the winners of its annual awards for Best Feature Best Short and so on. When she arrived on the Azalea Coast 10 years ago those luncheon meetings evolved into Wilmingtons first exclusive documentary film festival.

In those years the DocuTime audience has grown from a small gathering of 50 people in a caf screening room to an annual full-day festival attracting nearly 200 people at King Hall on the University of North Carolina Wilmington campus.

She is currently working on a documentary film of her own that will highlight the history and present-day work of the American Forces Network which broadcasts news entertainment and sports to members of the Armed Forces worldwide.

The 10th annual DocuTime Film festival a presentation of WHQR 91.3 FM Public Radio and the University of North Carolina Wilmington Department of Film Studies is planned for January 28 at UNCWs King Hall Auditorium. Advance tickets are on sale at Sharkys Box Office (910-962-4045) or through E-Tix (www.etix.com).

A former news anchor/reporter for NBC affiliates in Washington DC and Richmond Virginia and one of the first female sports reporters in the southeast Hughes found herself listening to the story of 76-year-old Betty Vrancken on the Thanksgiving weekend of the same year she founded WetBird Productions.

Vranckens story was about her adoption of the grave of an American soldier buried near her hometown in The Netherlands in 1946. The soldier was Eddie Hart and out of gratitude to the American military for her freedom following four years of Nazi occupation Vrancken committed herself to visiting the young mans grave regularly with fresh flowers.

“It was clear ” Hughes notes on her website “that her commitment to this soldier and her appreciation for the gift of freedom was as strong as ever. I knew her story needed to be told.”

“I just pursued what I felt was a fantastic story ” she adds of Vranckens tale.

Following her next major production Sing Behind the Plow (2007) for UNC-TV which focused on a folk school founded in rural Brasstown North Carolina in 1925 Hughes returned to the subject of WWII and premiered North Carolinas World War II Experience in 2010. A tapestry of tales about North Carolinian participants in the war Hughes says it offers a better understanding of “not only a state and its people but a time and generation [that] responded when their country needed them.”

Hughes most recent WWII documentary was her independent production of Marching Once More which though begun in 2004 became an official selection of the Cucalorus Film Festival in 2008. It premiered on UNC-TV in January 2011 and in November began national distribution. Like its predecessor Marching Once More could trace its origins to the emergence of a fantastic story the return of veterans of the Battle of the Bulge to Belgium and Luxembourg for the 60th anniversary of that fight. Marching Once More received Midsouth Regional Emmy Nominations for Historical Documentary and an editing nomination for Hughes associate Adam Alphin. Hughes also received two more nominations for North Carolinas WWII Experience for Historical Documentary and writing.

Today once again working in collaboration with UNC-TV she is pursuing yet another fantastic stor about the opening of the North Carolina mint. With a working title The Bechtler Mint the documentary tells the tale of German immigrant Christopher Bechtler who joined the gold rush to North Carolina well ahead of the more familiar rush to California and eventually ended up minting the countrys first $1 gold coin.

Huges hopes to wrap up principal photography this month and awaits an official UNC-TV release date.

Like Brenda Hughes it was a compelling story that led Dr. Johnnie Sexton to pursue his profession and his passion but Sexton developed his first film as a clinical tool. He is first and foremost the owner and operator of a private audiology practice in Wilmington where for many years he has worked with hundreds of children with varying degrees of hearing impairment. It is a vocation born literally of a chance set of circumstances.

In the early 1950s when Sexton was still a toddler a child also named Johnnie was born across the street from where he lived in Garland North Carolina. The younger Johnnie was profoundly deaf and when at the age of five that Johnnie was sent to live 300 miles away at the North Carolina State School for the Deaf Johnnie Sexton was witness to the challenges that family bore. Later at college Sexton volunteered as an intern for a pre-school class for deaf children.

“That was all it took ” Sexton says.

He worked for years with several of the children he met through the internship and his career path snapped into focus. As time went on Sexton noticed that in addition to the challenges for patients with hearing impairments there were serious challenges for their families; challenges which for the most part were unaddressed.

He saw a real need to address their emotional grief journey through a documentary film.

In 2009 Sexton began developing The CARE Project a global initiative which uses a film to provide support and redefine counseling for hearing impaired patients and their families. To make the film he turned to friends in the film industry and with cameras and audio equipment began to document the tales of individual families recording with their permission the details of their private emotional grief journeys.

The result a 56-minute film entitled Journeys to Resilience premiered at the Brooklyn Arts Center in September 2011.

“It was an opportunity to record family experiences and share them with newer families to bring them a sense of comfort connection and a sense of community ” Sexton says.

“Not only did this premiere event provide capital (for the CARE Project) but it fueled my enthusiasm for using documentaries as tools ” he says.

The extent to which the film provided other families of hearing-impaired relatives with a strong sense of community led Sexton to purchase film equipment specifically for the CARE Project. He is currently considering other ways to film projects.

In November he brought the new film equipment along for an 11-family retreat on Bald Head Island. He is in communication with other disability communities about ways to use documentary filmmaking as a clinical tool. Sexton will continue to divide his time between travel schedules for CARE Project lectures and workshops and the development of ways to broaden usage of documentary film for a variety of other disability communities.

“From now on Ill be documenting things on film ” Sexton says.

Marimar McNaughton and Jenny Yarborough contributed to this story.