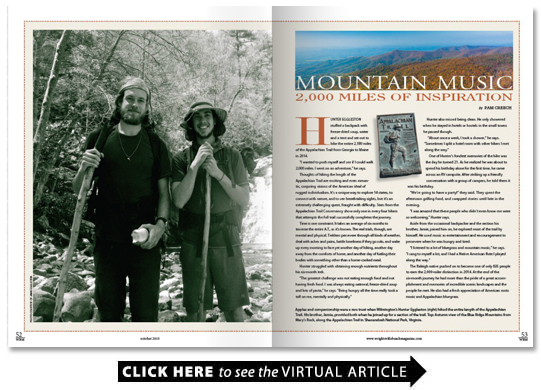 Hunter Eggleston stuffed a backpack with freeze-dried soup water and a tent and set out to hike the entire 2 180 miles of the Appalachian Trail from Georgia to Maine in 2014.

Thoughts of hiking the length of the Appalachian Trail are exciting and even romantic conjuring visions of the American ideal of rugged individualism. It’s a unique way to explore 14 states to connect with nature and to see breathtaking sights but it’s an extremely challenging quest fraught with difficulty. Stats from the Appalachian Trail Conservancy show only one in every four hikers that attempts the full trail successfully completes the journey.

Time is one constraint. It takes an average of six months to traverse the entire A.T. as it’s known. The real trials though are mental and physical. Trekkers persevere through all kinds of weather deal with aches and pains battle loneliness if they go solo and wake up every morning to face yet another day of hiking another day away from the comforts of home and another day of fueling their bodies with something other than a home-cooked meal.

Hunter struggled with obtaining enough nutrients throughout his six-month trek.

“The greatest challenge was not eating enough food and not having fresh food. I was always eating oatmeal freeze-dried soup and lots of pasta ” he says. “Being hungry all the time really took a toll on me mentally and physically.”

Hunter also missed being clean. He only showered when he stayed in hotels or hostels in the small towns he passed though.

“About once a week I took a shower ” he says. “Sometimes I split a hotel room with other hikers I met along the way.”

One of Hunter’s fondest memories of the hike was the day he turned 21. As he realized he was about to spend his birthday alone for the first time he came across an RV campsite. After striking up a friendly conversation with a group of campers he told them it was his birthday.

“We’re going to have a party!” they said. They spent the afternoon grilling food and swapped stories until late in the evening.

“I was amazed that these people who didn’t even know me were so welcoming ” Hunter says.

Aside from the occasional backpacker and the section his brother Jamie joined him on he explored most of the trail by himself. He used music as entertainment and encouragement to persevere when he was hungry and tired.

“I listened to a lot of bluegrass and mountain music ” he says. “I sang to myself a lot and I had a Native American flute I played along the way.”

The Raleigh native pushed on to become one of only 835 people to earn the 2 000-miler distinction in 2014. At the end of the six-month journey he had more than the pride of a great accomplishment and memories of incredible scenic landscapes and the people he met. He also had a fresh appreciation of American roots music and Appalachian bluegrass.

Hunter began to compose songs with his acoustic guitar and mandolin when he returned home. At the same time Jamie was writing songs on the piano and guitar. The two combined their talents.

“One of our songs ‘Brother ‘ is about me hiking the Appalachian Trail and Jamie missing me ” Hunter says.

Much like the Appalachian Trail did for his brother Jamie’s travels influenced his music too. As an undergraduate studying psychology at the University of North Carolina Wilmington Jamie participated in a six-month study abroad program in South Africa. He learned about African rhythms and melodies but found himself drawn to down-home sounds.

“Over there I got into bluegrass ” he says. “I was writing songs and I started missing the South all of a sudden. I started writing more country-sounding songs.”

The brothers named themselves Brothers Egg and started booking gigs with Suzanna Crist after meeting the fiddler during an open mic night in a Wilmington coffee shop.

“We’re interested in similar bands — Mumford & Sons The Avett Brothers ” Hunter says. “After meeting Suzanna we decided to practice every day and take it seriously.”

In April 2015 Brothers Egg released its first album “Bleeding Slow.” Shortly after the CD came out Jamie quit his day job as a waiter to pursue a full-time music career with the band. The trio often plays in coastal North Carolina towns including Beaufort Morehead City and Wilmington.

“We’re trying to set up a tour for the fall to get across the country and up the East Coast ” Jamie says.

The band is also working on another album to be recorded at Hourglass Studios in Wilmington.

“We don’t have the date yet but I’d say it will be out within the next six months ” Jamie says.

Making it in the competitive music industry will be challenging. But with a 2 000-mile hike under Hunter’s belt it’s just another adventure.

North Carolina is one of 14 states touched by the A.T. Hikers traverse 95.5 miles of the trail near the Georgia border and the southern boundary of Great Smokey Mountains national park in addition to a nearly 300-mile section in the High Country of western North Carolina that frequently crosses over the state line into Tennessee. Highlights include the Roan Highlands famous for an expanse of rhododendrons in mid to late June. Many sections this time of the year will offer views of spectacular fall foliage.