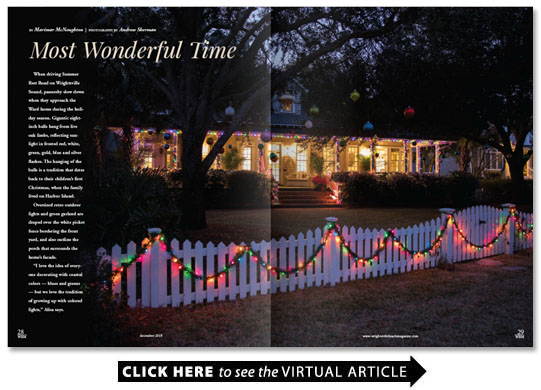 When driving Summer Rest Road on Wrightsville Sound passersby slow down when they approach the Ward home during the holiday season. Gigantic eight-inch balls hang from live oak limbs reflecting sunlight in frosted red white green gold blue and silver flashes. The hanging of the balls is a tradition that dates back to their children’s first Christmas when the family lived on Harbor Island.

Oversized retro outdoor lights and green garland are draped over the white picket fence bordering the front yard and also outline the porch that surrounds the home’s facade.

“I love the idea of everyone decorating with coastal colors — blues and greens — but we love the tradition of growing up with colored lights ” Alisa says.

The first weekend in December is the traditional beginning of the Christmas season for the family. The Ward children Bennett 10 and Lily 7 choose a cut evergreen from a local tree lot. On the day it is brought indoors and placed in the corner of the great room beside one of two fireplaces Alisa warms some hot chocolate — regardless of the temperature outside — and the ritual of unwrapping ornaments begins. Each child has a bin filled with ornaments and decorations — some made when they were in preschool others accumulated over time and still more from the family’s treasure trove acquired during travels near and far. All have meaning — a memento from the Cape May-Lewes Ferry representing Alisa’s New Jersey roots or a family trip to LEGOLAND in California. Each one is carefully unwrapped and the memories revisited.

“It’s just as much fun for me each year to watch them unwrap the ornaments ” Alisa says. “It’s all about the magic for them.”

Hand-knit by Alisa Ward’s nan is stored each year with the handwritten note her grandmother wrote for Bennett’s and Lily’s first Christmases.

Each year Alisa fondly rereads the card before hanging the stockings from the mantel beneath “Resolute ” sculptor Paul Hill’s copper steel and fused glass cow skull.

In the dining room a one-of-a-kind Santa from the Horchow Collection wearing a seashell wreath around a mane of white hair was given to Alisa by her sister-in-law. The figure carries a Scotch bonnet in its hand.

Chris Ward’s collection of vintage Santa Claus figurines were assembled from found antique items. All are accompanied by a tag penned by the Pennsylvania crafter who made them.

Alisa Ward decorates her home with childlike whimsy from the stuffed animated animal and object toys to the colored felt chains hung from the kitchen chandelier.

Alisa who makes jewelry fashioned wreaths for each child’s bedroom door. Beginning with a basic faux evergreen round she designed the wreaths with tiny shiny balls and layered in a few of their favorite childhood things. For Bennett that means Captain America dinosaurs and trains; for Lily Minnie Mouse Hello Kitty and princesses.