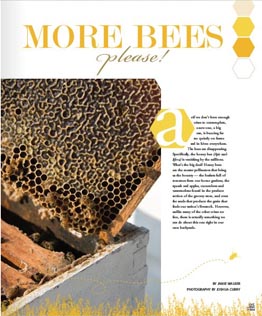 As if we dont have enough crises to contemplate a new one a big one is buzzing far too quietly on farms and in hives everywhere. The bees are disappearing. Specifically the honey bee (Apis mellifera) is vanishing by the millions. Whats the big deal? Honey bees are the master pollinators that bring us the bounty the baskets full of tomatoes from our home gardens the squash and apples cucumbers and watermelons found in the produce section of the grocery store and even the seeds that produce the grain that feeds our nations livestock. However unlike many of the other crises we face there is actually something we can do about this one right in our own backyards.

The non-native European honey bee has been rapidly declining since 2006. During the winters of 2008 and 2009 the population dropped by one third. A clear-cut solution eludes us because generally there is no clear-cut cause. CCD or colony collapse disorder named in 2007 is essentially a disappearing act on the part of the European honey bee. One day theyre busy as bees were made to be gathered in numbers upwards of 40 000 and the next day the hive is hauntingly quiet dappled with 40-100 dazed drone bees. Aside from cases of parasitic mite or small hive beetle infestation there is rarely evidence of disease destruction or any other cause of abandonment. Its a mystery.

“Theyre just gone ” says former beekeeper Herman Smith who kept bees for nearly ten years. Like many beekeepers Smith started his hives as a hobby. He was very successful within the first few years and eventually grew his hobby into a business “Herms Honey ” renting out his 10 or more hives to farms in Brunswick and Pender Counties producing more than 600 pounds of honey the year before he went out of production. In late 2006 Smith got the chilling surprise of his young career: While taking his traditional early morning tour of his five hives he discovered all them eerily empty. “There were maybe 40 bees crawling or buzzing around aimlessly ” Smith says. “There were no dead bees lying in or around the hives no sign of mites or disease. The bees were just gone.” Hes not alone. The numbers and frequency of this occurring are startling.

The possible answers for CCD range from the overuse of pesticides to unfavorable commercial beekeeping practices parasitic mite infestations and a recently discovered Israeli acute paralysis virus that has been detected in many hives. The most popular theory is that CCD is a result of the genetic and physical pressures created by some combination of all of these. The bottom line is this: The pressure is on. Non-native honey bees are far and away the most efficient pollinators going about their important business in groups of thousands. Of the 4 000 species of native bees in the U.S. none can boast these numbers.

How we can help

Seeing buzzing honey bees bumbling carpenter bees and wily wasps should now more than ever be cause to celebrate. But the nasty stingers the allergic reactions and the annoying habit of carpenter bees boring into homes and rafters are realities that make pest control experts out of too many of us.

Therein lies the first step to ensuring a fruitful future: Let the bees be.

The big-bodied carpenter bee can in some cases do the work of 40 honey bees. But they are better known for taking up residence in the structural beams of homes eventually weakening the support system by boring holes. Instead of eliminating them try to approach damage control in a more harmonious way. Build or buy a pre-made habitat for them and hang it from a tree near their existing domicile. There are several websites that offer such boxes for sale and others that offer designs for at-home construction. Its unlikely that the bees will vacate your house permanently but it will give them an attractive alternative and could drastically reduce the possibility of structural damage.

As for the stingers attract bees to far corners of your garden with some of their favorite dishes bee balm alliums mountain mint swamp sunflower white and red clover and any other thing that flowers. Remember honey bees are rarely aggressive unless defending their hive. If you encounter a feral hive on your property or in your neighborhood that is seen by you or others as a threat call your local extension agent to get in touch with a bee specialist willing to capture and relocate the hive.

Which leads us to the second step

Viewed from the picnic table under a giant magnolia at Shelton Herb Farm there is a notable mist of insect activity swarming above certain sections of the farm. A couple of honey bees visit the naturally occurring white clover that surrounds one of the herb tables. The carpenter bees bumble back and forth from the potting shed to the nursery.

Meg Shelton owner and operator says that while native plants should be encouraged for the sake of native pollinators and the honey bee alike your herb garden can also make quite a meal for little Apis mellifera and other possible pollinators. “Plant some basil that you dont want to pick ” Shelton says “and let it go to flower. They love it.” Among the other herbs that they love are thyme rosemary cilantro chives and all allium. “And mint ” Shelton adds “specifically mountain mint which has tall prolific blooms that are a silver gray color. They cant get enough of it.” Bee balm (Monarda didyma) is as its name suggests another bee favorite. “If the common name has the word bee in it then plant it!” Shelton says.

“Diversity is key ” says Neal Taylor perma-culture designer and community planner. “The more you have blooming at various times of the year the better off the bees will be. The honey bee is the generalist of the game. Theyll visit just about anything that blooms.” Larger species of bees wasps butterflies and hummingbirds are pickier and more dependent on the morphology of the flower.

Blueberry bushes are an all-time favorite of the European honey bee Taylor says. They also have a weakness for the non-invasive ground-covering clover. Taylor uses both crimson and white clover as a groundcover in his front yard vegetable garden (in mid-town Wilmington) that has proven to be “all the buzz” with his backyard bees. Blueberry bushes are grouped in corners adjacent to his garden. The two hives that he works sparingly are overflowing with busy honey bees. His garden is alive front and back with flowering plants vegetables and soon-to-flower trees and shrubs.

The third and possibly foremost step?

Stay away from pesticides

Popular products such as Sevin (Carbaryl) Malathion (used by local landscape companies) and even the so-called “innocuous” chemical Permethrin one of the many chemicals sprayed seasonally (by county-owned trucks) to control the mosquito population a program known as “adulticiding ” are highly toxic to bees and other pollinating insects. Find out about your countys adulticiding program; get the facts from your garden maintenance company about the chemicals and synthetic fertilizers they apply in your garden; inform yourself and others about alternative options to chemical use.

The intricate honey bee machine has been severely shaken and beekeepers and farmers everywhere are scrambling to find solutions. Numerous books essays and articles have been written highlighting the honey bee problem. According to Taylor its time we take a hands-off approach learn to leave Apis mellifera alone for a while. “At this point we need to shift our focus a little Taylor says. “We need to learn how to better encourage and promote the native pollinators that are sustaining themselves. Each of us as members of this fragile ecosystem can be part of the solution.”