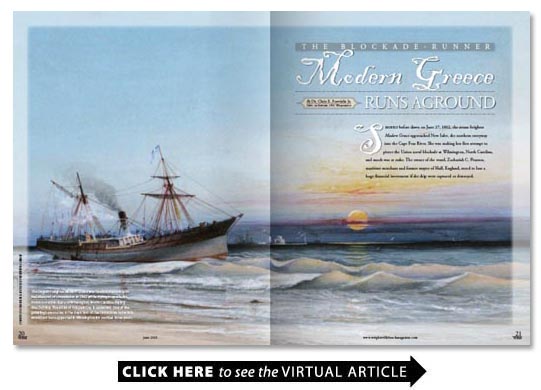 Shortly before dawn on June 27 1862 the steam freighter Modern Greece approached New Inlet the northern entryway into the Cape Fear River. She was making her first attempt to pierce the Union naval blockade at Wilmington North Carolina and much was at stake. The owner of the vessel Zachariah C. Pearson maritime merchant and former mayor of Hull England stood to lose a huge financial investment if the ship were captured or destroyed.

The Modern Greece was a large iron cargo steamship built by Richardson Duck & Company in Thornaby (Stockton-on-Tees) England in 1859. She measured 210 feet long 29 feet wide and 753 gross registered tons. The ship was driven by a propeller screw but was also schooner-rigged to maximize her speed. Registered as the Modern Greece upon her completion she was initially owned by Stephanos Theodoros Xenos of the Greek & Oriental Steam Navigation Company of London England.

In 1862 Z.C. Pearson & Company also of London purchased the Modern Greece to smuggle supplies to the Confederate States of America. Zachariah Pearson believed that the potential for enormous profits was well worth the risks of getting caught by the US Navy blockading vessels along the Souths coastline. But the Modern Greeces 10- to 12-foot draft the depth from waterline to keel made her only marginally suited for the blockade-running trade which required a lighter draft to navigate the shallow approaches to most Southern seaports. Nevertheless she embarked from Falmouth England bound for Wilmington North Carolina in early 1862. The ships cargo hold was packed with military arms ammunition and artillery as well as hardware cutlery and other civilian products the sale of which Pearson hoped would turn a good profit for his company. But first the Modern Greece had to reach the safety of Wilmingtons docks.

The whereabouts of the Modern Greece from the time she sailed until her appearance off Wilmington in late June 1862 are unknown. The Union blockading force was vigilant in watching for blockade-runners but spotting smugglers vessels at nighttime when they preferred making the final dashes into the harbors was challenging. As it turned out the Modern Greece was camouflaged with a coating of slate gray paint on her hull making the Federals task even more difficult. Up against the backdrop of a sandy beach she would be hard to distinguish from seaward.

A haze blanketed the ocean in the pre-dawn darkness along the Cape Fear coast on June 27 1862. The USS Stars and Stripes was at her blockading station near New Inlet when the lookout spied a large steam propeller schooner-rigged vessel close inshore about three miles north of Fort Fisher the inlets main guardian and heading southward. A few minutes later about 4:15 a.m. the USS Cambridge also discovered her.

Enemy in sight the signal officer on the Cambridge alerted the Stars and Stripes. The Cambridge fired a warning shot at the unidentified vessel as both gunboats moved immediately to intercept her before she crossed the bar.

When the captain of the Modern Greece realized he was being stalked he hoisted the Union Jack to indicate his neutrality as a British citizen while at the same time pressing full steam ahead toward New Inlet. The chase ended abruptly when his ship ran hard aground about half a mile north of Fort Fisher.

How the Modern Greece got ashore is still a matter of debate. Did she accidentally run onto a shoal or did her captain intentionally scuttle her?

Commander William A. Parker of the USS Cambridge claimed: She was necessarily beached in consequence of our continually firing upon her. On the other hand Confederate General Samuel G. French commander of the District of the Cape Fear informed the War Department in Richmond: We have sunk her. Another Confederate officer claimed: Her draft being too great to enter the commander of the fort fearing capture sunk her outside the bar.

Perhaps the pilot of the Modern Greece was forced to try and enter New Inlet before the tide was right. The ships deep draft would allow her to cross the shallow bar only at high tide. If that were the case then maybe the unidentified captain intentionally ran her aground with the idea of rescuing as much of the cargo as possible. Or perhaps the ships pilot was simply not familiar with the approaches to New Inlet and inadvertently ran her onto a shoal known as the lump.

Whatever the case the commanders of the Cambridge and Stars and Stripes planned to either capture or destroy the Modern Greece. They pulled up close to the stranded vessel and opened a heavy cannon fire on her. As soon as the projectiles began flying toward them the captain and crew of the Modern Greece abandoned ship and headed for the beach in lifeboats. They reportedly all escaped to safety.

Soon after the Union gunboats launched their attack artillerists in Fort Fisher joined the fight.

Surprisingly the Confederates directed some of their shots at the Modern Greece.

We were unable to account for this maneuver at the time reported Commander Parker of the Cambridge but I have since learned that the officers at the fort fired at the steamer solid shot to admit water into her and thus prevent our shells from exploding the large quantity of powder in her hold and also to insure her sinking in case we should try to tow her off the beach.

The Richmond Daily Dispatch later reported fairly accurately as it turned out that she carried 100 tons of gunpowder on board.

Gunners on the Stars and Stripes and Cambridge kept up a steady fire on the Modern Greece for almost three hours before temporarily suspending the attack. Later that morning the gunboats moved in for a second round of shelling this time with the intention of destroying the stranded blockade-runner. They were making very good firing at the Modern Greece when a few well-directed shots at the Union ships from Fort Fisher forced them to haul offshore.

Confederate General French assigned salvage operations of the Modern Greece to Colonel Collett Leventhorpe whose unit the 11th Regiment North Carolina Troops was stationed at Camp Wyatt on Confederate Point only about half a mile from the shipwreck. In less than 48 hours after the Modern Greece ran aground Colonel Leventhorpe got out and landed a large quantity of arms. Some of his soldiers allegedly pilfered goods from on board champagne wine foodstuffs for personal consumption or to sell on the black market. Leventhorpe supervised the work on the Modern Greece for one week before being relieved by Colonel William Lamb the newly appointed commander of Fort Fisher.

Lamb arrived at Fort Fisher on the afternoon of July 4 1862. The man most associated with the strongest seacoast fortification in the Confederacy salvaged as much of the Modern Greeces cargo as he could before Union gunboats or the sea managed to claim her. Hundreds of soldiers mostly garrison troops from Fort Fisher and nearby Camp Wyatt performed the work and sometimes under dangerous conditions. The Cambridge and Stars and Stripes now assisted by the USS Monticello occasionally lobbed shells toward the blockade-runner in an effort to disrupt the work parties.

Under the protection of Fort Fishers guns the Confederates saved about 2 000 tons of war material as well as civilian products from the Modern Greece. The war material consisted of British Enfield rifle-muskets bayonets tens of thousands of rounds of Enfield bullets Bowie knives lead and tin ingots and surgical kits. A reported 7 000 stands of rifle-muskets alone were brought safely ashore. The most useful items to come off the shipwreck were four of the finest pieces of artillery manufactured in the world at the time.

Shortly after taking command of Fort Fisher I recovered from the wreck of the British Steamship Modern Greece four 12-pounder Whitworth rifle guns Colonel Lamb recalled. They were the longest range guns then constructed. Cases of 12-pounder Whitworth projectiles were also salvaged. Lamb put at least one Whitworth gun to work right away. Mounting it on a field carriage he targeted the Union gunboats to keep them at bay. With these guns we made the US Blockading Fleet remove their anchorage from two and a half miles to five miles from the fort Lamb claimed.

Consumer goods pulled off of the Modern Greece amply stocked dry goods stores in Wilmington only days after the ship went aground. Other items were sold at public auction. Within a few days Wilkes Morris held the first auction of goods salvaged from the wreck. The wide variety of goods included hardware boots and shoes blankets shirts felt hats drugs and medicines cognac brandy champagne wine and Scotch whiskey.

The sea not the US Navy eventually destroyed the Modern Greece. Commander Parker of the USS Cambridge reported on August 4 1862 that the ship was already a total wreck. She rests to this day in her watery grave half a mile northeast of Fort Fisher in approximately 20 feet of water about 300 yards offshore.

The Modern Greece was only the third blockade-running steamship to attempt to run the Union blockade of Wilmington and the first one lost. But that was only the beginning of steam blockade running there. By the following summer Wilmington was the Confederacys most important seaport in receiving foreign supplies through the blockade and by late 1864 was its most important city.

General Robert E. Lee stated: If Wilmington falls I cannot maintain my army. Thus Wilmington became known as the lifeline of the Confederacy.

A severe spring storm in March 1962 uncovered the wreck of the Modern Greece. Two local scuba divers Andrew Punkie Kure and Andy Canoutus who knew the location of the derelict informed a group of divers from the Naval Ordnance School in Maryland on vacation in the Wilmington area. The Navy divers discovered that the storm had cleared away much of the sand from the ships cargo hold and that artifacts were both plentiful and intact.

Over the following two years the US Navy and the North Carolina Division of Archives and History worked together to survey and excavate the Modern Greece. In the process they salvaged more than 11 000 artifacts which led to the creation of one of the nations first underwater archaeology and marine artifact conservation programs based at the Fort Fisher State Historic Site. In January 2013 North Carolina erected a highway historical marker on Fort Fisher Boulevard in Kure Beach to commemorate the wreck of the Modern Greece and blockade running during the Civil War.

This story is an excerpt from Chris Fonvielles forthcoming book Faces of Fort Fisher 1861-1864.