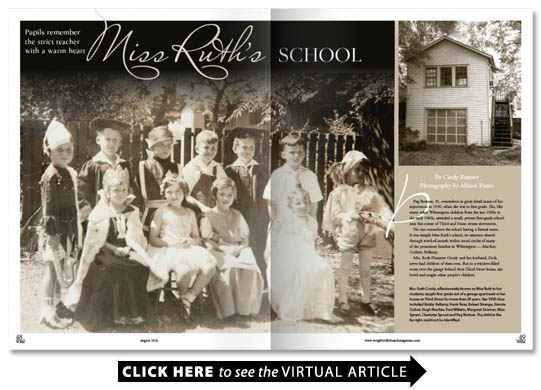 Peg Rorison 91 remembers in great detail many of her experiences in 1930 when she was in first grade. She like many other Wilmington children from the late 1920s to the early 1960s attended a small private first-grade school near the corner of Third and Nunn streets downtown.

No one remembers the school having a formal name. It was simply Miss Ruth’s school its existence shared through word-of-mouth within social circles of many of the prominent families in Wilmington — MacRae Corbett Bellamy.

Mrs. Ruth Pleasants Cronly and her husband Dick never had children of their own. But in a window-filled room over the garage behind their Third Street home she loved and taught other people’s children.

Over about three hours each morning she helped students learn the basics of reading writing and arithmetic plus social graces through play.

“At recess we played for a while and concluded with polite games ” Rorison says “with the girls curtseying and the boys becoming young gentlemen — learning to bow politely in greeting.”

John H. Debnam of Wrightsville Beach who attended Miss Ruth’s school during the 1936-’37 school year remembers that Miss Ruth would decide at the end of the year whether a student would move on to second grade in public school the next year or enter public school as a first grader. The school system accepted her recommendations.

“I was so proud to be sent to second grade ” Debnam recalls. An October birthday prevented him from entering public first grade with the rest of his friends so his parents sent him to Miss Ruth’s school to keep him at the same grade level with his friends throughout the rest of school.

Rorison and Debnam both remember Miss Ruth’s star system for encouraging students to behave. At the end of each day Miss Ruth would lick and stick a star to each child’s forehead: red if they were bad and gold if they were good.

“My mother and Miss Ruth were friends ” Rorison says. “So I needed to go home with a gold star.”

Debnam says avoiding a red star was his chief aim.

“I remember running down the alley to meet my grandfather and being so proud of my gold star ” Debnam says. “We got stars every day and I never got a red star.”

Rorison and Debnam both remember Miss Ruth being very fond of cats but Rorison remembers even more.

“During the day Miss Ruth would walk around the classroom checking our work with her cat on her arm ” Rorison recalls. “She would stroke the cat fondly which somehow would put us all at ease.”

“My grandmother’s chauffeur would drive us to school together ” Rorison says. “Hugh’s mother would pick us up after school. We would go by the drugstore and get a cherry smash.”

MacRae doesn’t remember the trips to the drugstore but he and Rorison both recall their first hardback book.

“We began reading such tales as ?Chicken Little ‘” Rorison says. “As we succeeded through the first months we progressed to our first hardback book. Its binding was pale blue and we felt tremendously proud as we picked it up and began reading.”

That book about a dog was titled “Run Dan Run.”

“Just saying it makes me sit up straighter ” Rorison says.

“We all remember that ” MacRae says. “She would call on students to repeat ?Run Dan Run’ until it was fixed in their minds.”

MacRae describes Miss Ruth as a lively person who “taught in a way that was immediately receptive for children.”

Miss Ruth’s students learned how to read by sounding out the letters at a time when most schools were using the look-and-say method of teaching students to recognize whole words or sentences. Lillian Bellamy Boney sent her two daughters to Miss Ruth because she was convinced of the superiority of her method.

“That’s why we went there the way she taught reading ” says Mary Boney Denison. “It was so much better.”

Denison attended in 1962-’63 one year after her sister Emmett Boney Haywood. Miss Ruth’s school closed shortly thereafter so their younger brother had to attend public school.

“My brother went to school and learned to read by whole words which my mother thought was the worst way to learn how to read ” Denison says.

“Mrs. Cronly was a delightful lady who marched to the beat of her own drum ” Chadwick says.

Chadwick remembers with just a little guilt the day she helped her daughter pick out a word for a game that Miss Ruth called the Catch Club. Each student was asked to bring a word to school that the other students couldn’t spell.

“I gave Gibbs the word pneumonia ” Chadwick says. “Of course the other children didn’t know it started with a p.”

Students and parents agree that Miss Ruth built the solid foundation that students needed to be successful as they moved on to public school most attending Forest Hills Elementary.

“We loved it ” Denison says. “When I went to second grade in public school it was boring.”

Whether student or parent each recalls that Miss Ruth taught children to read by teaching sounds.

“She taught phonics before it was even a term ” wrote Cae Emerson in a 2007 memory piece in the Wilmington Star News. Emerson was Miss Ruth’s student in 1955.

Emerson described an ongoing assignment for learning the alphabet. Each day the children cut uppercase and lowercase letters out of the newspaper at home starting with A then progressing with a new letter each day. The students would then tape the letters and a word starting with the assigned letter to ruled notebook paper.

“I’ve wondered if this assignment over 50 years ago started my love of newspapers ” Emerson wrote. For 30 years she worked in retail advertising sales for the Star News — cutting out letters and pieces of art then sticking them to paper to create ads.

Basic arithmetic was also an important part of their lessons and Miss Ruth created her own method of teaching.

“I clearly recall the time we progressed to addition in math ” Rorison says. “Miss Ruth had printed numbers and charts on linoleum.”

Memories of other parts of their days are not so clear but prayers and songs were probably part of the routine Rorison says.

MacRae agrees that remembering details about first grade can sometimes be difficult.

“When you get to be my age ” MacRae explains “there are so many memories in your life you have to go back and create them in your mind.”

At the end of each year Miss Ruth would invite the pupils into her home for a graduation ceremony and refreshments. The children left her with a solid foundation of education and social graces. Many attended prestigious colleges and built illustrious careers.

“I remember Miss Ruth very fondly ” Debnam says. “She was a true Southern lady with a warm way about her. She was strict but gracious and kind.”

That little room over the garage holds a host of memories — if only it could speak.