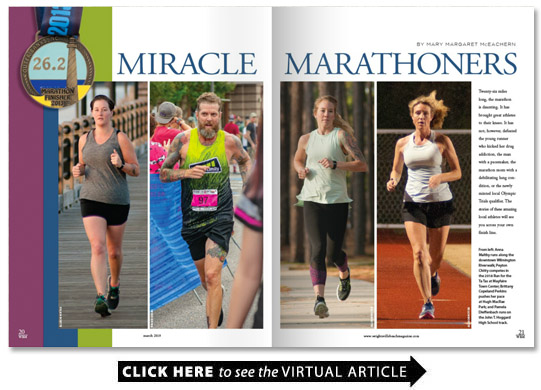 Twenty-six miles long the marathon is daunting. It has brought great athletes to their knees. It has not however defeated the young runner who kicked her drug addiction the man with a pacemaker the marathon mom with a debilitating lung condition or the newly minted local Olympic Trials qualifier. The stories of these amazing local athletes will see you across your own finish line.

Anna Maltby was never an athlete. A recovering drug addict the 30-year-old once compared the notion of running a marathon to “visiting Mars or petting a dinosaur.” Her former addiction once destructive now drives her.

“I honestly don’t think I would still be clean if I hadn’t found something that fuels my soul like running does ” Maltby says.

Pamela Dieffenbauch runs marathons despite bronchiectasis a rare lung disease that impairs breathing but she runs to set an example for her children.

“I want them to see that they can do hard things that nothing is out of reach. I want them to understand that hard work beats talent when talent doesn’t work hard ” Dieffenbauch says.

Peyton Chitty 50 has a pacemaker to treat a congenital defect that caused his heart to beat too slowly and even stop. He refuses to allow this to slow him down. Currently ranked among the top 10 cardiac athletes in the world he has qualified for the 2019 Boston Marathon.

“Feeling sorry for myself is not an option ” Chitty says. “I choose to control my attitude as that is the only thing I can control. My condition is a challenge yes but I use it to inspire others not to allow themselves to be overcome by limitations.”

These runners are motivated and that motivation sparks the fire of desire to train for hours a day day after day for years for a lifetime. Nothing compares they say to the sense of accomplishment they feel upon reaching a marathon finish line.

Marathoners are highly motivated goal-oriented overachievers by nature. Rather than discouraging them injuries and illnesses drive them to push ever harder toward their goals. Despite her chronic lung condition Dieffenbauch 44 will run the Tokyo Marathon in March. In her bid to qualify for Boston she must complete a marathon in less than 3 hours and 50 minutes — a pace of 8 minutes 45 seconds per mile. Boston a bucket-list race for many marathoners has taken on close to a holy significance since being bombed by terrorists in 2013.

Shortly after Maltby began running for her health her boss upped the ante surprising her with an entry into the Quintiles Wrightsville Beach Half Marathon. This sent her on a journey she never thought possible.

“My previous idea of running was huffing and puffing out a mile around the neighborhood before collapsing into a heap at my doorstep ” Maltby says. “But I don’t need a lot of convincing or logic to be talked into crazy nonsense; I have an addictive personality and I love a challenge.”

After finishing her first half marathon Maltby turned her attention to the marathon completing Wrightsville Beach in 2017 and New York in 2018 where she broke her personal record by 23 minutes. Now hooked she plans to run two major international marathons and an ultramarathon in 2019.

Copeland Perkins who will compete in the Olympic Trials in early 2020 prefers to let her feet do the talking.

“With running I’ve always been nervous and skeptical to state my goals out loud ” she says. “I have a personal fear of failure and I worry about what others would think if I didn’t hit my goals. But I’ve recently found a confidence and mental toughness that have enabled me to push myself in ways I haven’t in years.”

Chitty’s bid to break 1 hour and 30 minutes at the Quintiles Wrightsville Beach Half Marathon will require he maintain a pace of 6 minutes 50 seconds per mile a feat tough even for athletes without pacemakers.

Obstacles are for Overcoming

Marathoners know how to handle obstacles and setbacks. That collapsed lung blown-out Achilles tendon torn meniscus or shattered femur might seem career-ending but somehow with time and determination even devastating injuries and illnesses can be overcome.

Sometimes the race itself becomes the obstacle as was the case with Maltby’s first marathon.

“I was not mentally prepared for the long miles and I gave that marathon a half-hearted attempt ” she says. “Between injury and burnout my longest training run was 14 miles and it showed on race day.The first half of the race felt great and I thought ‘This marathon business is no big deal.’ Then I hit the wall. My body and spirit broken I was sobbing with 9 miles to go.It was hot and I was miserable. I just wanted it to be over.”

Despite the disappointment Maltby finished that marathon and proved to herself that she could perform in less-than-ideal circumstances.

“When thinking of hurdles or obstacles I can’t say that I have any ” says Chitty. “After beating heart disease everything else is cake. Balancing family work coaching and training is my greatest challenge but I just get up earlier in the day and I can get it all done.”

Self-discipline forms the heart of the marathoner. Exem?plifing this trait Dieffenbauch has successfully managed her lung condition improving her breathing with every mile she trains.

“I’m getting faster and my hard work is paying off ” she says. Her 40-mile training weeks include 18-mile long runs hill repeats track intervals and strength sessions. Each week includes a rest day to minimize chances of injury and burnout.

Half-marathon races are popular locally. They are effective training tools for marathoners. The race environment enables athletes to push themselves over longer distances at paces otherwise hard to achieve in training and the half marathon taxes the body far less than does the marathon.

The marathon demands time and patience from runners’ families who must pull double-duty while spending hours apart from their loved ones in training. Dieffenbauch describes her husband as an angel.

“He watches the kids while I’m out there pounding the pavement ” Dieffenbauch says. “He never complains and encourages me daily. I’m pretty lucky.”

Copeland Perkins also a mother credits her husband’s patience. He is “on board with my lofty goals listens to me plan all day every day around running and puts up with me when I’m exhausted and hangry ” she says.

Dietary recommendations have evolved significantly over the years. From the 1970s through the early 2000s coaches and nutritionists preached carbs carbs carbs. Recent trends have made an about-face demanding avoidance of sugars and other refined carbs like pasta and white bread focusing now on high-quality clean whole foods with regimens designed to maximize the body’s ability to utilize fat for energy.

Knowing she needed guidance before attacking her first half marathon Maltby joined a local training group and coaching service.

“I don’t know how people run without a group and coaching program ” she says.

Running alongside others with compatible fitness and speed inspires athletes to train hard enough while protecting them from training too hard. Maltby has seen a marked improvement since she began running with faster more experienced intermediate- and advanced-level athletes.

“I was so scared that the people were going to make fun of me for being slow and it was the complete opposite ” she says. “They are constantly supporting me and pushing me to be my best in both running and life.” Running with like-minded others keeps things interesting uplifting and fulfilling.

“Anna Banana — what I call her — is amazing ” says Maltby’s coach Kristen Jeno a Level 1 U.S.A. Track and Field Coach with Without Limits. “Her dedication makes me smile.Athletes like her are why I love to coach.She trusted me with her health and performance and I couldn’t be more thankful.”

Maltby credits her friends for helping her finish her first marathon.

“Thank God for friends because I would have never made it across that first marathon finish line without them ” she says. “That’s the great thing about running; it’s an individual sport but I could never succeed at it without the support of other runners. I have met the most amazing people through running and many have become the most incredible friends.”

Dieffenbauch likewise cherishes her running friends. She says running with friends can transform an otherwise tedious exhausting long run into a wonderful experience.

“We make one another laugh the whole way ” she says.

Shortly after his brush with death Chitty discovered the Cardiac Athletes a global online community of heart patient athletic competitors.

“They are a godsend an amazing source of information and support ” he says.

Bolstered by his cardiologist the Cardiac Athletes and his local training group Chitty has set and met ambitious goals including finishing a marathon within a year of receiving his pacemaker.

“I refuse to be what we Cardiac Athletes call a ‘cardiac cripple ‘” he says.

“I thought my first 5K would kill me ” Maltby says. “But I loved it and from that day on running became a major part of my life teaching me perseverance determination and commitment. It has given me confidence and shown me that I am capable of far more than I ever previously believed.”

Chitty says there is nothing he takes for granted anymore.

“Having been so close to it I’m no longer scared of death but it’s made me want to squeeze the juice out of every day then eat the rind. I want to live life as it’s meant to be lived. Anyone can. It all comes down to attitude. Amidst life’s circumstances that’s the only thing you can truly control and if you can do that then you’ve embarked on an amazing journey.”

The marathon is a literal and figurative journey. It is not a journey for the faint of heart but it is a journey possible for anyone with the right mix of inspiration determination discipline and supportive friends and loved ones. It is a lifelong journey that can begin at any point in life and it begins with one single step.

This list of mostly local long-distance road and trail races ranges from 15K (9.3 miles) through ultramarathon (any distance longer than 26.2 miles) and includes some summer races in the North Carolina mountains as June July and August are generally too hot locally to safely allow for longer-distance events at the beach.

Current Boston Marathon qualifying standards can be found at https://www.baa.org/2019-boston-marathon-qualifier-acceptances. Runners from all over the country choose the Wrightsville Beach Marathon with its flat fast and interesting course as their Boston Qualifier race.

• Myrtle Beach Marathon and Half Marathon