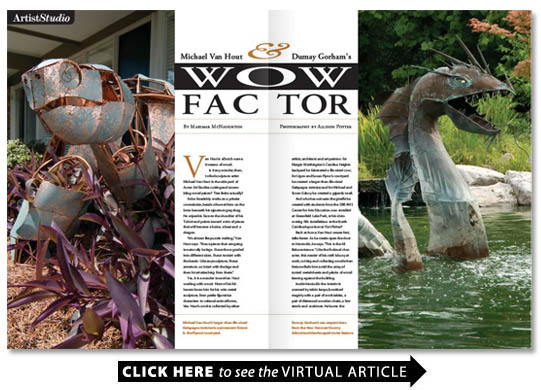 Van Hout is a Dutch name. It means of wood.

Is it any wonder then to find sculpture artist Michael Van Hout in the side yard of Acme Art Studios cutting and assembling wood pieces? Tree limbs actually?

As he feverishly works on a private commission beads of sweat form on the brow beneath his signature gray shag. He wipes his face on the shoulder of his T-shirt and points toward a trio of pieces that will become a horse a bear and a dragon.

“It’s almost like puzzle making ” Van Hout says. “I have pieces that are going to naturally be legs. I have them graded into different sizes. I have to start with the basics. Like any sculpture I have armature so I start with the legs and then I start attaching from there.”

Yes it is a wonder to see Van Hout working with wood. Most of his followers know him for his wire metal sculpture from petite figurative characters to colossal animal forms Van Hout’s work is collected by other artists architects and art patrons: for Margie Worthington’s Carolina Heights backyard he fabricated a life-sized cow; for Ligon and Susan Flynn’s courtyard he created a larger-than-life-sized Galapagos tortoise; and for Michael and Susan Glancy he created a gigantic snail.

And who has not seen the giraffe he created with students from the DREAMS Center for Arts Education now installed at Greenfield Lake Park or his shimmering fish installations at the North Carolina Aquarium at Fort Fisher?

Back at Acme Van Hout moves fast talks faster. As he creaks open the door to his studio he says “This is the Ali Baba entrance.” Like the fictional character this master of his craft is busy at work cutting and collecting wood when fortune finds him amid the array of rusted metal sheets and planks of wood leaning against the building.

Inside his studio the interior is warmed by table lamps furnished roughly with a pair of work tables a pair of distressed wooden chairs a few stools and a cabinet. He burns the midnight oil in here when he has to meet a deadline.

work in wire metal sculpture — a loggerhead sea turtle hangs from a hook on the wall a great horned owl is perched on a wood block base a small herd of giraffes lie on their sides tucked into the exposed rafters.

Van Hout’s works possess a wow factor that may only be rivaled in the Wilmington art market by the accomplishments of his studio neighbor Dumay Gorham.

Gorham’s studio like Van Hout’s receives the steady north light. Like Van Hout’s his work bench is layered with paper drawings composite sketches of works in process and color Xerox images. Unlike Van Hout who hand builds his pieces using only a drill press for punching holes lashing metal plates to wire with wire Gorham’s wall is lined with tools — crimpers pliers shears cutters hammers wrenches and steel brushes. In the corner is his welder.

In the darker recesses of his studio is copper sheeting and rolled metal tubing that will one day become a Dram Tree. When finished and installed at the Wilmington Convention Center the sculpture will not only represent a lasting symbol of seafaring captains and their toasts to safe journeys but a lasting symbol of the Port City to visitors. New Hanover County Arboretum visitors see his larger-than-life sea serpent and University of North Carolina Wilmington visitors see his sea hawk in front of Hoggard Hall.

“I’ve always been intrigued by metal work and welding ” Gorham says. “I used to work jobs in construction … in the summer time. One of them was working on a really big industrial site where I was just a laborer. But I would always watch the guys who were up on the metal framework welding. Sparks were flying everywhere; it smelled a certain way. I always thought those were the coolest guys on the job site.”

Dumay Gorham attended the Art Institute of Pittsburgh where he studied industrial design technology after he earned a Bachelor of Arts in English from North Carolina State University. Back in Wilmington he met Karen Crouch. Before she moved to Acme she rented studio space from Mark Offerman of Mark Made where Gorham had picked up a gig assisting the exhibit creator. During that time he says he would wander into Crouch’s studio.

“Karen and I would talk and I picked her brain about a few things and she was nice enough to let me play around ” Gorham says. “The first couple of pieces I made with her welder. Then I got mine for Christmas ” he remembers.

But becoming an artist is not something he set out to do. He says he wishes now he had earned a teaching degree. His grandfather was a teacher and at Little Chapel on the Boardwalk in Wrightsville Beach there is a Sunday school classroom named for him Alonzo Dumay Gorham Sr.

“I’m the third and there is now a fourth ” Gorham says. “He used to teach mechanical drawing and drafting at Hanover High School and UNCW when it was still Wilmington College.”

Some of the skill in planning and organization of projects Gorham says he inherited from his grandfather. “Not necessarily the really tight mechanical drawings and drafting skills that somebody would apply in an architectural field ” he says “but later in life when I went to design school was where I really tapped into some things along those lines that previously I hadn’t tried or really been exposed to. I guess there’s a thread in there.”

As he talks a cardinal sings in the shrubbery outdoors as Van Hout swings his hammer tapping out a staccato rhythm.

“The artists here for whatever reason gravitate toward one another over a period of time ” Gorham says. For 12 years he has been Van Hout’s neighbor.

Michael Van Hout’s grandfather was a World War I draft dodger who arrived in Minnesota in 1914. Van Hout’s father became a West Point graduate an accolade he wanted for his son.

“I had good grades but I wasn’t very athletic ” Van Hout says. “He really pushed me that way. This was way before I was an artist and I didn’t know what was wrong with me. I had no desire to compete. He was military. I think that’s really typical. It’s a real strong brainwashing kind of career. It gave me something really strong to react against.”

He dropped out of North Carolina State University in the 1970s and was working on the grounds crew when he began pocketing baler wire used to secure the pine straw. At the end of the work day he twisted the wire into a series of figures blues musicians and Bob Dylans were favorite subjects. He went back to college at the University of North Carolina Greensboro to pursue a degree in sculpture.

“For me the sculpture is about volumes I love the volume of the head to the body. With these wire sculptures I’m trying to really capture the essence of an animal. People read that people can see it I think. That’s one of the joys of the work.”

His approach was very logical based on a right angle formula he says. When he became disenchanted with a body of work he produced for a show in Greensboro he threw the work away when it didn’t sell.

“My tendency is toward order. My work — especially with the wire — I got to this point where the pieces became predictable.”

When the Recession hit the Wilmington art community the bottom fell out of Van Hout’s large-scale commissions — which had been lined up a year in advance. He returned to sculpting smaller pieces and printmaking. His daily mantra he says was “try new work try new work.”

Since that time he has been inspired by another of Acme Art’s resident artists Michelle Connolly and his work with his students at the DREAMS Center for Arts Education.

“It’s this kind of childlike approach to work ” he says. “I don’t want to do her work but I want to apply the principle of being freer. What I try to do is throw myself off of this predictable approach. When I teach my kids I try to tell them to find a different approach. Don’t get sucked into the easiest route. The main thing is to be loose and gestural and spontaneous.”