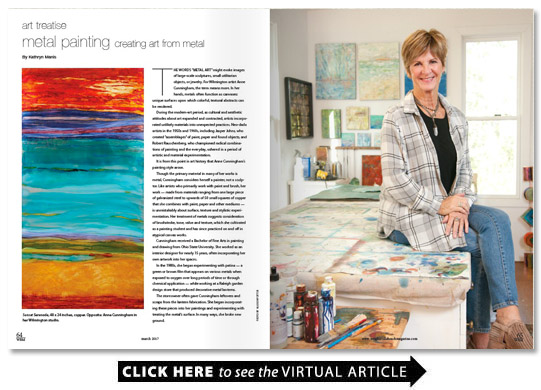 The words “metal art” might evoke images of large-scale sculptures small utilitarian objects or jewelry. For Wilmington artist Anne Cunningham the term means more. In her hands metals often function as canvases: unique surfaces upon which colorful textural abstracts can be rendered.

During the modern-art period as cultural and aesthetic attitudes about art expanded and contracted artists incorporated unlikely materials into unexpected practices. Neo-dada artists in the 1950s and 1960s including Jasper Johns who created “assemblages” of paint paper and found objects and Robert Rauschenberg who championed radical combinations of painting and the everyday ushered in a period of artistic and material experimentation.

It is from this point in art history that Anne Cunningham’s painting style arose.

Though the primary material in many of her works is metal Cunningham considers herself a painter not a sculptor. Like artists who primarily work with paint and brush her work — made from materials ranging from one large piece of galvanized steel to upwards of 50 small squares of copper that she combines with paint paper and other mediums — is unmistakably about surface texture and stylistic experimentation. Her treatment of metals suggests consideration of brushstroke tone value and texture which she cultivated as a painting student and has since practiced on and off in atypical canvas works.

Cunningham received a Bachelor of Fine Arts in painting and drawing from Ohio State University. She worked as an interior designer for nearly 15 years often incorporating her own artwork into her spaces.

In the 1980s she began experimenting with patina — a green or brown film that appears on various metals when exposed to oxygen over long periods of time or through chemical application — while working at a Raleigh garden design store that produced decorative metal lanterns.

The storeowner often gave Cunningham leftovers and scraps from the lantern fabrication. She began incorporating these pieces into her paintings and experimenting with treating the metal’s surface. In many ways she broke new ground.

“No one was doing anything like what I was doing ” she says. “I started adding [the metal] more and more to my paintings and eventually it became all metal.Back then I couldn’t purchase products to make the metal turn so there was a lot of experimenting with beach water and sand truck tires and household materials. Early on the patinas I achieved were all in blues and greens but I’ve had about 25 years of experimenting. And I still have never studied anybody — nobody else is crazy enough to do this stuff.”

She points out though that there is a strong metal arts community in southeastern North Carolina with talented craftspeople employing a variety of techniques.

“There are so many metal artists in town and everyone does something different so none of us step on each other’s toes ” she says.

Cunningham is an intuitive abstract artist who allows the creative impulse to take her in the moment.

“I might start off saying ‘I’m going to do one thing ‘ and it always ends up way over here ” she explains. “And I find myself wondering ‘Where did that come from?’I don’t plan out much of anything and it keeps me inspired and excited to make work.”

While her work style and content have undergone several changes over her long career Cunningham is best known for her woven patinaed and stained metal works many of which are mounted on wooden frames built by her late husband.

Cunningham arranges and mounts the small copper squares in a grid-like structure or weaves them together in a complicated textural pattern. Then she begins the painstaking process of manipulating the surface of each individual piece. This is achieved through chemical application physical manipulation by hammering and bending and the use of other materials including paper paint dyes powders and inks.

One of these works incorporates pieces of paper taken from the watercolor works of her mother. Another titled “Ancient Remains ” features 48 copper squares the surfaces of which have been worked and reworked several times. Cunningham explains that she will often go back sometimes years later and continue the treatment of a particular piece.

In “Ancient Remains ” the surface texture recalls architectural ruins broken down through sand sun and weather. Featuring a variety of earth tones in browns oranges and greens this work evokes the passing of time and the aging processes enacted on man-made structures by nature and her elements.

Cunningham’s oeuvre is multifaceted and reveals a rebellious side of her personality that she explains has informed her life and work from an early age.

“I’m rebellious from way back; I’m a ’60s kid so I never did anything right ” she says with a good-natured smile. “Even when I was taking oil and cold wax and encaustic classes the other students were using the techniques more traditionally and I just didn’t do it that way at all. With some artists like [Jasper] Johns and [Barnett] Newman their works look incredibly exact in a book but when you get close to them they are actually very drippy and messy. They were having fun; they were getting into it. And that’s what I do.”

Her pieces can be seen in a variety of corporate settings including Duke Medical Center PPD United Health Care SAS Institute the RBC Center in Raleigh and Aetna Insurance in Boston.Popular in this context are what Cunningham has dubbed her “organics.”

These pieces feature several square and circular pieces of copper linked by straight or curved copper rods. Using industrial-strength glues to hold the individual parts together Cunningham connects several shapes in swirling patterns or straight lines. These works typically rendered in green and blue patinas with a small outline of mostly untreated copper create a sense of movement and vibrancy that immediately suggests plants flowers and signs of sprawling life.

More recently Cunningham has begun to play more explicitly with the tension between painting and metalworking. One such experiment involved the use of large sheets of galvanized steel and newly developed dyes that can be applied directly to metals.

In “Sunset Serenade ” she treats a large piece of steel in much the same way that a painter might treat a canvas. Applying bright shades of red and blue dyes Cunningham creates a dripping shining sunset over a waterscape.

She applies the dyes loosely in the highly saturated horizon allowing the colors and planes of the image to subtly run together. The final product reads much like a watercolor but the brightly pigmented dyes applied to the luminous metal surface grant the work a much more dramatic and bolder emotional quality.

Cunningham has also begun to revisit her academic training and artistic roots — beginning her pieces not with the metal but instead with canvas and paint and later incorporating metals into the texture of these nonrepresentational works.

One of these paintings titled “Mysteries of the Marsh ” features a softly rendered marsh scene that relies on muted colors and a delicate blending of paint. Small pieces of copper are applied to the painting’s surface using a medium called cold wax most commonly used with oil paints. This material allows the metal to adhere to the canvas or paint and creates a raised mounded surface. These gleaming additions grant the painting a serene almost mystical feeling and remind the viewer of a scene glimpsed in a daydream.

Cunningham describes her art process as meditative exploratory and an absolutely necessary part of life. So she is happy when viewers and collectors see life and movement in her pieces.

“People often say to me that ‘Your work is alive it changes all the time ‘ with the light of the day and because of the reflective aspect ” she says.

It’s the ability to inspire encourage and envelop viewers in a sense of growth warmth and beauty that keeps Cunningham’s rebellious spirit and creative mind energized and ready to create more works imbued with passion and energy.