It’s the most wonderful time of the year and at the Hutchens home, Christmas is on full display 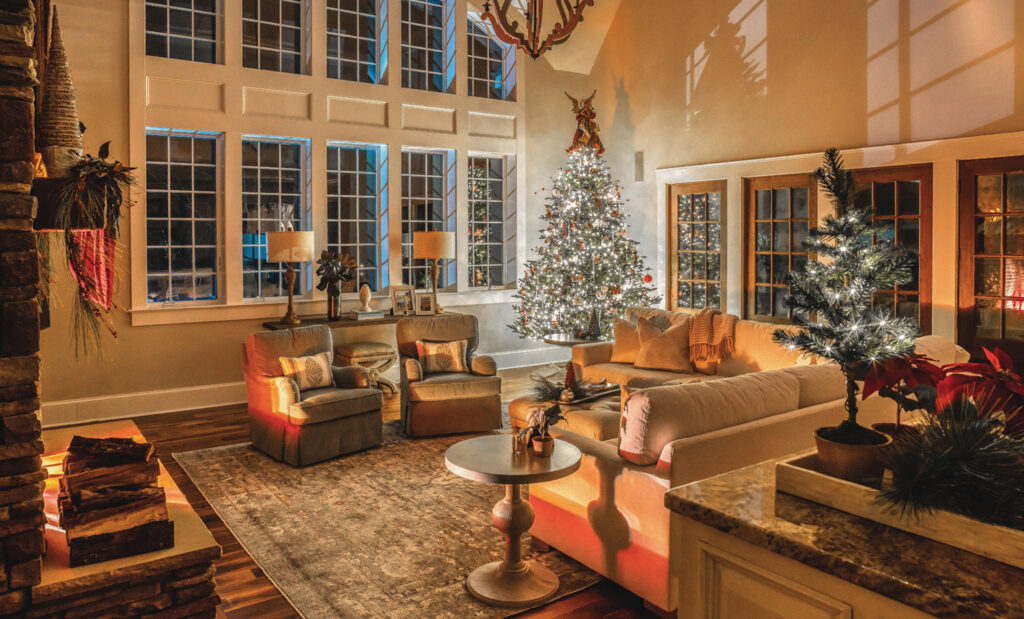 The near 20-foot ceilings of the Hutchens’ home allow for a 10-foot-tall Frontgate Christmas tree topped with an angel wearing a velvet dress that Sandy Hutchens found at a local Christmas shop. Many of the ornaments on the tree were given as keepsakes to the children each year by their grandmother. Photo by Harry Taylor

“I decorate a LOT and I decorate early,” says Sandy Hutchens.

Sandy Hutchens and husband, Chris Hutchens, moved into their custom-built three-story home overlooking Landfall’s Nicklaus golf course the Christmas of 2008 when their three children were 8, 6 and 1. Throughout the years, Sandy has often surprised the kids by decorating the house while they were at school.

Many times, I wouldn’t tell them I was going to do it. I wanted them to come home and be totally surprised. It was shock and awe and felt magical,” she says.

Today, the daughters will be coming home from college and their son is a high schooler. Stockings will still be hung on the same stone chimney with care, and the family’s 10-foot Christmas tree will still be topped with the angel Sandy found at a local Christmas shop and adorned with the same keepsake ornaments from years past.

Yet everything else about the house is all new. From top to bottom, from wall colors to light fixtures, tile and furniture, this cherished home filled with memories has been given a merry and bright French country makeover, in time for the holidays.

A Home for the Holidays

It’s a house designed to be filled with kids and friends and family during the holidays. The tall ceilings, perfect for the big Christmas tree, and the big kitchen with the big island were intentional.

The design began with a hand-drawn sketch of a floor plan by Sandy Hutchens, who envisioned lots of activity. Longtime friend and architectural designer Troy Kenny of Design House took it from there.

“The most distinguishing part of the Hutchens’ home is really the hospitality that flows from Sandy and Chris,” Kenny says. “The English manor facade appealed to her because it offered charm and character with its asymmetrical detailing, mixed cladding elements like stucco, brick, stone, cedar shake, and exposed wood members.”

“Tucked away on the third floor is a cocoon-like movie room. Dark, comfortable, like your favorite snuggly blanket,” Kenny says.

Over the three-car garage is a private guest apartment. In all, the home has six bedrooms.

“I wanted the design to be very family-oriented,” Sandy Hutchens says. “I wanted the big pantry, the big laundry room, I wanted this to be the house the kids brought their friends to hang out. I have so many pictures of 20 kids in the pool.”

Each year at Christmastime, the aroma of Sandy’s homemade cookies and pound cake fills the air. At nighttime the family gathers at the circular kitchen table for a game of Rummikub or cards.

“We all sit around that table a lot in the evenings,” Hutchens says.

The kitchen table is one of the only original pieces to remain following the 2020 remodel. The main area has nearly 20-foot ceilings allowing for a 10-foot Frontgate Christmas tree topped with a 2-foot-tall angel. Many of the ornaments were given to the children by their grandmother, Sandy’s mom, who also made the ceramic nativity on display in the breakfast nook atop the buffet.

“I love nativities, they are a reflection of what Christmas is really about,” Sandy Hutchens says. “Mom made that one and it’s my favorite because it’s just really simple.”

Over time, the rich, dark jewel tones used when the home was built needed brightening. When the ice maker broke following Hurricane Florence and buckled the floors, it became the perfect excuse for a complete remodel.

“Of all the calamities to cause problems, it was our ice maker leaking,” Sandy Hutchens says. “We had to repair all the floors and we had to move out. Moving out, that was the catalyst.”

“You live life with three kids and one day you wake up and look around and say, ‘Oh my gosh,’” laughs Hutchens. “We tried to change things out here and there over the years and I didn’t feel like anything matched or went together.”

The Hutchenses brought in friend and interior designer Hooper Patterson of Hooper Patterson Interior Design, whose projects have been featured in such publications as Architectural Digest and HGTV magazine.

“It started with, ‘Can you help me pick out a stain for the floors?’ and then it just spiraled and evolved, and I really like where we’ve landed,” Patterson says.

The goal was to lighten and brighten and soften and update. The challenge was to do it without losing any of the warm, French country, old-world feel of the home.

“That’s where we pulled in linens and textures and velvets. We used heavy fabrics and then lightened everything up,” says Patterson.

The launching pad was the kitchen. Down came the dark, burnt red and olive-green subway tile backsplash and up went a delicate patterned hand-painted tile over Carrara marble.

“We pulled the color palette for the entire space from this one tile. Switching out that one thing changed the whole feel of the kitchen,” Patterson says.

Rubbed bronze chandeliers were replaced with lantern pendants. Dark wall colors were painted over with light creams and pale blues. All heavy curtains came down.

“I wanted to showcase these windows and not add any distraction,” Patterson says.

Every light fixture was changed. Pointing up to the ceiling of the family room, Hutchens says, “This was a huge candelabra that almost started to look more like an old world dungeon.”

“Then I said, ‘Hey would you be open to some wallpaper?’” laughs Patterson.

Wallpaper brightened up a dark breakfast nook and gave new life to the powder room.

“I haven’t had wallpaper since I was a child,” Hutchens says. “Chris said, ‘Absolutely not’ and then he saw it up and did a complete 180 and said, ‘This is incredible!’”

A lighter color palette achieves an updated look. Blending old décor with new keeps hold of the home’s original character. “Adding antiques and pieces with a patina create a feeling of warmth without having to use rich, dark colors,” says Patterson.

Seasons change. When the Hutchenses first moved into their home in 2008, the side yard had a wooden swing set that was later replaced with a trampoline. Today it’s a putting green. Portraits of the children when they were little have been brought from other parts of the house and all put in Sandy’s office, a suggestion from Kenny.

“Sandy’s goal was to design and build a legacy home, one the family could enjoy as it grew and evolved over the years,” Kenny says. “She has a real talent for cooking and opening her home to everyone.”

Fresh surroundings from the makeover prepare the home for the next stages of life.

“I see grandkids here one day; it will be the house the kids will have deep roots in,” she says.