A custom-built home in Ogden hits all the right notes 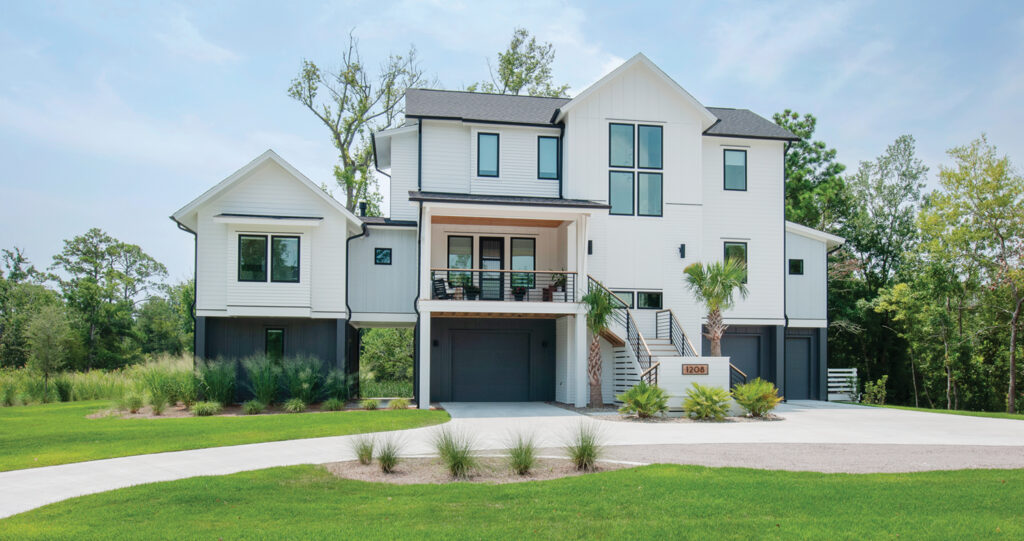 It’s a “you-had-me-at-hello” kind of home, a house that makes you want to stop and take a picture. That breezeway, those industrial accents, the front door with the chinchilla glass.

Music to the eyes just might be the perfect description. Warm and inviting, yet oh so cool.

The owners are pretty cool themselves. Beau Gunn is program director of 98.3 The Penguin, and host of the daily afternoon drive show broadcast from the “igloo.” He’s also part owner and market manager of the station’s parent company. Ann Gunn is director of operations at Nest Realty and has an eye for style. Together they own Beau Gunn Presents and produce concerts at Greenfield Lake Amphitheater.

The two met at a concert in Wilmington in 2005.

“At a Soapbox concert, it was a little music venue downtown, we definitely both share a love for live music,” says Beau.

The Gunns are a family of four. Mya is 6, Hayes is 4. The need for a bigger house and greater backyard landed them not far from where they were already living when a new area of Anchors Bend located off Middle Sound Loop Road in Ogden opened up.

“When the opportunity arose to build a custom home in our neighborhood that we already loved, we jumped at the chance. I don’t think either of us ever dreamed how cool this project would become,” says Beau.

Above all, the Gunns wanted their new home to be unique. They picked a lot covered in trees overlooking the marsh and selected modern-leaning architect designer Channing Glover of Glover Design, LLC.

“We liked him because he has this modern style, but not too over the top,” Ann says. “I wanted to do eclectic, fun and elegant at the same time. And also traditional things, being able to blend those together and create something we are going to love for years and years to come.

“She exceeded all our expectations,” says Ann.

The interior design was spearheaded by Ann and influenced by Nest Realty’s lifestyle and décor magazine with the help of Norris and designer Julia Jacobsen.

Beau, Ann, Mya and Hayes Gunn moved in just before Thanksgiving 2020 and were treated to a front-row seat into the great outdoors with surprise appearances from hawks, deer, egrets and herons.

“It’s one of my favorite things about the house. We have a pair of binoculars on each floor that the kids are constantly grabbing for,” says Ann.

Beau and Ann prioritized outdoor living in the beginning stages of design and say Glover nailed it. The quintessential Southern screened-in porch, for example, was built on the second floor and received a modern twist with the new Screen Tight clear screen, one of the first to be used in New Hanover County.

“That product allows you to eliminate the railings on porches and provide an unobstructed view to the marsh,” Glover says.

It is just one of many distinctive architectural features throughout.

“We created the dogtrot/breezeway as a way to direct guests to the rear of the home and funnel breezes through that space. Also, I blended local vernacular forms with industrial material like the corrugated metal siding,” says Glover.

“He brought in the industrial points with the metal, which we weren’t too sure of, but I’m so glad we went with it,” says Ann. “They complement the large concrete mantle and outside dining table created by Mann’s Creative Designs, which pulls the edgy and raw style we were going for.”

“Channing grew up in this area. I think this project took on a really special and personal meaning to him. He would say ‘I used to ride my bike right here around this marsh,’” says Beau.

Norris created her company to bring a boutique feel to building, with one-on-one time with clients for a true custom experience.

“I see from a different perspective, it’s not just the nuts and bolts, you have to be cohesive, you have to see the end product before you start,” she says. “Ann and I, we would have a lot of ‘what if we’ meetings.”

“It was a lot of standing around with our arms crossed, just trying to feel the space,” says Ann.

“I think we looked at every plank of wood in the state of North Carolina and went back and looked at it again. There was such a camaraderie that really made this house become beautiful inside and out,” says Beau.

Norris talked Ann into a concrete island kitchen countertop. Ann talked Norris into stucco for the family room fireplace and kitchen hood. The powder room has fun wallpaper, a sage green ceiling, and a picket tile backsplash inspired by a bathroom Ann saw in Brooklyn, New York. The kitchen cabinets and windows took some hunting, and the laundry/mud room was originally supposed to have gold light fixtures.

“They are black now because Annah painted them,” says Beau.

“I didn’t and she could see it all over my face, so she painted them for me,” Ann beams.

“We went to a lot of showrooms and never settled for the norms,” says Norris.

“She made sure we stayed on budget, the construction site was always organized and clean, and we collaborated in design and so much more,” says Ann.

In 2008, Beau organized his first concert at Greenfield Lake, a celebration of The Penguin’s fifth anniversary. Since then, Willie Nelson, Bruce Hornsby, Warren Haynes and many others have come through.

Throughout the years of being a radio host and concert producer Beau has acquired some really cool stuff.

“Ann politely [told] me that my music memorabilia was not going to be all over the house,” laughs Beau.

And so, the MoonTime Bar & Grill was born. Located on the bottom level, it has a full view glass garage door that opens to the back deck. The actual bar was built by Ann’s dad. The floor-to-ceiling mural of the moon looking back at Earth paired with metallic epoxy flooring achieves what Beau calls “a lunar themed watering hole.”

“The grill will come later,” Beau laughs. “It’s where we find ourselves entertaining a lot.”

It’s where you can find signed posters from Widespread Panic to Willie Nelson.

Ann called on Jacobsen, a friend and designer of the Nest office, for ways to fuse music into the décor of the home. Jacobsen came up with the ukulele wall.

“I really loved those ukuleles, and they have these tall walls in the staircase. I thought that would be a fun spot for them,” says Jacobsen.

To categorize the interiors with a general style label would fail to capture the personality of the Gunn home. Their décor rather pulls from several different styles to create a category all its own.

“Ann and her husband are just so eclectic and individual,” Jacobsen says. “This house is not out of a catalogue, there are so many beautiful pieces that are so meaningful to them. That’s why I love it so much.”

As do the owners.

“I would build this house a million times over,” says Beau.