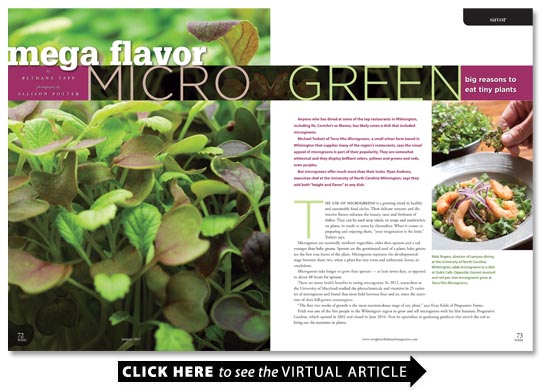 Anyone who has dined at some of the top restaurants in Wilmington including Rx Ceviche’s or Manna has likely eaten a dish that included microgreens.

Michael Torbett of Terra Vita Microgreens a small urban farm based in Wilmington that supplies many of the region’s restaurants says the visual appeal of microgreens is part of their popularity. They are somewhat whimsical and they display brilliant colors yellows and greens and reds even purples.

But microgreens offer much more than their looks. Ryan Andress executive chef at the University of North Carolina Wilmington says they add both “height and flavor” to any dish.

The use of microgreens is a growing trend in healthy and sustainable food circles. Their delicate textures and distinctive flavors enhance the beauty taste and freshness of dishes. They can be used atop salads in soups and sandwiches on plates in meals or eaten by themselves. When it comes to preparing and enjoying them “your imagination is the limit ” Torbett says.

Microgreens are essentially newborn vegetables older than sprouts and a tad younger than baby greens. Sprouts are the germinated seed of a plant; baby greens are the first true leaves of the plant. Microgreens represent the developmental stage between these two when a plant has tiny roots and embryonic leaves or cotyledons.

Microgreens take longer to grow than sprouts — at least seven days as opposed to about 48 hours for sprouts.

There are many health benefits to eating microgreens. In 2012 researchers at the University of Maryland studied the phytochemicals and vitamins in 25 varieties of microgreens and found that most held between four and six times the nutrients of their full-grown counterparts.

“The first two weeks of growth is the most nutrient-dense stage of any plant ” says Evan Folds of Progressive Farms.

Folds was one of the first people in the Wilmington region to grow and sell microgreens with his first business Progressive Gardens which opened in 2002 and closed in June 2016. Now he specializes in gardening products that enrich the soil to bring out the nutrients in plants.

Good soil increases the nutrients in the microgreens as well as the flavor notes ” he says.

Microgreens especially soil-grown ones can be up to 40 percent more nutritious than the mature versions of the same plant Torbett says. The early developmental stage helps our bodies utilize all the extra nutrients produced from vitamins and minerals to antioxidants and phytonutrients.

Matt Rogers the director of campus dining at UNCW grows microgreens in a small hydroponic garden on campus so he can quickly get them to students when the health benefits are at their peak. The hydroponic garden and microgreens are part of the university’s sustainable dining initiatives an effort to buy and grow local as well as to help students understand where their food comes from and why that is important. It also ensures optimal flavor.

“When you harvest lettuce in a field you might eat it a week later ” Rogers explains. This means the produce at grocery stores has lost much of its nutritional value before making it to the dinner table. “Here we’re cutting microgreens and serving them within minutes. It is something literally being grown right in front of you that you’re going to eat today.”

Both taste and nutrition are potent and most beneficial when the microgreens have just been harvested.

“We have the live microgreens that are still attached to the actual stem ” Andress says. “Because of their sheer freshness they taste like the most concentrated version of the herb.”

It’s also possible to grow microgreens at home with minimal cost and effort.

They are pretty easy to grow ” Andress says.

Several factors make growing microgreens simple and affordable. They are ready to harvest in one to three weeks and a lot can be grown in a small space perfect for a sunny windowsill or outdoor patio. They don’t need special seeds or treatment. They can be grown like any other plant in soil with sunlight and water.

Basil beets cilantro kale lettuce parsley peas arugula corn and spinach are just a few types of vegetables and herbs that can be grown as microgreens — really almost any vegetable or herb can be grown and eaten as a microgreen although some varieties will taste better than others.

Depending on the variety the flavor can be intense. With an herb like micro-cilantro a little goes a long way.

“It’s like cilantro on steroids ” Rogers says “dense and nutritious.”

Use it to perk up the flavor of fish tacos or spring salad. Or add bite and nutrition to a salad by replacing standard greens with microgreens.

Any microgreen can add different textures and flavors to a meal whether in a salad or on an omelet raw or sauted briefly.

“I just wouldn’t recommend cooking them for too long ” Torbett says.

Because a little goes a long way Andress suggests using them as a complementary component highlighting what is already in the dish.

“If you use cilantro in a stew you can use micro-cilantro in the dish to accentuate the flavors ” he says.

The ease of growing and accessing microgreens is a large part of the reason they have become trendy.