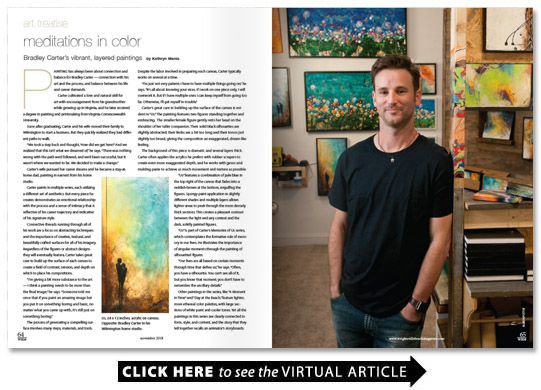 Painting has always been about connection and balance for Bradley Carter — connection with his art and the process and balance between his life and career demands.

Carter cultivated a love and natural skill for art with encouragement from his grandmother while growing up in Virginia and he later received a degree in painting and printmaking from Virginia Commonwealth University.

Soon after graduating Carter and his wife moved their family to Wilmington to start a business. But they quickly realized they had different paths to walk.

“We took a step back and thought ‘How did we get here?’ And we realized that this isn’t what we dreamed of ” he says. “There was nothing wrong with the path we’d followed and we’d been successful but it wasn’t where we wanted to be. We decided to make a change.”

Carter’s wife pursued her career dreams and he became a stay-at-home dad painting in earnest from his home studio.

Carter paints in multiple series each utilizing a different set of aesthetics. But every piece he creates demonstrates an emotional relationship with the process and a sense of intimacy that is reflective of his career trajectory and indicative of his signature style.

Connective threads running through all of his work are a focus on abstracting techniques and the importance of creative textural and beautifully crafted surfaces for all of his imagery. Regardless of the figures or abstract designs they will eventually feature Carter takes great care to build up the surface of each canvas to create a field of contrast tension and depth on which to place his compositions.

“I’m giving a bit more substance to the art — I think a painting needs to be more than the final image ” he says. “Someone told me once that if you paint an amazing image but you put it on something boring and basic no matter what you came up with it’s still just on something boring.”

The process of generating a compelling surface involves many steps materials and tools. Despite the labor involved in preparing each canvas Carter typically works on several at a time.

“I’m just not very patient; I have to have multiple things going on ” he says. “It’s all about knowing your vices. If I work on one piece only I will overwork it. But if I have multiple ones I can keep myself from going too far. Otherwise I’ll get myself in trouble.”

Carter’s great care in building up the surface of the canvas is evident in “Us.” The painting features two figures standing together and embracing. The smaller female figure gently rests her head on the shoulder of her taller companion. Their solid black silhouettes are slightly abstracted; their limbs are a bit too long and their torsos just slightly too broad giving the composition an exaggerated dream-like feeling.

The background of this piece is dramatic and several layers thick. Carter often applies the acrylics he prefers with rubber scrapers to create even more exaggerated depth and he works with gesso and molding paste to achieve as much movement and texture as possible.

“Us” features a combination of pale blue in the top right of the canvas that fades into a reddish-brown at the bottom engulfing the figures. Spongy paint application in slightly different shades and multiple layers allows lighter areas to peak through the more densely thick sections. This creates a pleasant contrast between the light and airy context and the dark solidly painted figures.

“Us” is part of Carter’s Memories of Us series which contemplates the formative role of memory in our lives. He illustrates the importance of singular moments through the painting of silhouetted figures.

“Our lives are all based on certain moments through time that define us ” he says. “Often you have a silhouette. You can’t see all of it but you know that moment; you don’t have to remember the ancillary details.”

Other paintings in the series like “A Moment in Time” and “Day at the Beach ” feature lighter more ethereal color palettes with large sections of white paint and cooler tones. Yet all the paintings in this series are clearly connected in form style and content and the story that they tell together recalls an animator’s storyboards.

In the Floral Impressions series Carter extends his skill in creating unique and dynamic surface textures. This series is best classified as mixed media and he utilizes a wide range of materials including molding paste paint glitter gold leaf resin and several different kinds of texturizing mediums.

“The flower series has been developing for many years and originated from two earlier series: my process art flowers and candy dot pieces ” he says. “Those eventually merged and became this. They are colorful bright and in your face. Life can be really hard and sometimes you need that thing that tells you that it’s going to be OK. There is also a tactile feel to them. This is because they’re coated in glass resin. They’re just meant to be fun and vibrant and to add some color and a smile to the viewer’s life.”

“Vibrancy of Separation ” an 18-by-24-inch composition on panel showcases the emotive potential of this style and Carter’s ability to imbue the works with contagious enthusiasm.

In this example he represents a field of brightly colored flowers in varying citrus shades that cut through the center of the canvas. The flowers as with all of the works in this series are nearly three-dimensional because of his creative use of materials and a painstaking layering process. The group of flowers sways in an imagined breeze perched atop dark green expressionistic stalks which sit on a field of pale green and a darker blue sky. The windy setting is reinforced by swirls of white paint and multi-colored paint drips that populate the background.

“Picked for You ” another in this series utilizes a color scheme of purples blues and greens with yellow highlights. Carter lays small sections of gold leaf among the stems. The flowers start below the horizon line and flow gently up the sides of the canvas giving even more kinetic energy to the piece. An impossibly bright and exuberant blue floods the background.

In both examples Carter’s passion for color and belief in the meditative quality of art is apparent. The cheerful color palettes and playful kinetic energy of the flowers and their setting is exciting positive and fun to look at.

He sees painting as not just a career but also a strategy for engendering a good mood and positive perspective.

“It’s therapeutic for me ” he says. “My outlook changes a little bit if I don’t get to paint. I can feel it. Art gets my endorphins going; it clears my head and I don’t think about anything else. When I’m painting my brain slows down and I can clear my head.”

These paintings along with his totally abstract works like “What Tomorrow Holds ” reveal one of Carter’s historical influences: abstract expressionism. This is visible in some of the paint application techniques he uses as well as his views on the role of the artist and value of art. He describes the experience of creating as personally and socially uplifting and thinks of the process as just as important as the product. This perspective is one he shares with famous abstract expressionists including Jackson Pollock and Willem de Kooning.

Unique in his body of work is the Animals series which features whimsical often humorous portraits of farm animals wildlife and beloved pets. While this is the only truly representational series he currently produces it connects to one of the primary appeals that art holds for Carter: its ability to inspire cheer.

“Color triggers happiness ” he says and the transmission of joy is chief among his goals.

“Come On ” for example depicts a cow in three-quarters perspective. The animal’s head and shoulders are painted on a subtle field of teal and light green. The viewer is positioned slightly below the animal which seems to tilt its head down inquisitively.

“Let’s Play ” another in the series depicts a smiling and curious baby elephant. Highlighted on one side with a swath of vibrant yellow-orange and surrounded by subtle paint splatters one can’t help but smile imagining the subject romping gleefully.

In December Carter will partner with Art in Bloom Gallery to benefit the Betty H. Cameron Women’s and Children’s Hospital. Ten percent of the proceeds from the work he sells will go to the hospital.

“Everyone needs to be socially responsible including artists ” he says. “If we can work on being good people first the rest will work itself out.”

The wide popularity of Carter’s moving and contagiously exciting paintings demonstrates the enduring value of social awareness and positivity.