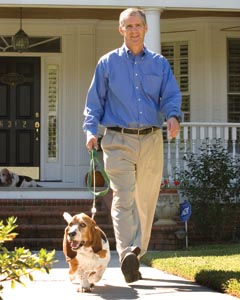 y 7 a.m. Dr. Richard Trotta has already been to the hospital and seen several patients before sitting down to talk about his experiences as a specialist in infectious diseases and as an Army doctor in Afghanistan.

For Dr. Trotta who retired from the Army as a Colonel the military was not only a career it was the way to achieve his lifes goal. “I wanted to study medicine my whole life ” he says. Trotta who grew up on Long Island graduated from Furman University in South Carolina. He enlisted in the Army and after seven years as an intelligence officer he finally realized his dream. A degree in medicine at the Uniformed Services University in Washington DC was followed by a residency in internal medicine and a fellowship in Infectious Diseases at Walter Reed Army Medical Center. He currently lives and practices on the Azalea Coast.

His medical specialty and the military were a fitting match. In his travels around the world for the Army Trotta saw a great deal of infectious disease.

No matter where our troops are sent it is the responsibility of a medical officer to make sure the soldiers are medically prepared for the assigned location. “For each deployment you study up on the area ” Trotta says. “I particularly enjoy getting troops ready to go to places like sub-Saharan Africa which requires a strong infectious disease background.”

For most of 2006 Trotta was the Senior Medical Officer for the forces in Afghanistan coordinating all medical efforts for the Joint Task Force (a combination of more than one military service). Though he traveled widely during his time in Afghanistan his “sleeping tent” was located in Bagram an Army airfield north of Kabul. Bagram is home to a huge medical complex that houses care facilities run by Americans and others including Egyptians and Koreans.

Trottas primary responsibility was to keep the forces healthy but he quickly discovered that was only the beginning of the job he faced. Another important component of the mission was the effort to win the hearts and minds of the Afghan people by providing healthcare to them. “And we did a lot of that ” Trotta says. 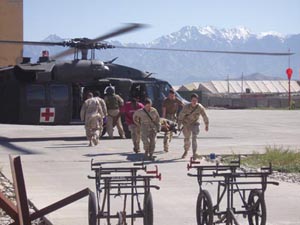 The scale of the problem was daunting. A rugged largely undeveloped country the size of Afghanistan is best illustrated by one of Dr. Trottas graphs which superimposes a map of the country over one of the United States. With the northwestern tip of Afghanistan anchored in Washington DC the southeastern tip grazes New Orleans. Its a large demanding often brutal setting.

“High desert ” Trotta says. “Temperatures of 110 during the day are not unusual. Thirties at night are common.” Combined with imposing mountains unexploded ordnance minefields and a lack of infrastructure these qualities create a uniquely challenging environment. Trotta describes it as “a tough place.”

The Army though focused not on the difficulties but on accomplishing the mission. “We did classroom work womens care veterinary care childrens care ” Trotta says. “We were outside in the middle of the desert delivering healthcare.”

The rewards were many. “If we opened up a womens clinic they would walk for days literally to get healthcare. And we did a lot of veterinary work because animals over there are a key part of their income. If their animals get sick or die theyre in trouble.” Trotta pauses to consider this fact and then says “Its interesting. After we would help them the way they would thank us is they would turn over their weapons caches that were in their area. Kind of an unusual way to get paid.”

Trotta also embraced the opportunity to assist Afghanistans health minister. “He was a great guy ” Trotta says. “Trained in Boston. He wanted sustainable hospitals and we helped him do that.” The health ministers goal was that no Afghan should be more than three walking hours from a medical facility. Working with the United States Agency for International Development (USAID) the military began putting up medical facilities throughout the country. “By the time I left ” Trotta says “about 60 percent of those were either under construction or completed. And they were getting filled with physicians.”

Though Trotta remains passionate about his contribution toward building Afghanistans healthcare infrastructure the well-being of the forces was his primary focus. “Evacuation policies were all us ” he says. Sick or wounded personnel had to be brought to Bagram treated and often sent on to Landstuhl in Germany for further treatment.

The scheduling and logistics involved in that effort was Trotta says the “easy” part. “My big problem was moving patients inside Afghanistan. If a soldier is wounded on a hilltop on the Pakistan border how do I get that soldier to a forward surgical facility for immediate care? How do I evacuate him from that forward surgical facility back to Bagram to the main hospital?” For Trotta moving a wounded soldier out of Afghanistan was no problem. “In country was the big dilemma.” 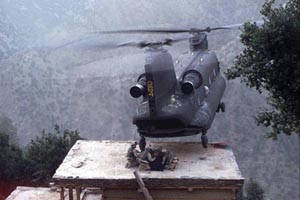 Evacuations within Afghanistan almost always involved helicopters. In a country that only had about 2 000 miles of roads during Trottas deployment (there are approximately 6.1 million miles of roads in the U.S.) helicopters provided the only viable alternative to surface roads. While battle evacuations are always difficult those in Afghanistan are particularly dangerous. “There were things a helicopter couldnt do because of the altitude. They dont operate over 10 000 feet too often ” Trotta says. “And when they do some of their equipment doesnt work.”

Even routine maneuvers take on a new dimension. For instance Trotta says “At higher altitudes you cant lower a rope and pull a patient into the helicopter. If you tried to do that the helicopter would go down.” In a country whose peaks rise above 24 000 feet that reality increases the risk to everyone involved.

“They would come to me and say theres a sick soldier here; do we have to get him now?” Evaluating the patient over a radio was Trotta says “very hard.” In addition evacuation decisions didnt only involve the injured soldier. “Inside the helicopter theres a crew and Im going to put the crew at risk at 10 000 feet. We would do that. If there was risk of life limb eyesight whatever we would send them. And we did … these were daily events.”

Such realities of military life left their mark on Trotta. “Only heroes fly helicopters ” he says simply. “Every time they step into one of those they know theyre going into a tough place. Any equipment malfunction is just deadly. And we lost several helicopters while we were there and the crews. There are very seldom survivors from a helicopter crash. Tough decisions; but the guys who are flying the helicopters I tell you those are incredible people.”

One of the hardest elements for Trotta was the human one. “You see a lot of American soldiers who are going out to do good things who get hurt. Badly. IED (improvised explosive device) strikes and roadside explosions are devastating things. So when you see an 18- or 19-year-old soldier whos missing a limb because he was out there trying to get water supplied to a city and got caught up in a bad situation thats a tough thing to handle. When youre the medical officer in charge of taking care of that soldier and you run into a resource constraint thats very frustrating.”

But its also rewarding. “I think we did a whole bunch of good things while we were there and when we left that Afghan health minister was very thankful. What we gave to them was the possibility. Its probably a grain of sand on a beach but what we gave them was a system that would build up into a complete medical system. To help them start to put that structure in place and to see it work was very gratifying. We helped thousands. There were people who were very thankful. Particularly if we helped their children or a family member they were forever friends.”

After 13 months in Afghanistan Dr. Trotta returned to the base in Italy from which he had originally deployed and then went on to the United States. After another year of practicing at Walter Reed Army Medical Center he retired from the military with 28 years of service and began to build a new life for himself and his family.

The choice of a new home was a family decision but Trotta admits that “after moving around all those years and the military telling us where to live my wife had a dog in the fight.” His in-laws had relocated to Wilmington several years earlier and this was an opportunity for his wife to live near her family. When a job offer came from Wilmington Health Associates Trotta took advantage of the opportunity.

His life here differs from his time in the military but he confirms it is anything but dull. “Im seeing more patients now than I ever have ” he says. And while diseases such as malaria may be rare now he still has plenty of work to do treating patients with pneumonia HIV infections tuberculosis surgical infections and flu. New MRSA strains (antibiotic resistant staph) have changed the nature of his work not to mention pandemics and potential pandemics.

As one of only a handful of specialists in infectious diseases in Wilmington Trotta welcomes the challenges he finds here. While the range of diseases may be different he says that “we see an incredible variety here in Wilmington. I guess because its a vacation spot we see a lot. Folks are coming in from all over. They bring a little bit of everything.”

He often uses his military honed skills to solve problems and work out logistical issues but Dr. Trottas focus is as always caring for the people who depend on him civilian or military. “Medicine is medicine ” he says “no matter where you do it.”