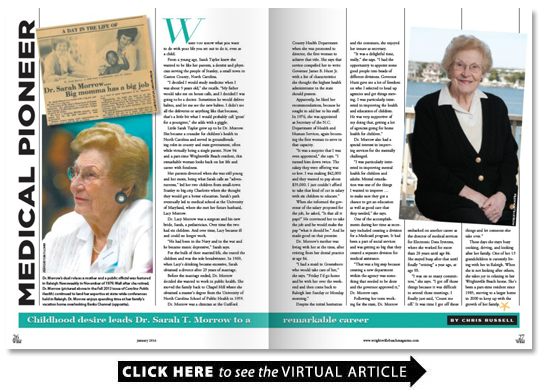 When you know what you want to do with your life you set out to do it even as a child.

From a young age Sarah Taylor knew she wanted to be like her parents a dentist and physician serving the people of Stanley a small town in Gaston County North Carolina.

“I decided I would study medicine when I was about 5 years old ” she recalls. “My father would take me on house calls and I decided I was going to be a doctor. Sometimes he would deliver babies and let me see the new babies. I didn’t see all the deliveries or anything like that because that’s a little bit what I would probably call ‘gross’ for a youngster ” she adds with a giggle.

Little Sarah Taylor grew up to be Dr. Morrow. She became a crusader for children’s health in North Carolina and served in groundbreaking roles in county and state government often while virtually being a single parent. Now 94 and a part-time Wrightsville Beach resident this remarkable woman looks back on her life and career with fondness.

Her parents divorced when she was still young and her mom being what Sarah calls an “adventureress ” led her two children from small-town Stanley to big-city Charlotte where she thought they would get a better education. Sarah’s path eventually led to medical school at the University of Maryland where she met her future husband Lacy Morrow.

Dr. Lacy Morrow was a surgeon and his new bride Sarah a pediatrician. Over time the two had six children. And over time Lacy became ill and could no longer work.

“He had been in the Navy and in the war and he became manic depressive ” Sarah says.

For the bulk of their married life she reared the children and was the sole breadwinner. In 1969 when Lacy’s drinking became excessive Sarah obtained a divorce after 23 years of marriage.

Before the marriage ended Dr. Morrow decided she wanted to work in public health. She moved the family back to Chapel Hill where she obtained a master’s degree from the University of North Carolina School of Public Health in 1959.

Dr. Morrow was a clinician at the Guilford County Health Department when she was promoted to director the first woman to achieve that title. She says that service compelled her to write Governor James B. Hunt Jr. with a list of characteristics she thought the highest health administrator in the state should possess.

Apparently he liked her recommendations because he sought to add her to his staff. In 1976 she was appointed asSecretary of the N.C. Department ofHealth and Human Services again becoming the first woman to serve in that capacity.

“It was a surprise that I was even appointed ” she says. “I turned him down twice. The salary they were offering was so low. I was making $42 000 and they wanted to pay about $35 000. I just couldn’t afford to take that kind of cut in salary with six children to educate.”

When she informed the governor of the salary proposed for the job he asked “Is that all it pays?” He convinced her to take the job and he would make the pay “what it should be.” And he made good on that promise.

Dr. Morrow’s mother was living with her at the time after retiring from her dental practice at age 84.

“I had a maid in Greensboro who would take care of her ” she says. “Friday I’d go home and be with her over the weekend and then come back to Raleigh late Sunday or Monday morning.”

Despite the initial hesitation and the commute she enjoyed her tenure as secretary.

“It was a delightful time really ” she says. “I had the opportunity to appoint some good people into heads of different divisions. Governor Hunt gave me a lot of freedom on who I selected to head up agencies and get things moving. I was particularly interested in improving the health and education of children. He was very supportive of my doing that getting a lot of agencies going for home health for children.”

Dr. Morrow also had a special interest in improving services for the mentally challenged.

“I was particularly interested in improving mental health for children and adults. Mental retardation was one of the things I wanted to improve ? to make sure they got a chance to get an education as well as good care that they needed ” she says.

One of the accomplishments during her time as secretary included creating a division for a Medicaid program. It had been a part of social services and was getting so big that they created a separate division for medical assistance.

“That was a big step because creating a new department within the agency was something that needed to be done and the governor approved it ” Dr. Morrow says.

Following her term working for the state Dr. Morrow embarked on another career as the director of medical services for Electronic Data Systems where she worked for more than 20 years until age 84. She stayed busy after that until finally “retiring” a year ago at age 93.

These days she stays busy cooking driving and looking after her family. One of her 13 grandchildren is currently living with her in Raleigh. When she is not looking after others she takes joy in relaxing in her Wrightsville Beach home. She’s been a part-time resident since 1985 moving to a larger home in 2000 to keep up with the growth of her family.