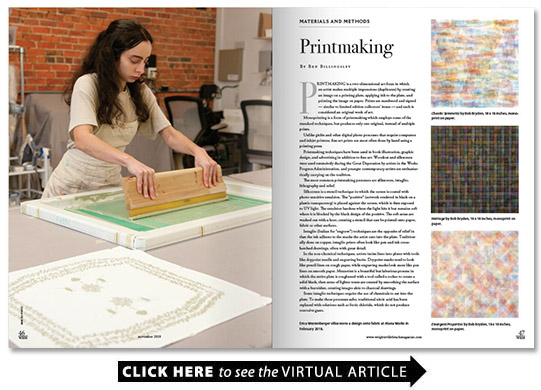 Printmaking is a two-dimensional art form in which an artist makes multiple impressions (duplicates) by creating an image on a printing plate applying ink to the plate and printing the image on paper. Prints are numbered and signed — similar to limited edition collectors’ items — and each is considered an original work of art.

Monoprinting is a form of printmaking which employs some of the standard techniques but produces only one original instead of multiple prints.

Unlike gicl�e and other digital photo processes that require computers and inkjet printers fine art prints are most often done by hand using a printing press.

Printmaking techniques have been used in book illustration graphic design and advertising in addition to fine art. Woodcut and silkscreen were used extensively during the Great Depression by artists in the Works Progress Administration and younger contemporary artists are enthusiastically carrying on the tradition.

The most common printmaking processes are silkscreen intaglio lithography and relief.

Silkscreen is a stencil technique in which the screen is coated with photo-sensitive emulsion. The “positive” (artwork rendered in black on a plastic transparency) is placed against the screen which is then exposed to UV light. The emulsion hardens where the light hits it but remains soft where it is blocked by the black design of the positive. The soft areas are washed out with a hose creating a stencil that can be printed onto paper fabric or other surfaces.

Intaglio (Italian for “engrave”) techniques are the opposite of relief in that the ink adheres to the marks the artist cuts into the plate. Traditionally done on copper intaglio prints often look like pen and ink crosshatched drawings often with great detail.

In the non-chemical techniques artists incise lines into plates with tools like drypoint needle and engraving burin. Drypoint marks tend to look like pencil lines on rough paper while engraving marks look more like pen lines on smooth paper. Mezzotint is a beautiful but laborious process in which the entire plate is roughened with a tool called a rocker to create a solid black then areas of lighter tones are created by smoothing the surface with a burnisher creating images akin to charcoal drawings.

Some intaglio techniques require the use of chemicals to eat into the plate. To make these processes safer traditional nitric acid has been replaced with solutions such as ferric chloride which do not produce corrosive gases.

In etching the plate is coated with a waxy acid-resistant ground. Lines are scratched through the ground with an etching needle. The plate then is exposed to the chemical that eats away at the exposed sections creating recessed areas for the ink. Aquatint is a chemical process that utilizes acid-resistant coatings and multiple etches to create a variety of increasingly darker tones.

All the intaglio processes require the use of a printing press that pushes dampened printing paper into the incised lines to transfer the ink from the plate.

Lithography is traditionally done on limestone. An image is drawn onto the stone using grease-based materials that eat microscopic depressions into the stone which attract the oil-based ink. Litho can imitate almost any drawing material and was widely used for printing money maps and other official documents in addition to fine art.

Relief printing is similar to stamping. In relief processes (woodcut and linoleum cut) the artist carves away the areas of the design intended to be white and ink is applied to the raised sections of the block. Relief prints make use of large solid areas of black and white and have strong graphic impact.

Local printmakers often create large-scale woodcut prints using a steamroller for a printing press (at UNCW late May odd-numbered years) and the Cameron Art Museum recently acquired a collection of modern American prints of all kinds.

Benjamin Billingsley is a painter and printmaker living in Wilmington North Carolina. He holds an MFA from UNC Greensboro and has exhibited work in the Southeastern United States as well as in Estonia Russia Japan and at the Pedvale Open Air Art Museum in Sabile Latvia. He has taught studio art and art history at Cape Fear Community College since 2001. In 2006 Billingsley received the Marilyn Goodman Anderson Endowed Award for Excellence in Teaching.He is also a frequent guest lecturer for the Cameron Art Museum’s docent program and the Osher Lifelong Learning Institute at UNCW. In addition Billingsley attended the No Boundaries International Art Colony on Bald Head Island (2016) and was a visiting artist at ECU (2019).