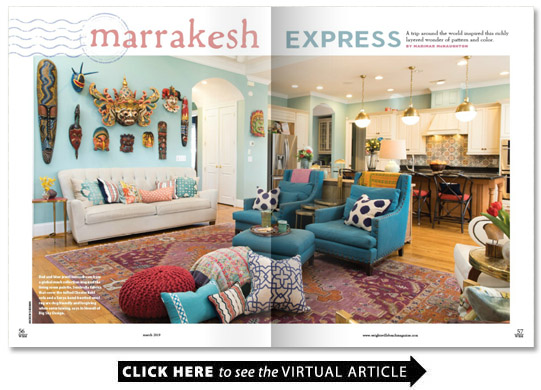 “People are surprised when they walk in ” says homeowner Joanna Miles-Basta. She and her husband actor Nick Basta keep homes in New Orleans where they were married and in New York City a classic Brownstone apartment. The couple purchased a permanent residence in Wilmington because of Nick’s career and at the time the city’s ties to a growing film industry.

One foot inside the foyer and guests enter another world. Bold hand-blocked gold leaf navy and green floral paper covers the walls warmed by a fluted iron and coppery finished pendant.

“That might be my favorite thing in the house ” Joanna says “that umbrella-shaped lampshade.” The scallop-edged light fixture was selected by Jo Howell of Big Sky Design to echo the mullioned shapes of the fanlight above the entryway. Appointed with a canvas-covered metal table placed over a sisal rug the foyer hints at the vibrant layers of wall tints and textiles that support an eclectic array of furnishings gathered from antique shops in Nola and the Big Apple and artifacts acquired by the couple’s travels.

“When Nick and I first met each other we took a trip around the world that took us to 17 countries. A lot of the things we picked up on that trip we have in our house ”

Joanna says. A wall tapestry from Nepal hangs in the dining room a Puerto Rican moon goddess mask above a living room sofa and four large ceramic platters were found at a Russian craft market when Nick was studying at the MXAT the Moscow Art Theatre a residency supported through Harvard University’s Actor’s Repertory Theatre Institute for graduate studies.

But not all of the couple’s accouterments are from their travels. Nick is also an accomplished potter and he made many of the objects; still others Joanna picked up at thrift stores Paysage Home and even HomeGoods. Some she spray-painted inside the craft room she shared with her daughter but that room over the garage has been co-opted as an audition space for Nick.

When it came to decorating the ground-level spaces and establishing a color palette Joanna turned to her mask collection.

“There is a particular mask that has this deep red … mixed with teals ” she says. The two colors were the jumping-off point for the living room palette.”

I had a lot of ideas ” Joanna says. “I would say that Jo’s knowledge made it come out looking like something. She knew how to make it all go together. She helped me pull together my eclectic style.”

Joanna is referring to interior designer Jo Howell of Big Sky Design. The two met through mutual friends and hit it off right away. Together they have been appointing the interiors since 2013.

“I was constantly asking Jo ‘Can we do this?'” Joanna says. “And she might say ‘Yes let’s do it or absolutely not.'”

Custom tile was incorporated into the kitchen backsplash and the table found at a New Orleans antique store anchors a traditional hand-woven rug in the breakfast nook. Mark Schmidt of Schmidt Custom Builders also built the banquet set into the bay window tossed with pillows in vibrant hues that echo the turquoise and magenta jewel tones found throughout the home.

Color is very important to her but Joanna wanted her bedroom to provide a relaxing break from the rest of the house. Jo Howell remembers this was the first room on which they collaborated. Working with a vintage Moroccan wedding blanket a French African Cameroon headdress Ikat-dyed pillows and the portrait of daughter Corrina Basta 11 by Louisiana artist Edward Cappel they developed an understated yet luxurious bejeweled palette blending pearl platinum and gold tones. Jo took her cues from the room’s high ceilings with the placement of a four-poster bed and a mirrored Art Deco chest for the chinoiserie-inspired assembly of Asian-infused wall coverings textiles and finishes.

It was in the master bedroom where the global theme began to simmer and soon Joanna and Jo were allowing the collection of artifacts and antiques to drive the acquistion of new pieces.

“Joanna took the lead ” Jo says. “She has an eye for rich lavish textiles inspired with everything global. She’s always picking up beautiful damask fabric and bringing it to me saying ‘What can we do with this?'”

At 11 years of age Jo says Corrina has moved her doll and puppet collections into the playroom down the hall; and while she has outgrown her childhood tastes and is maturing into the tweens her style also incorporates some nostalgic pieces and dashes of whimsy. Her best friends who live in Wrightsville Beach were also an influence because Corrina wanted her room to reflect the coast in pastel sea glass colors while minting her own uniqueness.

Traveling room by room the design duo slowly but surely wended its way into the formal dining room.

The dining room palette was minted on the golden Nepalese tapestry one of Joanna’s finds. Jo resourced the crushed velvet and metallic fabric that upholsters the backs of the host and hostess chairs at the heads of the table. Describing the couple as very funny very witty with a great sense of humor Jo found Joanna and Nick entertain many friends during dinner parties.

A few paces away off the foyer a short corridor leads dinner guests toward the rear of the home and the living room. “It’s their runway ” Jo says.

A pit stop in the powder room finds a tiny water closet festooned with a collection of Joanna’s mother’s antique tennis racquets. The quirky display is as much an homage to Joanna’s victories on the juniors’ circuit as it is to her coach. The leather bindings were the inspiration for the custom Benjamin Moore wall paint.

The living room’s palette is a subdued version of more lively colors and patterns and the area was purposely left open for large gatherings Jo says. The idea is to relax after dinner on oversized Turkish-style pillows arranged on the Oriental rug. In the traditional American-style setting she adds “It’s nice to be more loose and casual.”

Open to the kitchen and the breakfast nook and a backyard cabana and pool the living room was centered on a firebox with granite surrounds flanked by built-in bookshelves niches and cabinets. Mark Schmidt completed the renovations replacing the firebox with a true wood-burning fireplace and the granite finishes were replaced with hand-blocked tiles. After selecting a tile pattern the choice was customized with tones that echoed the colors found in the mask collection. Scalamandre’s red lacquer wallpaper against the off-white cabinetry helps showcase Nick’s hand-thrown pottery collection and the couple’s treasured objet d’art.

In New York the vibrant earthy tones of their apartment echo the proliferate use of wood found throughout; in the New Orleans house the interior walls are hot pink and the exterior painted a shade of purple.