The 1920s and 1930s were a kaleidoscope of fashion and dance changes at Lumina Wrightsville Beach’s and North Carolina’s legendary oceanfront pavilion. Ladies’ hemlines rose and bathing suits shrunk — shocking new styles emerged that revealed a woman’s entire leg! Deliberate tanning became more fashionable. And new dances like the Charleston and the Shag shaved pounds of wax off the dance floor. 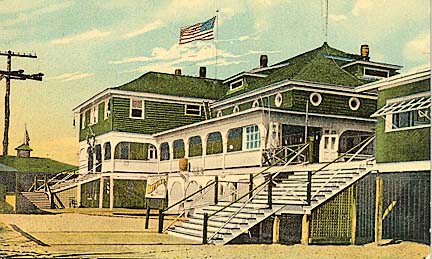 To manage all the fizz and pop of change Lumina management decided to hire a “Supervisor of Manners” named Mrs. Cuthbert Martin. Mrs. Martins duties included searching out and correcting those who wore immodest clothes policing dance partners for kissing infractions and keeping tabs on anyone suspected of having had a “drink in the dunes.”

Actually imbibers had few options at Lumina during Prohibition. Most carried a flask or Mason jar of whiskey produced either in an eastern N.C. liquor still or smuggled in from a boat or temporary storage in the U.S. Custom House. The U.S. Coast Guard ship Modoc stationed in Wilmington frequently ruined the day for “rum runners.” A good raid could confiscate hundreds of cases of “spirits.” The bottles were usually smashed by officials on Water Street to the grief of many onlookers.

Serious alcohol or general behavioral offenses called for a bouncer named William B. “Tuck” Savage a large man who could calm things down with a scowl. Savage a part-time police officer worked primarily for Tide Water Power the company that owned Lumina. In addition to his duties as bouncer “Tuck” was also employed as a claim agent a Lumina lifeguard and a streetcar operator. In fact he was said to have been motorman for the first and last streetcars ever run in Wilmington.

Savage had a quirky and irrepressible sense of humor. In 1924 perhaps after having his fill of fine orchestra music at Lumina he announced plans to form a new band called “Tuck Savage and his Nut Band.” He put out a call for “musicians” who were proficient in playing cans “cow horns tin whistles ocarinas and other eenas.” Pointing out the success of jazz bands that recorded Victrola records “sold as canned music ” he planned to “reverse the process and make music from cans.”

In 1923 it took about 40 minutes on the beach car to go from Front and Princess streets to Lumina. Cars ran every 30 minutes. Once there patrons were presented with many recreational choices including the usual fun of romping in the surf swimming races and rope-climbing contests a 75-yard dash bowling and diving off a platform that was newly added to Luminas sound-side property. Some people chose to simply watch waves break from the “hurricane deck” an ironic name for the much-photographed elevated ocean terrace where a stiff breeze was “the usual.”

In 1924 the Lumina campus contained something else new: a group of small residences known as Pomando Walk. Named for a city in Florida the spelling eventually matched the common mispronunciation: Pomander. The area consisted of 16 three-room apartments and 4 four-room apartments. All the cottages surrounded a carefully manicured quadrangle. The Pomando Walk units rented for $20 a month which included gas water and electricity. The late television broadcaster David Brinkley lived there as a boy. Brinkley also worked at the pavilion where he changed innumerable light bulbs.

Dance music was often provided by the Weidemeyer ensemble or Jelly Leftwichs Duke University Orchestra. The Weidemeyer Orchestra of Huntington West Virginia occasionally staged ribald plays at Lumina but usually they simply played good dance music. They performed during mealtime at the Oceanic then proceeded down the boardwalk to Lumina. They allowed children to carry their instruments a great honor for locals like the late Johnny Metts and Tom Wright Jr. Wright a member of the family for whom the beach was named carried a trumpet. Wrights sister the late Eleanor Wright Beane said her brother was “so proud you would have thought he was carrying the crown jewels.”

Just a few miles north of Lumina another pavilion hosted great bands for a short time in the early 1920s. Shell Island was a black resort at the time and jazz musicians such as Professor Walter Green Lindsay Brown John Cabbage Walker and Johnsons Broadway Jazz delighted large crowds there. Tom Wright Sr. and Charles Parmele owned the resort then. Numerous African Americans who lived on Wrightsville Sound worked at both the Shell Island resort and at Lumina.

Childrens Night was a standard weekly feature at Lumina. Children who had taken lessons with Miss Leonora Cantwell performed on the dance floor while their parents watched from the gallery. Eleanor Wright and William Beane met at the dance class in the early 1920s and were married in 1938. “William hated dance lessons ” Mrs. Beane said in 2000. “He had been forced to come in from whatever nice thing he was doing and go to Lumina and he had to go dressed in a sailor suit. William danced with me and pulled my curls. I remember it just as well.”

The children also enjoyed the silent movies projected on the screen that sat in the surf. Though jerky and hard to see those early motion pictures were still the most modern thing around. Youngsters who measured 51 inches tall or less were admitted free to the theater once a week for the movies as well as dancing games and plays. When “talkies” emerged the little theater lost a lot of its appeal because the sound of the waves drowned out the voices.

In a follow-up interview in 2008 Wilmingtonian Harry Stovall spoke about the dance talent displayed on most any Saturday night at Lumina. Stovall was a student at UNC-Chapel Hill in the late 1930s and remembers being home summers during those years and doing the Shag at the old pavilion. “Harry Payne and Linwood Green were very good dancers ” recounted Stovall recently. “They concentrated on it and loved it. Catherine Emerson was a good dancer too. Atha Josey who became a professional dancer was a fixture at Lumina. I danced many nights to the music performed by Jelly Leftwich and his orchestra. Jelly wrote the Duke fight song the one theyre still using.”

Katherine Meier another dancer who emerged in the 1930s also became a professional dancer. Meiers parents Beulah and Richard met at Lumina where they subsequently conducted dance classes. “It was the electric power company that ran the place ” said Beulah Meier in 1980 reminiscing about the Wrightsville Beach she remembered from the 1920s. The Meiers taught Lewis Philip Hall among other gifted students to dance. Hall originated a version of the Shag that he debuted in 1928 in downtown Wilmington and at Lumina. In muted form today it is the state dance of both North and South Carolina.

In the late 1930s a talented singer and pianist began performing non-professionally at Lumina. She was a former uptown club singer in New York and had gone by the stage name Nina Rhodes. But in Wilmington she was a newlywed named Hannah Block. “Wherever I was I played and sang ” said Block recently at age 94. “Lumina was a place of great romance and many people met their future spouses there. In the 40s I helped transport service men from the USO Club downtown at Second and Orange streets to Lumina so that they could meet some nice girls. It was a great place for matchmaking.”

The stock market crash of 1929 caused economic woes that lasted through the 30s. Nevertheless Lumina managers rallied. One of the more creative events of that period was a “Depression Dance.” Guests were asked to “come in their most strikingly dilapidated costumes.” Both Paul Whiteman and Kay Kyser began to perform at Lumina during this period. By day the pavilion continued to offer a good value per ticket. Folks who couldnt afford a beach house could feel as if they owned oceanfront property if only for a little while.

The year 1939 brought about the end of an ownership era at Lumina. Tide Water Power Company sold Lumina and Pomander Walk to Charles Parmele and P. R. Smith. The new owners renamed Pomander Walk “Lumina Cottages.” Otherwise the beloved pavilion operated as usual despite the fact that World War II would soon black out some of the fun.

To be continued in the september 2008 issue of WBM.