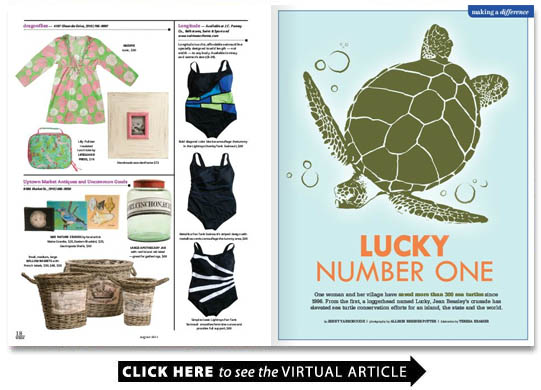 One woman and her village have saved more than 300 sea turtles since 1996. From the first a loggerhead named Lucky Jean Beasleys crusade has
elevated sea turtle conservation efforts for an island the state and the world.

For Jean Beasley founder and director of the Karen Beasley Sea Turtle Rescue and Rehabilitation Center and fifth-year member of the board of directors of the International Sea Turtle Society its not just about the sea turtles although theyre what shes devoted her life to its about the entire world.

“My grandmother used to find the grain of fabric by pulling a thread out and then it made it easier to rip right down that weak place where she pulled the thread ” Beasley explains as she sits outside in a plastic chair stroking Mama Kitty a formerly feral kitten whos been living at the turtle hospital since she was taken in by Beasley.

“I saw her do it a million times as a little kid. And thats what were doing on this planet. The fabric of life on the planet we are ripping those threads out and pretty soon it could be so weak that well not be able to preserve it ” Beasley says.

Since 1958 the year North Carolina native Beasley remembers herself as a new bride shes spent every summer on Topsail Island. Later after retiring as an educator and administrator for multiple school systems mostly in Ohio Beasley retreated to Surf City for good.

But during the summer of 1970 Beasley saw something new something that would forever change her view of the world her life as a mother and her role as an educator.

The sand was dark barely illuminated by the dull light of the moon. Just beyond the stairs leading from her porch to the sea was a relic of the past a giant loggerhead beginning to nest.

Beasley and her family watched whispering among themselves gently as to not disturb the mammoth creature. They watched as the mother endured the arduous process. Using her flippers to conceal herself with sand until she appeared at first glance to be a miniature dune she laid her eggs into a hole where her offspring around 100 would incubate safely from predators and high tides. Then after a grueling hour or two she trailed back into the ocean until like a dream she was gone.

“Its one of the miracles of life ” Beasley recalls “that a creature of the ocean a marine animal would do something to carry on the species would subject herself to the dangers of coming out of her habitat itd be sort of like us going to the moon just to lay her eggs.”

Beasleys chance encounter roused her and her children. The species part of the Cheloniidae family dwelled with and outlived the prehistoric creatures of more than 100 million years ago.

And even as little as 40 years ago not much was known about the marine reptilians that spend most of their lives under the water.

“Theyre such ancient creatures ” Beasley says. “They existed before the age of the dinosaurs and they survived all the cataclysmic events that changed the planet and wiped out the dinosaurs theyre still with us today. I wish I knew what it was I wish I could bottle it up “

But before she furthers her reasoning behind later efforts to conserve the sea turtles Beasley shrugs her shoulders.

“Im a lover of all kinds of animals ” she says. “Im also an environmentalist and a conservationist. All of those things led me to care about sea turtles.”

Each morning every summer after the loggerhead sighting Beasley and her children Karen Kevin and Barney awoke for their daily routine.

“The children and I ” Beasley recalls “wed go up and down the beach with a broom and rake and erase the tracks (left by nesting mother turtles) so that nobody would bother the nests.”

What little was known so many years ago about the turtles was speculation and myth. A common belief still practiced in some South American countries is that the consumption of sea turtle eggs is an aphrodisiac.

“We knew that people dug their nests ” Beasley says.

And so began her earliest conservation efforts. The Beasleys held themselves accountable for Surf City and part of what is now North Topsail Beach. As the familys curiosity grew they counted the nests and sent the results to the state wildlife authorities.

By the late 80s Karen Beasley founded Topsail Turtle Project one of if not the first sea turtle beach monitoring system on the East Coast leading the way for others like the Wrightsville Beach Sea Turtle Project.

But the nests the boils and the hatchlings returning to sea Beasley would soon discover were just the beginning. Each year the animals would become more and more susceptible to fishing line entanglement consumption of plastics mistaken for food injury due to run-ins with watercraft and cold stuns.

After the passing of her daughter Karen who died of leukemia Beasley founded the Karen Beasley Sea Turtle Rescue and Rehabilitation Center in her memory in 1996. At the time there was only one in Marathon Key Florida.

“That was really the first one ” Beasley says “outside of some little corner somewhere where they might have a tank or two for a sea turtle in an aquarium but it was not a hospital. In most cases they were not getting medical care.”

North Carolinas coast is home to three species of turtles: green Kemps Ridley and the most common loggerhead. Rare sightings of leatherback and hawksbill have also been reported. All are threatened or endangered.

Though Beasleys passion for the creatures is obvious she admits she never had intentions of creating a hospital for them. But then there was the first patient.

Lucky Beasley recounts for a large audience that assembled on June 1 prior to this years mass release of rehabbed turtles “was cared for in a volunteers backyard at the edge of the sound. We passed a hat to buy a tank that was on the trash pile at Pine Knoll Shores (Aquarium). We fixed it up and used it ” she explains.

Today that tank is in continued use located inside an 850-square-foot facility built in 1997 on a piece of property leased by the town of Topsail Beach at the rate of $1 per year. And though the building served its purpose better than a volunteers backyard from the day they moved in Beasley knew it would be too small.

With minimal resources volunteers worked miracles in the space. Oftentimes at max capacity there were turtles in tanks in the bathroom. And when there was no more food and not enough money to buy it Beasley took to the dock pole in hand and fished until there was enough for all the turtles the turtles who surface at the sound of her voice and dance when she scratches their bellies. On release day in June the number of turtles freed brought the total to more than 300 turtles that Beasleys hospital has saved since the doors opened.

The hospital attracted worldwide attention when Beasley was named Hero of the Year in 2007 by Animal Planet. Visitors from all 50 states and more than 90 foreign countries have visited and oftentimes were called to donate. The hospital collected funds penny by penny through the years to continue its efforts in the hopes of someday moving somewhere with walking space.

But a brighter future is right around the corner. Nearly complete and scheduled to open sometime during the winter a new much larger hospital will help carry on the mission and will feature an additional patient room an isolation room for diseased turtles a lab a surgery room a kitchen two full baths an observation deck an indoor gift shop and room enough for school children and other visitors.

Before the release of what will probably be the last to come out of the current facility Beasley took a moment.

“I wonder if ” she says “when we leave and we take away all the turtles if the building will still sound with their breathing and their flippers. This is a special place.”

But her sadness was soon overcome with a mothers joy probably similar to the feeling that loggerhead long ago felt as she left her nest knowing her work was done.

“At some point ” Beasley says “in the new hospital I have a plan to hang 5 000 little turtle cutouts to the ceiling at different heights and its going to be all along that main hall which is 152 feet long by the way and it will take that much to hang 5 000 turtles and the message is going to be when you come through the door There are 5 000 hanging in this room. Most likely not more than one at best will survive.”

Is there hope for the worlds sea turtles?

Beasley answers “Its not just about the sea turtles. The sea turtles are canaries in the coal mine Theyre trying to tell us things are out of balance theyre in bad shape. Weve polluted our oceans. Weve filled them with plastics. Weve filled them with toxic chemicals. Weve upset the balance of nature the predator-prey balance. For there to be hope there has to be a way to improvement. Of course that is the hope of all conservationists or wed give up. But if you give up you know that it would be a lot worse.”

Its only now that Beasley is finally beginning to see the results of her earliest efforts that began 41 years ago. Because the average loggerhead reaches sexual maturity at age 35 those sea turtles born of eggs delicately disguised each morning by Beasley and her children are finally ready to return to the nesting grounds where their mothers did so many years ago.

“The bottom line is all of us could do more ” Beasley adds. “Wherever you are in the spectrum theres always something more you can do and if every person did one thing we can change the world.”