Love Letters from the Battleship 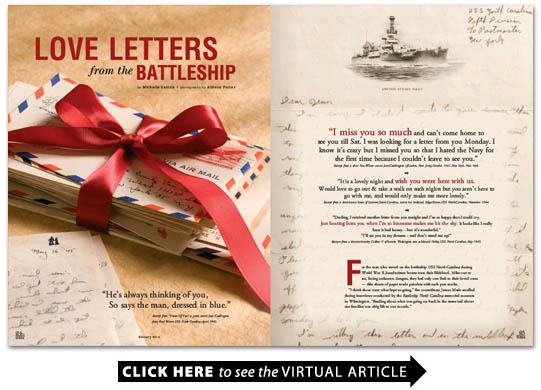 “Hes always thinking of you So says the man dressed in blue.” Excerpt from “Vision Of You ” a poem sent to Jean Coddington from Paul Wieser USS North Carolina April 1942.

“I miss you so much and cant come home to see you till Sat. I was looking for a letter from you Monday. I know its crazy but I missed you so that I hated the Navy for the first time because I couldnt leave to see you.” Excerpt from a letter Paul Wieser sent to Jean Coddington of Linden New Jersey October 1941 New York New York.

“It is a lovely night and wish you were here with us. Would love to go out & take a walk on such nights but you arent here to go with me and would only make me more lonely.” Excerpt from a letter Laura Stone of Laurens South Carolina sent to her husband Edgar Stone USS North Carolina November 1944.

“Darling I received another letter from you tonight and Im so happy that I could cry. Just hearing from you when Im so lonesome makes me hit the sky. It looks like I really have it bad honey but its wonderful.” “Ill see you in my dreams and dont stand me up!” Excerpts from a letter written by Colleen P. of Seattle Washington sent to Edward Dilley USS North Carolina May 1945.

For the men who served on the battleship USS North Carolina during World War II handwritten letters were their lifeblood. Miles out to sea facing unknown dangers they had only one link to their loved ones thin sheets of paper made priceless with each pen stroke.

“I think those were what kept us going ” fire controlman James Masie recalled during interviews conducted by the Battleship North Carolina memorial museum in Wilmington. “Reading about what was going on back in the states and about our families was a big lift to our morale.”

The museum has a cache of World War II-era letters Valentines Day cards sweetheart pillow covers and wedding memorabilia in its archives. These keepsakes offer insight into the past insight into the lives of the young men living aboard the North Carolina and insight into the women they loved and had to leave behind.

Paul Anthony Wieser who served as a boatswains mate first class on the USS North Carolina during World War II wrote about 600 letters all of which were donated to the archives. They were sent to his girlfriend and later wife Jean Coddington a childhood neighbor in Linden New Jersey.

Wiesers letters bring to life a different era as he writes about his high school gang the Batch roller skating ice skating and popular radio music including the first time he heard a famous holiday tune.

“I had a chance to listen to the Hit Parade yesterday it was swell ” he writes in a letter to his sweetheart in November 1942. “Third place was My Devotion second Praise the Lord and Pass the Ammunition. Do you know (where) that title came from a chaplain said it on
Dec 7 at Pearl Harbor the hoist broke down and they formed a line to pass the ammunition to the guns. First place was a song I never heard White Christmas it struck a high spot by me too.”

This letter in particular and one on which Wieser drew stick figures holding semaphore flags to tell Jean he loved her are among those that captivated author Cindy Horrell Ramsey of Pender County who interviewed Wieser and other veterans for her 2007 book “Boys of the Battleship North Carolina.”

“It impacts you immediately as to how young they were and how innocent they were ” says Ramsey who found inspiration from the letters for her next project a novel to be called “600 Letters Home.”

Laura Stones November 1944 letter to her husband Edgar Stone describes the weather as a dark rainy blue day and how she wishes he was there.

The letter also includes a note from their daughter Mary: “We are listening to dark waters on the radio. We are going to see the picture of it. Mama washed my hair and rolled. Mama said she was going to take my hair down in the morning so it will be curly.”

A lifeline and a lost art

Paul Wiesers letters were stored for years in the attic of their home in his wifes hope chest after the war. Their son Paul Wesley Wieser of Phoenix Arizona recalls seeing them bundled in stacks while he was growing up in Linden. He was about seven then but he and his brothers did not hear about the letters again until he was about 50 when his father moved to Wilmington to be closer to the battleship.

“As he got older he began to speak more ” the young Wieser says. “It became a whole different kind of relationship.”

Jean Wieser died in 1958 and Paul Wieser who died in 2006 donated his love letters to East Carolina University. Later they were transferred to the Battleship North Carolina museum.

“It was then about the only way to communicate ” their son says. “A phone was a luxury for many many people.”

Sometimes words were not enough as the elder Wieser writes in many of his letters.

“I wish I could see you soon but I guess thats going to be impossible for a while ” Wieser writes on December 16 1941 a little more than a week after the Pearl Harbor attack. “I did so much want to talk to you before we left for good. I could write it but Id rather tell you face to face.”

Depending on where the battleship was deployed some letters would not make it home for a long period of time. False news stories including some broadcasted by the enemys Tokyo Rose reported that the North Carolina had been sunk Ramsey says.

“They didnt know if they were OK ” she explains. “When they didnt get letters youve got to imagine”

“I wish you could get our letters every day ” she writes. “We write you almost every day for I know how much it means to hear from loved ones.”

“Take good care of my sailor ” she later writes. “Think of us often & write all you can. We are always thinking of you and miss you so.”

Letter writing is a lost art Ramsey says adding that other forms of communication are easier and immediate but lack the same intimacy as a handwritten letter.

Hearing from a wife or girlfriend was most important James Masie said adding that the anticipation would build when crewmen sometimes had to wait a month or more for mail.

“I think the two most important calls were chow and mail calls ” he said. “Some received news of death in the family or friends and some of us received Dear John letters. These always hurt the most.”

Passions were censored during the war because letters had to be proofread so that unauthorized information could be cut Lt. Tracy Wilder said in the Battleship North Carolina collection; but some crewmen were quick to let their feelings be known once censorship was cancelled in September 1945.

“A letter to my wife postmarked September 5 1945 Tokyo Bay reported that Bob Phillips our communications officer had just come into the wardroom to announce that censorship was officially cancelled ” Wilder recalled. “I then proceeded to write what had been on my heart and mind all those months away but couldnt let the censors know it. That letter probably should be X rated.”

After two years in the South Pacific when the North Carolina made a trip home to Bremerton Washington in 1944 many couples tied the knot.

Letters were the backdrops for courtships engagements and even early married life.

Paul and Jean Wieser were among the couples who shared proposals by mail; he sent an engagement ring to his brother with a letter asking him to propose to Jean on his behalf.

“He didnt know when hed be home ” Ramsey says.

The couple was married in August 1944 in Linden and honeymooned in New York City sharing only 30 more days of newlywed life before the battleship set sail to the South Pacific. Jean lived with her mother and continued corresponding with Paul until he was discharged in 1946.

For her and many others waiting became a way of life.

After her engagement in May 1942 Tay Cope waited 27 months to marry Edward Cope an electricians mate first class. Their initial wedding plans were postponed when the North Carolina was deployed to the Pacific.

After a voice lesson in New York City in August 1944 Tay called her mother from a Trenton railroad station and learned Ted was back home museum archives document.

“When he walked into my home it was one of the most wonderful days of my life ” recalled Tay in the battleship collection.

Days later they were married at her church. Going to the West Coast with him to Bremerton until his leave was over Tay journeyed home to wait for him.