Lose Yourself On Grandfather’s backcountry trails 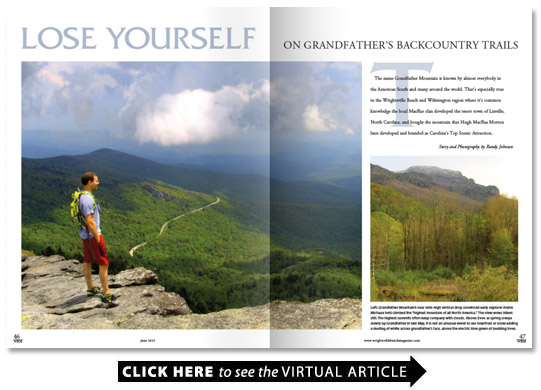 The name Grandfather Mountain is known by almost everybody in the American South and many around the world. That’s especially true in the Wrightsville Beach and Wilmington region where it’s common knowledge the local MacRae clan developed the resort town of Linville North Carolina and bought the mountain that Hugh MacRae Morton later developed and branded as Carolina’s Top Scenic Attraction.

The hiking — across peaks up ladders and over cliff faces — is so spectacular it recently joined the Grand Canyon and other famous natural areas viewable on Google Map’s Street View through the Trekker project. Now those who can’t make the hike can see what it’s like.

Just before he died in 2006 Morton brought in his grandson Hugh MacRae “Crae” Morton III to spearhead the future. In 2008 that meant selling the vast bulk of Morton’s mountain to the state of North Carolina.

Today Grandfather Mountain has become two entities: One Grandfather Mountain State Park that encompasses the popular trails and loftiest summits a publicly owned state park that stopped charging the hiking fees collected under Morton’s ownership; and the other a private attraction the swinging bridge still owned by Morton’s heirs operated as a nonprofit foundation intent on stewardship and environmental education.

Now entering the backcountry and even hiking into the attraction is free if you have the energy to hike back without the need for someone to rescue you. That change is taking a little getting used to for a public long-accustomed to Hugh Morton’s single-minded vision of Grandfather as “his attraction” — which actually is just a tiny part of a much bigger and misunderstood mountain.

The process that ultimately preserved most of the mountain started in the 1970s. By then an early trail system built by a Blue Ridge Parkway ranger had become completely overgrown. When a hiker died of hypothermia on those vanishing paths Morton put up no-trespassing signs and closed Grandfather’s backcountry.

Future development of the wilderness was averted by a 30-year saga that eventually saw Morton turn from commercializing the slumbering backcountry to helping save it. To avoid controversy over closing the trails Morton was persuaded to charge a hiking fee and use the money to shore up the dangerous paths.

Over ensuing years hordes of hikers discovered why the mountain was named a North Carolina Natural Heritage Area in the late ’70s. Researchers began to document the mountain’s unappreciated biodiversity and a “new side” of Grandfather started attracting public appreciation. By the early 1990s Morton had been persuaded to sell conservation easements on portions of the mountain — just as controversy exploded over his plans to develop a new resort on the almost 3 000 acres we now see preserved as a park. He and a partner proposed building upscale homes on one of the mountain’s most pristine parcels closing an ancient trail that led early explorers to the peaks.

Fortunately The Nature Conservancy which calls the 6 000-foot Calloway Peak a “globally significant site” for biological diversity and contributors like Fred Stanback Jr. of Salisbury’s Stanback Headache Powder Company and wife Alice Stanback bought the property and secured its preservation.

Whether you drive up or climb on foot you won’t regret visiting the Canadian climate on Granddad’s summits.

The attraction’s motorists have the easiest access to the peaks via the Grandfather Trail from Black Rock Parking Area. It’s a strenuous high-adventure ladder-climbing hike. The trail immediately enters the state park to climb MacRae Attic Window and Calloway peaks. It’s only about 5.4 miles round-trip — but it feels longer. A shorter spectacular loop over MacRae Peak is only 2.6 miles.

From valleys to the east and west of the ridge state park trails climb the peaks. The Profile Trail from near Banner Elk connects NC 105 to Calloway Peak a strenuous 7-mile hike that puts you eye-to-eye with Grandfather’s famous face. From the east the Daniel Boone Scout Trail (the easiest route to Calloway) rises to Calloway from the Blue Ridge Parkway (Boone Fork parking Milepost 299.9) a roundtrip of 5.6 miles.

Also from the Parkway the Cragway and Nuwati Trails provide easier (about 3-mile) hikes with some of the mountain’s best views. The Black Rock Trail on the attraction road is another easy route to great views for a 2-mile hike.

Author Randy Johnson’s new book Grandfather Mountain: Appalachian Icon A History and Guide will be available from the University of North Carolina Press in early 2016. Johnson’s other books Hiking the Blue Ridge Parkway and Hiking North Carolina contain the best descriptions of the trails. www.randyjohnsonbooks.com