The instrumentation shop for the marine technology program at Cape Fear Community College (CFCC) has a small sign that reads: Tell me and I forget; show me and I remember; involve me and I understand. Department chair Jason Rogers says that since 1965 back when the school was called the Cape Fear Technical Institute the marine technology program has been a launching pad for careers offering hands-on experience that has remained its backbone to this day. “Most of our hours are laboratory hours ” Rogers says. “We spend very little time on theory because theory isn’t really applied in a technician’s life out on the job.” 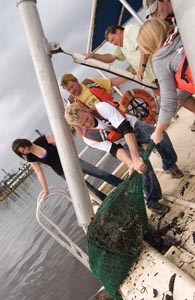 The marine technology program teaches students to become “the hands of science ” working as scientific support technicians. When students finish the two-year program and earn their associate and applied science degree they’re qualified for an array of jobs. Some alumni manage fish populations for the North Carolina Division of Marine Fisheries. Others work as observers for the National Marine Fisheries Service monitoring the by-catch of commercial fishermen which would include any unwanted marine life that’s caught like dolphins seabirds or turtles. Alumni also work on research vessels chartered by scientists making sure the gear is operating and helping the lead scientist complete his or her objectives.

“This is work force training ” Rogers explains. “Our job placement rate is outstanding because we’ve been in existence for 40-plus years.”

Right now the most lucrative field that students are trained in is hydrographic surveying. The Army Corps of Engineers hires alumni to map the bottom of the Cape Fear River so that the proper amount of silt can be dredged allowing ships to pass through without scraping any sediment buildup. Alumni also work for dredging companies as well as companies searching offshore for petroleum reserves. They run acoustic gear that can map the bottom of the ocean tens of thousands of feet below the surface to see what’s hiding down there — whether it be shale or oil.

Program instructor Captain Steve Beuth says the 32 days that students spend at sea are what bring forth so many opportunities. “You can’t simulate what we do on the water in the classroom ” he explains. “The practical application of textbook knowledge is really the strength of the program and makes the students a lot more desirable in the eyes of prospective employers.”

Beuth has worked for the department since 1976 and has sailed on almost 370 voyages mostly aboard the program’s largest vessel the R/V (Research Vessel) Dan Moore which spans 85 feet and can sleep up to 26. His safety record is unblemished. 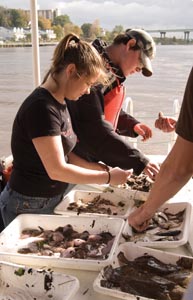 During their two years students get five training cruises on the Dan Moore and countless day excursions on smaller boats. Their first trip is a four-day indoctrination cruise to simply get them working safely and to immerse them in the environment. This is usually when students find out what life at sea is really like.

“You’re living on a boat with 20 other people for days at a time ” says current senior Lydia Tobolski. “That in itself is an experience.”

Tobolski says that despite tight quarters and stressful situations like storms or seasickness “There’s probably less drama than there is in an office or working in a restaurant.” She adds “You’re stuck on the boat and you’re not going anywhere — you might as well get along.”

The second and third cruises go to Charleston South Carolina and the fourth takes students to Baltimore Maryland. Each trip has its own theme — like biology hydrographic surveying water quality and analysis — and there is a final cruise that tests their cumulative skills. In addition to visiting Charleston’s bustling maritime seaport and Baltimore’s National Aquarium students head to the Bahamas.

“On the Bahamas trip ” Beuth says “the big attraction is the clear water and the abundant marine life. Students have the opportunity to snorkel and identify all the different specimens. It’s a great place to use our ROV (remotely operated vehicle) with the camera on it because it’s so clear. And … it’s a trip to the Bahamas!”

Even though it sounds like a vacation Beuth says his students are hard at work. “Students steer the ship plot positions check the compass for errors calculate the estimated time of arrival at upcoming destinations and factor tides and currents.”

Students also learn that tasks they mastered on land can be much more challenging at sea. “Being able to tie certain knots in a classroom is really easy ” Rogers explains “but when the gear is under strain and you’re on the boat pitching and bobbing tying that knot could be a totally different experience.”

Along with the technical training students receive most garner an appreciation for the natural world. “There’s a splendor out there ” says Beuth. “With the sunrises and sunsets the starry nights the marine life and the dorsal fins knifing along the surface the flying fish that land in the ship sometimes the bioluminescence [the little sparkling microorganisms that you see at night] and the sargasso weed these huge patches of floating seaweed all tend to coalesce into one so sometimes there are acres and acres.” 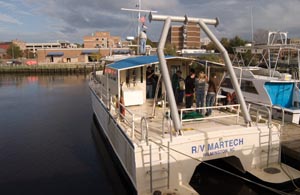 Senior Marissa Salvitti recalls seeing dolphins on the bow for the first time. “We were leaning over like a Titanic moment and there were all of these dolphins. They come out of nowhere and they just make you appreciate things. You’re out in the ocean with nothing in sight but the horizon and you feel so small.”

School president Malcolm McLeod worked with Captain Art Jordan and Ed Foss an oceanographer in founding the department in the mid 1960s. It was the first of its kind in North Carolina and second in the nation.

Jordan secured much of the early funding while Foss acted as the first department chair in charge of scientific education. Soon biologists Jim Martin and Thomas Rhodes along with chemist and oceanographer Dale Buck became the first instructional faculty for the program. They hired Mark Miller one of their students who graduated in 1972 and Miller has been teaching at Cape Fear for 37 years now.

Miller remembers the program starting out as a maritime college with a military focus and mandatory uniforms. “By the late 60s ” he says “that clearly was not going to work. Young men were growing their hair long. They were in a rebellious state.”

By 1972 the program was housed on a 3-story barge tied up on the Cape Fear River. They taught classes and held shop on the barge until 1987.

“That was probably the worst teaching environment ” explains Miller “mainly because it had radiators that were always clanging and banging and no insulation so it was always either sweltering hot or freezing cold.”

Another major turning point for the program was the acquisition of the Dan Moore in 1982. Before that they used a larger ship the Advance II that could hold 75. Miller remembers epic voyages on that ship to South America Canada and the Caribbean. When fuel prices shot up in the late 1970s the Advance II which burned 80 gallons of fuel an hour became too expensive and the program had to scale back with the smaller Dan Moore. 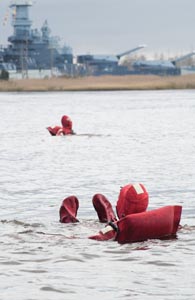 The most groundbreaking decision in the program’s history actually occurred just last year. With the economic recession high cost programs were on the chopping block to be cut from the state budget. Since it costs at least half a million dollars to operate the Dan Moore and pay faculty the program was vulnerable to losing its funding. Fortunately legislators in Raleigh heard the faculty’s cries appreciated the program’s real-world importance to the student body and were able to keep the program afloat.

Even though some might assume that after 37-plus years Miller’s job is old hat the technology is in a steady state of flux always improving. “There are times when I feel like a rookie ” Miller says. “The field is constantly changing and I have to evolve with it.” These days the Dan Moore is equipped with GPS (global positioning system) radar sonar and ROVs among many other technologies. Since the gear is used industry-wide Cape Fear alumni need less training than other hires might.

One of Miller’s former students Julep Gillman-Bryan who graduated in 1986 attributes her thriving 23-year career as a boat captain for the North Carolina Underwater Archaeology Branch to the initial experience she received at Cape Fear.

“I loved it ” Gillman-Bryan gushes. “It was almost like the program was just created for me. I try to stay in touch to see what’s going on and also to offer anything I can because I’m so grateful for what they gave me.”

Since 1996 Gillman-Bryan has been excavating artifacts from the Queen Anne’s Revenge which was commandeered by notorious English pirate Blackbeard and which sank in 1718. Each fall she’s part of a crew that goes to the shipwreck site near the Beaufort Inlet uncovering cannons anchors and even a box of tackle. Other artifacts include an apothecary’s mortar and pestle jewelry beads and of course gold dust.

Gillman-Bryan also teaches scuba diving and takes underwater photographs. “North Carolina diving is really beautiful ” she says. “We have ledges off the coast of Wilmington at Carolina Beach and Wrightsville Beach that have incredible aquatic life. Also we have shipwrecks and the organisms around them — sessile or attaching organisms that are very complex and ornate and colorful.”

Like many other CFCC marine technology alumni Gillman-Bryan acquired the practical skills necessary to work offshore and the confidence to market those qualifications and was hired right away — the day she graduated. Most importantly thanks to a program that has prepared and trained countless students for 45-plus years she’s traveled down a career path that still after 23 years isn’t just another 9-5 but instead holds great meaning and a sense accomplishment.