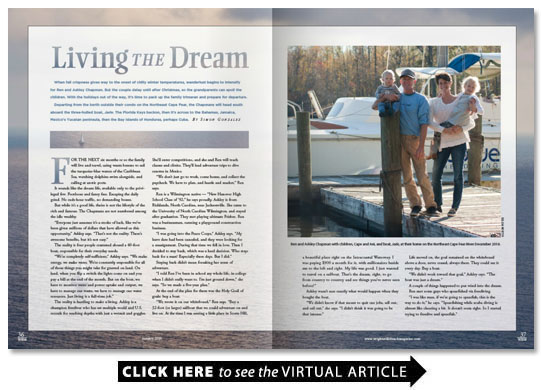 When fall crispness gives way to the onset of chilly winter temperatures wanderlust begins to intensify for Ren and Ashley Chapman. But the couple delay until after Christmas so the grandparents can spoil the children. With the holidays out of the way it’s time to pack up the family trimaran and prepare for departure.

Departing from the berth outside their condo on the Northeast Cape Fear the Chapmans will head south aboard the three-hulled boat Jade. The Florida Keys beckon then it’s across to the Bahamas Jamaica Mexico’s Yucatan peninsula then the Bay Islands of Honduras perhaps Cuba. For the next six months or so the family will live and travel using warm breezes to sail the turquoise-blue waters of the Caribbean Sea watching dolphins swim alongside and calling at exotic ports.

It sounds like the dream life available only to the privileged few. Footloose and fancy free. Escaping the daily grind. No rush-hour traffic no demanding bosses.

But while it’s a good life theirs is not the lifestyle of the rich and famous. The Chapmans are not numbered among the idle wealthy.

“Everyone just assumes it’s a stroke of luck like we’ve been given millions of dollars that have allowed us this opportunity ” Ashley says. “That’s not the reality. There’s awesome benefits but it’s not easy.”

The reality is four people crammed aboard a 40-foot boat responsible for their everyday needs.

“We’re completely self-sufficient ” Ashley says. “We make energy we make water. We’re constantly responsible for all of those things you might take for granted on land. On land when you flip a switch the lights come on and you pay a bill at the end of the month. But on the boat we have to monitor water and power uptake and output we have to manage our waste we have to manage our water resources. Just living is a full-time job.”

The reality is hustling to make a living. Ashley is a champion freediver who has set multiple world and U.S. records for reaching depths with just a wetsuit and goggles. She’ll enter competitions and she and Ren will teach classes and clinics. They’ll lead adventure trips to dive cenotes in Mexico.

“We don’t just go to work come home and collect the paycheck. We have to plan and hustle and market ” Ren says.

Ren is a Wilmington native — “New Hanover High School Class of ’92 ” he says proudly. Ashley is from Richlands North Carolina near Jacksonville. She came to the University of North Carolina Wilmington and stayed after graduation. They met playing ultimate Frisbee. Ren was a businessman running a playground construction business.

“I was going into the Peace Corps ” Ashley says. “My leave date had been canceled and they were looking for a reassignment. During that time we fell in love. Then I decided to stay back which was a hard decision. Who stays back for a man? Especially these days. But I did.”

Staying back didn’t mean forsaking her sense of adventure.

“I told Ren I’ve been in school my whole life in college when I didn’t really want to. I’m just ground down ” she says. “So we made a five-year plan.”

At the end of the plan for them was the Holy Grail of goals: buy a boat.

“We wrote it on our whiteboard ” Ren says. “Buy a 32-foot (or larger) sailboat that we could adventure on and live on. At the time I was renting a little place in Scotts Hill a beautiful place right on the Intracoastal Waterway. I was paying $900 a month for it with millionaires beside me to the left and right. My life was good. I just wanted to travel on a sailboat. That’s the dream right to go from country to country and see things you’ve never seen before?”

Ashley wasn’t sure exactly what would happen when they bought the boat.

“We didn’t know if that meant to quit our jobs sell out and sail out ” she says. “I didn’t think it was going to be that intense.”

Life moved on the goal remained on the whiteboard above a door never erased always there. They could see it every day. Buy a boat.

“We didn’t work toward that goal ” Ashley says. “The boat was just a dream.”

A couple of things happened to put wind into the dream.

Ren met some guys who spearfished via freediving.

“I was like man if we’re going to spearfish this is the way to do it ” he says. “Spearfishing while scuba diving is almost like cheating a bit. It doesn’t seem right. So I started trying to freedive and spearfish.”

He and a buddy went to Miami for a four-day class. Ren worked up to a 4-minute and 15-second breath hold but the ocean portion of the course was canceled because of weather. The following spring they went to the Cayman Islands with Ashley to complete the course.

“My buddy did 118 feet on a freedive. I did 121 feet. And Ashley did 122 feet ” Ren says. “She was the deepest person in the class. On her first freediving class which is very impressive.”

Especially considering Ashley didn’t really want to do it.

“I’m eight years younger than Ren ” she says. “When we were dating I didn’t realize that I could say ‘No that’s a terrible idea. I’m not jumping off the boat in the middle of the ocean holding my breath.’ In the class I remember being really intimidated because everyone had plenty of experience and had grown up on the water like Ren. I am also fairly competitive so I felt like quitting. But then I realized we had come a long way so I should just give it a try. And like Ren said by the end of it we killed it.”

So much so that at the end of the course an instructor told Ashley she had a lot of natural talent and should train with the U.S. team.

“I trained that summer and that brought me from 122 feet to 180 feet ” Ashley says. “I enjoyed the spearfishing and all that stuff but I really got addicted to the depth. How that felt.”

While Ashley was beginning to see a future in competitive freediving Ren realized his business wasn’t growing. He had survived the recession but was just treading water.

“Money was coming in but I was spending it on maintaining all this stuff I had ” he says.

Around Thanksgiving in 2010 — six years into the five-year plan — Ren and Ashley went to Merritt Island Florida and bought the boat.

“We motored it all the way back up to Wilmington ” Ren says. “I took the engine apart and pulled it out of the boat. I found another engine and put that in. We moved on it in July and by November we were leaving.”

The plan — to the extent there was a plan — included competing and teaching. But they weren’t looking too far beyond the horizon.

“I knew it was going to be hard so I said OK let me just try this for three solid months ” Ashley says. “If that works out let me try it for six months. I was giving myself an out in my head. That was just how I got through it. It’s a huge life change emotional and stressful.”

They married shortly before setting sail so Ren calls the first voyage “sort of a honeymoon cruise.” But in the back of their minds they knew it was a permanent change.

“We sold everything that we had ” he says. “All that equipment that I was using to make money I got rid of it. We pretty much jumped off the cliff.”

“We jumped off the cliff yes ” she says. “We didn’t leave any rope to climb back up. We didn’t have any rappelling gear. We just jumped and hoped there was water at the bottom.”

Seven years later the Chapmans have progressed from a honeymoon cruise to a family cruise with 5-year-old Ani and 1-year-old Cape aboard.

Ashley has gone from a promising freediving newcomer to an established veteran who has set three world records and 14 American marks. She hasn’t competed since giving birth to Cape but is aiming for another world record.

They are still hustling to make a living. While home in 2018 they continued to conduct freediving clinics and added children’s and babies’ swim classes. They purchased a classic wooden 34-foot Owens Express Cruiser called the Hope Lee and established a river cruise business on the Cape Fear.

They’ve gained wisdom and experience over the years. They know that the Bahamas is a great destination for competitions but it’s lacking in fresh food. Jamaica is a necessary next stop to “eat for a week” and to lay up on fresh fruit and produce. Protein however is never too far away when you are freediving spearfishermen.

“When you’re on a sailboat you can actually live very very inexpensively ” Ren says.

“Even though it’s harder in that way and much more physical than life on land it’s kind of nice when your responsibilities are distilled down to your basic needs ” Ashley says. “It’s a less confusing way to manage life I think.”