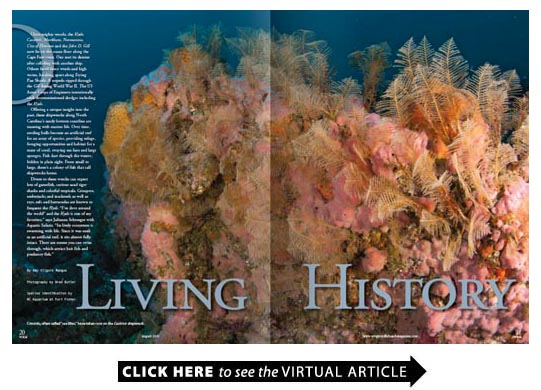 Once-mighty vessels the Hyde Cassimir Markham Normannia City of Houston and the John D. Gill now lie on the ocean floor along the Cape Fear coast. One met its demise after colliding with another ship. Others faced fierce winds and high waves breaking apart along Frying Pan Shoals. A torpedo ripped through the Gill during World War II. The US Army Corps of Engineers intentionally sank decommissioned dredges including the Hyde.

Offering a unique insight into the past these shipwrecks along North Carolinas sandy bottom coastline are teaming with marine life. Over time eroding hulls become an artificial reef for an array of species providing refuge foraging opportunities and habitat for a maze of coral swaying sea fans and large sponges. Fish dart through the waters hidden in plain sight. From small to large theres a colony of fish that call shipwrecks home.

Divers to these wrecks can expect lots of gamefish curious sand tiger sharks and colorful tropicals. Groupers amberjacks and mackerels as well as rays eels and barracudas are known to frequent the Hyde. Ive dove around the world and the Hyde is one of my favorites says Julianna Schroeger with Aquatic Safaris. Its lively ecosystem is swarming with life. Since it was sunk as an artificial reef it sits almost fully intact. There are rooms you can swim through which attract bait fish and predatory fish.

For the divers and researchers who visit shipwreck sites and the historians who study them today wreck sites provide the basis for a sensitive ecosystem of unbelievable diversity and beauty. Since shipwrecks serve as important habitats they benefit the environment and the local community.

There are two types of fish bony and cartilaginous. Ninety percent of the worlds fish species are bony. They vary in size by just a few millimeters.

– A filefishs spiny scales have a velvet or sandpaper feel thus the name filefish.

– If stood on its tail fin the Atlantic spadefishs body shape is similar to the spade found on a deck of playing cards hence its common name.

– Feather blennies have branching arms over their large eyes called cirri. Their eel-like bodies allow them to burrow within reefs.

– A type of grunt the tomtate plays an important role in the food chain it makes a good meal. When a larger fish is nearby tomtates tighten their school and move away from the predator.

– Mackerels also travel in schools and are fast-moving fish. Sharks follow mackerel bait balls charging them with an open mouth.

– Due to their small fins filefish arent great swimmers. They retreat into reef crevices when threatened.

–  An oyster toadfish may be ugly but its markings and colorations camouflage it from being consumed by sharks. Its disguise helps it capture food by lying in wait until prey wanders by. It can live in polluted water and even without water for up to 24 hours.

– In addition to the role they play in providing a habitat and food source for marine life artificial reefs like shipwrecks have also been used as a way to increase fisheries output. They provide a safe breeding habitat to increase the population of amberjacks spadefish black sea bass and barracudas.

– Large predatory fish such as groupers barracudas and snappers hide in shadowy crevices or feed in wide-open areas on the abundant supply of smaller fish and invertebrates on the reef.

– Barracudas have a well-deserved reputation as fierce hunters. What they lack in maneuverability they make up for it in short bursts of speed to overtake their prey.

– Flounders lie in the sandy bottom using their markings to camouflage them for protection and to ambush their prey. Interestingly at hatching a flounder has one eye on each side of its brain. As it grows from the larval to the juvenile stage one eye moves to the other side of its body in a stage called metamorphosis.

– Urchins are gardeners of the reef and graze on fast-growing algae.

– Sea stars are true carnivores eating mostly shelled creatures. They wrap themselves around prey using their tube feet to open the shell. From there they wrap their stomachs around the meat inside to devour it.

– Sea cucumbers feed on waste materials digging through the sediment for organic matter and particles. This also kicks up loose food and nutrients that are usable by nearby plants and organisms.

– The loggerhead sea turtle is one of the most widespread and most migratory of marine reptiles.

– Its carapace or top shell is heart shaped and covered with large scales or scutes that provide protection. The number and grouping of carapace scutes can be used to distinguish the different species of sea turtle.

– Loggerheads have five pairs of costal (along the side) scutes and two pairs of prefrontal (found above the eye) scutes.

– Loggerheads reach sexual maturity at around 35 years old. A female may nest three to five times in one breeding season returning to the same region where she hatched to breed every couple of years.

– Unlike their American relatives with claws Caribbean spiny lobsters have long whip-like antennae which are used in sensory perception and as an intimidation tactic. They use their large abdominal muscles and tail fan to rapidly propel them backwards and away from an advancing predator.

– A lobster can self amputate as a form of self defense. When an appendage is caught it can be severed and later regrown.

– Spiny lobsters venture out of crevices at night to feed on clams crabs blennies and sea urchins. Skates sharks octopi snappers and groupers are predators.

In the fall spiny lobsters engage in a migratory march single file to warmer deeper waters. These processions can be 100 lobsters long. Spiny lobsters are one of the few invertebrates able to truly migrate and may use the Earths magnetic field as a map.

– Southern stingrays and manta rays are cartilaginous or made completely of cartilage.

– They devour mollusks and crustaceans crushing their prey with their mouths.

– The southern stingray is ovoviviparous the pups hatch out of eggs while still inside the females reproductive system. She then delivers live pups.

– Despite their size manta rays feed on some of the smallest organisms in the water.

– They often jump completely out of the water to perhaps remove parasites as a form of communication or as a form of play.

– Sharks like sand tigers are the apex predator of a shipwreck reef feeding on the animals below them in the food chain.

– Their ragged teeth are still visible even when their mouths are closed but despite those teeth and vicious appearance sand tigers are rather docile.

– Their upper body is light brown to gray colored and gradually fades to white below. Juveniles have small yellowish-red or brownish spots scattered on the rear of their body and tail that fade with age.

– Sand tigers are the only known species to gulp air at the surface and store it in their stomachs to aid in buoyancy.

– They are also ovoviviparous or produce live young from eggs that hatch within the body. – The first pup to emerge feeds on the embryos of its siblings. This way only the strong survive.