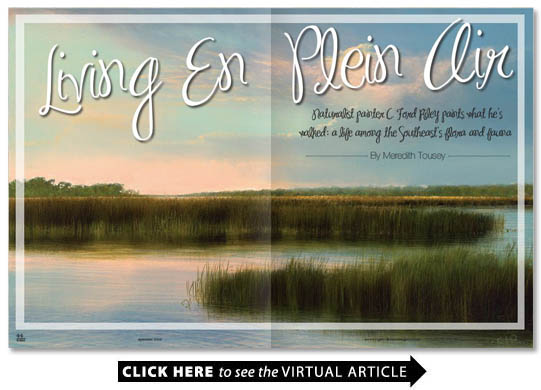 The tradition of painting landscapes en plein air is one of the most enduring approaches to the art form. Creating artwork en plein air translates from its French origin to mean in the open air the artist is literally working outdoors painting the scene on location.

So can one be an en plein air painter if he paints indoors inside
his studio?

By definition no. But Jacksonville Florida artist C. Ford Riley believes so with the important caveat that as the artist you Paint what you know. Know your subject. This approach would require intimate living knowledge of what you are painting and Ford says I paint only the things Im familiar with. If I cant smell it or feel it I cant conceivably paint it. When you know your subject he says painting direct to canvas is the same thing.

Ford Riley paints highly developed richly detailed pieces primarily in oil on canvas. His first body of work was of vignettes showing native southeastern birds (still his favorite subject) with a hint of their habitats foliage perhaps a single branch with a few leaves. These evolved as he became more interested in rendering the full habitat of his birds painting corner-to-corner he says then focusing eventually on the habitats details. The resulting lush landscape paintings mirror his reverence for the realistic and pastoral landscapes of the Hudson River School of painters a mid-19th century art movement. As in these paintings Fords connection to nature is illustrated.

Self-described as blessed with a photographic memory Fords ability to paint en plein air when not outside is therefore indebted to considerable time spent with his subject the flora and fauna that thrive on coasts in woodlands and in marshes of primarily north Florida and North Carolina. Fords knowledge of nature is born of doing of a life spent exploring hunting collecting and observing and as the list of actions goes on it includes sketching. Fords love of nature is paired with an inherent passion and talent for art and the sum of these actions has led to a successful career as an artist.

As his brother and both buyer and broker Scott Riley says Ford is gifted in his love for the wild and his ability to translate this into art has gained him a loyal following not only in Jacksonville but with high-profile clients beyond his hometown area. He has been
recognized in national and international competitions and his originals hang in galleries institutions and homes of prominent civic leaders executives and members of Congress. Seventy-five of these original pieces have been reprinted in limited editions through Stellers Gallery the Jacksonville gallery opened by Scott Riley in 1985 when he began to exclusively promote his brothers artwork.

The gallery now one of the longest-operating privately-owned galleries in the northeast Florida region is named after one of Fords first successful pieces a Stellers blue jay.

In describing his brothers work Scott uses the evocative language of one who was shaped by many of the same experiences at the waters edge on the sand and among mossy oaks and thick pines.

He paints what hes walked the roads hes walked down. His paintings smell like mud smell like salt air Scott says. This is not just the salt air of their native Jacksonville Florida that is infused into Fords pieces but also of Wrightsville Beach North Carolina where the Rileys spent many summers at family members homes (Boone and Blowing Rock North Carolina as well).

Both Rileys share impassioned recollections of their grandmothers circa 1934 home at No. 4 Channel Avenue on Banks Channel in Wrightsville Beach which Scott describes as a classic two-story shingled cottage with a wraparound porch where 20 to 30 family members would gather. Ford calls it the greatest house in the world.

Wrightsville Beach always had a fix on me says Ford recalling late 1950s and early 60s Wrightsville catching crabs underneath the stilt houses on the beach as the tide came up and longing to be with the older kids at Shooneys a popular teen hangout located across the street from their grandmothers Channel Avenue cottage. The Riley brothers mother Maureen OCrowley Riley was an artist too and their cousin Wilmington resident Mort Neblett says that she took lessons in the
mid-1940s with the successful Wilmington artist Claude Howell (1915-1997).
Ford says that as his mother took notice of his growing love of art she encouraged him to pursue it as a career.

I made a pact with her that I would reach my pinnacle he says.

As Ford matured as an artist and naturally looked at others art he found a likeminded viewpoint in the work of John Ruskin (1819-1900) a leading English art critic who argued that the principal role of the artist is truth to nature. Like many painters inclined toward the Ruskin view Ford renders his subject with such astute attention that at first glance his paintings could be perceived as a photograph. He believes in depicting the objects of nature as precisely as possible maintaining their integrity yet his approach employs textural brushwork and the use of optical color that is akin to Impressionism.

Ford continues his daily study and rendering of his natural subjects while Scott manages his career. The two have seen this working relationship bring Fords artwork much exposure and acclaim. Scott cites numerous experiences such as a commission by Florida Senator Bill Nelsons wife Grace to paint the Laura Bush Floribunda rose as a departing gift for her term as First Lady. Another born through work with interior designer Mandy Culpepper is the acquisition of a large collection of Fords work by media mogul Ted Turner for his Albany Georgia home. In fact when the Riley brothers recently delivered new pieces they say Turner remarked that his two favorite artists are Albert Bierstadt a celebrated 19th century German-American painter associated with the Hudson River School and known for his lavish landscapes of the American West and Ford Riley. This makes Ford his favorite living artist.

Scott Riley owns a second home on Airlie Road and spends increasing time there while Ford can be found in his picturesque studio in the Mandarin neighborhood near the St. Johns River his childhood home. Amid wooded acres full of the foliage and birds that eventually find themselves in his pieces Fords study is ongoing. This specific aesthetic experience is captured so directly on his canvasses that comparisons to other Southeastern artists and writers easily crystalize. Atlanta-born author Pat Conroy known for his works such as The Prince of Tides is one that Scott links with Fords paintings.

When I read Conroy I see Fords paintings Scott says. Conroy writes the South and Ford paints it.