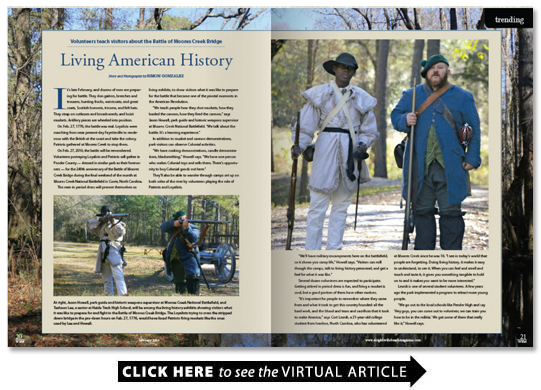 It’s late February and dozens of men are preparing for battle. They don gaiters breeches and trousers hunting frocks waistcoats and great coats Scottish bonnets tricorns and felt hats. They strap on cutlasses and broadswords and hoist muskets. Artillery pieces are wheeled into position.

On Feb. 27 1776 the battle was real. Loyalists were marching from near present-day Fayetteville to rendevous with the British at the coast and take the colony. Patriots gathered at Moores Creek to stop them.

On Feb. 27 2016 the battle will be remembered. Volunteers portraying Loyalists and Patriots will gather in Pender County — dressed in similar garb as their forerunners — for the 240th anniversary of the Battle of Moores Creek Bridge during the final weekend of the month at Moores Creek National Battlefield in Currie North Carolina.

The men in period dress will present themselves as living exhibits to show visitors what it was like to prepare for the battle that became one of the pivotal moments in the American Revolution.

“We teach people how they shot muskets how they loaded the cannon how they fired the cannon ” says Jason Howell park guide and historic weapons supervisor at Moores Creek National Battlefield. “We talk about the battle. It’s a learning experience.”

In addition to musket and cannon demonstrations park visitors can observe Colonial activities.

“We have cooking demonstrations candle demonstrations blacksmithing ” Howell says. “We have one person who makes Colonial toys and sells them. There’s opportunity to buy Colonial goods out here.”

They’ll also be able to wander through camps set up on both sides of the river by volunteers playing the role of Patriots and Loyalists.

“We’ll have military encampments here on the battlefield so it shows you camp life ” Howell says. “Visitors can mill though the camps talk to living history personnel and get a feel for what it was like.”

Several dozen volunteers are expected to participate. Getting attired in period dress is fun and firing a musket is cool but a good portion of them have other motives.

“It’s important for people to remember where they came from and what it took to get this country founded: all the hard work and the blood and tears and sacrifices that it took to make America ” says Cort Lesnik a 21-year-old college student from Ivanhoe North Carolina who has volunteered at Moores Creek since he was 16. “I see in today’s world that people are forgetting. Doing living history it makes it easy to understand to see it. When you can feel and smell and touch and taste it it gives you something tangible to hold on to and it makes you want to be more interested.”

Lesnik is one of several student volunteers. A few years ago the park implemented a program to attract more young people.

“We go out to the local schools like Pender High and say ‘Hey guys you can come out to volunteer we can train you how to be in the militia.’ We get some of them that really like it ” Howell says.

Teshaun Lee a senior at Heide Trask High School is one of them.

Lesnik Lee Howell and the rest of the living history exhibits will help visitors learn about the vital role the Battle of Moores Creek Bridge played in “America’s first civil war.”

“The British troops were supposed to supplement a Loyalist army ” Howell says. “That was the aim of the British to get the Loyalists to fight the war for them.”

Some 1 600 men most of them Highland Scots began to march to the coast. The Patriots marshaled a force of about 1 000 minutemen and militia members at Moores Creek determined to stop them. No regular British or American Continental troops would be involved.

“At this point we’re all British ” Howell says. “Here at Moores Creek this is North Carolinians fighting each other.”

“Creek” is somewhat of a misnomer. The water is several feet wide 10 feet deep in places and surrounded by a swamp. The only way to the other side was across the bridge.

The Patriots set up a decoy camp on the same side of the bridge as the approaching Loyalists but built a defensive earthwork on the other. In the predawn hours of February 27 they withdrew across the creek removed the bridge planks and greased the girders.

“The document that mentioned Mother Covington the exact wording is the Patriots from New Bern brought with them a smaller gun and a much larger cannon which they called Mother Covington ” Howell says. “The Wilmington minutemen brought three cannons according to some of the records. So there were probably three to five artillery pieces.”

It’s unclear exactly what happened when the Loyalists discovered the deserted camp and tried to cross Moores Creek. According to some accounts the battle was over within minutes. Howell isn’t so sure those accounts are correct.

“We’ve got a Loyalist diary from a guy who was at Moores Creek ” Howell says. “He said they attacked and were repelled. They fell back and regrouped and then they tried to come over the bridge again. The cannons kept them from coming across. They did this three times.”

One thing is certain the Battle of Moores Creek Bridge was a tremendous victory for the Patriots and provided impetus for independence. Less than two months later on April 12 the Fourth Provincial Congress of North Carolina met at Halifax and adopted a resolution calling for independence.

“The aftermath of the battle was the important thing ” Howell says. “Without Feb. 27 we wouldn’t have had April 12. Without April 12 a lot of historians argue we wouldn’t have had a Declaration of Independence. In many ways you could say North Carolina got the ball rolling in the right direction.”