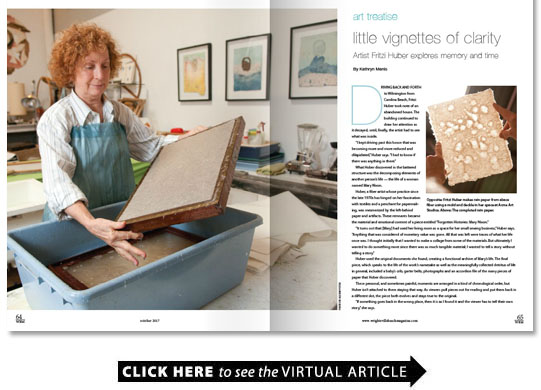 Driving back and forth to Wilmington from Carolina Beach Fritzi Huber took note of an abandoned house. The building continued to draw her attention as it decayed until finally the artist had to see what was inside.

“I kept driving past this house that was becoming more and more reduced and dilapidated ” Huber says. “I had to know if there was anything in there.”

What Huber discovered in the battered structure was the decomposing elements of another person’s life — the life of a woman named Mary Nixon. Huber a fiber artist whose practice since the late 1970s has hinged on her fascination with textiles and a penchant for papermaking was mesmerized by the left-behind paper and artifacts. These remnants became the material and emotional content of a piece entitled “Forgotten Histories: Mary Nixon.” “It turns out that [Mary] had used her living room as a space for her small sewing business ” Huber says. “Anything that was considered of monetary value was gone. All that was left were traces of what her life once was. I thought initially that I wanted to make a collage from some of the materials. But ultimately I wanted to do something more since there was so much tangible material; I wanted to tell a story without telling a story.”

Huber used the original documents she found creating a functional archive of Mary’s life. The final piece which speaks to the life of the work’s namesake as well as the meaningfully collected detritus of life in general included a baby’s crib garter belts photographs and an accordion file of the many pieces of paper that Huber discovered. These personal and sometimes painful moments are arranged in a kind of chronological order but Huber isn’t attached to them staying that way. As viewers pull pieces out for reading and put them back in a different slot the piece both evolves and stays true to the original.

“If something goes back in the wrong place then it is as I found it and the viewer has to tell their own story ” she says.

Time textile and memory are intertwining influences throughout Huber’s practice. She does not shy away from the vulnerability of human intimacy. In a piece titled “Momma Told Me Not to Come ” Huber lays three generations of her family’s lingerie on top of textiles resembling a bedspread or quilt the same size and shape of a double bed.

“The pieces are splayed out like skin because that is how we wear it ” she says.

This composition recalls the pattern and domestic ethos of a quilt as the undergarments blend deceptively with the other fabric. By displaying items worn privately even when in public Huber juxtaposes female sexuality with feminine domesticity highlighting the contrasting public and private ways in which women’s lives are categorized and defined. This gesture has the interesting effect of both increasing and reducing the private quality of the garments. Huber says that her fascination with time and textiles arose in her youth when she spent a substantial amount of time on the road with her family’s European-style circus. In part this was influenced by her active participation in creating costumes beginning in early childhood. But she has always thought of herself as an artist part of an entire family of artists. As a part-time nomad Huber developed an intense appreciation for both water and books — things hard to come by on the road.

Known for her skill in creating handmade paper through a variety of difficult and innovative techniques Huber describes her first attempt at papermaking plunging her hands into the vat of water and fibers as serendipitous.

“I felt so fulfilled every time I put my hands in that wet slurry ” she recalls. “It’s so soothing and meditative but the reason that it felt like that to me is because water is such a precious commodity on the road. All of my work is about water first and foremost. The second part is that being on the road months out of the year we couldn’t haul books around with us or have a library card. So when I’d finally get one I’d check out as many books as I could. I’d sleep with them open them and smell them. When I chose books I’d close my eyes and breathe in. The ones I picked were always the ones that were handmade. They have a special aroma. Paper via the book format and paper itself were and are very desirable and attractive things to me.”

In a sophisticated mixed-media piece entitled “The Pink Room ” Huber’s unique life experiences and insightful interest in books and the various ways we record human culture overlap. This piece is constructed inside a small pink box resembling a miniature vanity table complete with two drawers and a small square mirror. Inside the drawers Huber has added several pieces of delicately made white paper. These pages feature copied images adhered by chine-coll� — a printing process that allows different textures and colors of paper to be bonded together rather than glued as in collage.

Huber uses the process to fuse idyllic images of 1940s U.S. culture images from her own unique childhood — her “boring circus life” — and poetic explanatory text with the freshly made paper. Similar to fresco-secco painting where pigments are applied to still-wet plaster the fibers and images are cemented together as the paper and ink dry. The result is a comfortable beautiful contrast highlighting the variation of human experience and the limitations in how we understand difference. Images of wholesome Americans in cookie-cutter domestic spaces coexist with high-flying trapeze artists inside a nostalgically painted box.

“What it really addresses is how little we understand other cultures that we live with ” Huber explains. “And it highlights the fact that what may seem exotic to some is not exotic to others.”

“The Pink Room” showcases Huber’s brilliant subtlety and her skill in connecting paper and papermaking to a broad range of concepts. Each work in her studio space overflows with emotion and is pregnant with experiential knowledge; her use of soft lines muted color palettes and delicate textures entice the viewer to meditation. Only occasionally working representationally Huber’s pieces speak volumes without needing to literally speak. Huber moved to Wilmington from her long-time home in California in 1987. She quickly made friends in the expanding art scene joined the group of teachers at DREAMS of Wilmington and became part of the group of artists at Acme Studios in downtown Wilmington. She continues to teach with DREAMS and recently spearheaded the memorial exhibition for Rick Hobbs an Acme co-founder beloved Wilmingtonian and talented painter and sculptor. The show which opened July 28 bears the mark of Huber’s insightful eye and interest in the complexity and subtlety of human experience.

Huber has a unique way of thinking about her work and its development which parallels her observations about memory and time. She describes herself and her practice as circularly evolving. Images experiences and projects run into and out of one another rather than following linearly from one to the next. The shade of pink that Huber chose for “The Pink Room ” for example was a slightly muted version of what she found on the walls of Mary Nixon’s home and she consistently works on three to five different pieces at a time. “Lately I find that I’m playing with something from the past running into the present ” she says. “And I don’t think of myself as dictating to the surface but as collaborating with it. There are multiple parts of my mind thinking at once and when I’m not sure what to do next I decide to just paint and see what happens. My work represents how in memory we have really clear visions and really vague visions. When we put them together they give us impressions of what was or could have been but we can’t see the whole precise image — just little vignettes of clarity.”

In an innocuous corner of Huber’s studio hangs a personal totem created for participation in a friend’s themed show. It’s covered in images of sea snails called Xenophora. These perplexing creatures are colloquially known as “shell-collecting shells” for their tendency to grab hold of objects they encounter and attach them to their own shells as they grow. In the images Huber has collected Xenophora have adorned themselves with smaller shells bits of coral and rock and pieces of glass some in winding logical patterns and others haphazardly piling object on top of object in crushing volume. Huber delights in this inexplicable impulse to collect and decorate and describes her discovery of the unique animal with contagious enthusiasm. The Xenophora she explains provide a humorous but elegant metaphor for human memory. We collect images experiences connections and memories as we go and attach them to ourselves in patterns that can only make sense to us.

Fritzi Huber’s works in handmade paper and paint explore the nuances of memory and time employing graceful insight into the human condition and a delicate but clear point of view. Her works are playful nostalgic and comfortingly beautiful while connecting viewers to moments or emotions they might not have accessed in a while.