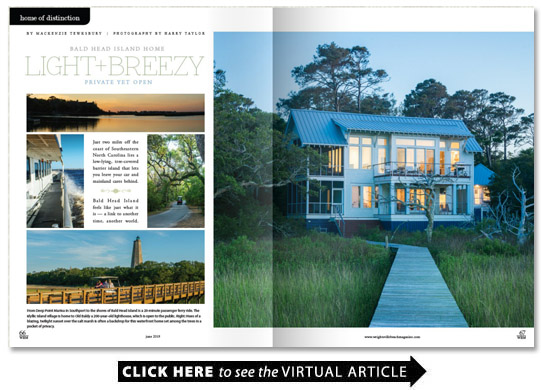 Just two miles off the coast of Southeastern North Carolina lies a low-lying tree-covered barrier island that lets you leave your car and mainland cares behind.

Bald Head Island feels like just what it is — a link to another time another world.

Historically known as Smith Island home of the oldest lighthouse in North Carolina “Old Baldy ” the island is secluded and feels remote situated where the Cape Fear River meets the Atlantic Ocean — and while it’s barely two miles from Southport it feels like it might as well be 2 000.

The 20-minute passenger ferry ride leads you into a unique blend of beachfronts marsh and maritime forest that makes up the village. There are few cars on the island residents and visitors use modified electric golf carts and bicycles or walk.

With a club golf restaurants shops island market a bustling marina and plenty of other amenities the village is home only to about 200 full-time residents but welcomes a variety of business folk day-trippers and a good number of second-home owners and vacationers on any given day. It’s friendly. People say hi to one another as they pass in golf carts along shaded roadways under the lush tree canopy.

Katherine and Todd Delaney owners of Cape Fear Design and Build found this island oasis more than 20 years ago. The couple have made their living building and rebuilding homes here.

Right off the ferry Katherine hops in her all-black cart and drives beneath live and laurel oaks red cedar and American holly before turning onto Widgeon Court in Creek Estates a house the Delaneys with architect Peter Quinn have been building for the past year.

The road canopied and dappled in sunlight opens up just enough to make way for a light and breezy two-bedroom home and a crofter — Bald Head Island’s name for a guest house above the garage — surrounded by greenery and a strikingly still and quiet salt marsh.

After a quick walk up the front porch one is immediately welcomed into a cozy yet open space space that contrasts the exterior — inside the home everything feels open and breezy. Outside everything feels secluded.

Quinn knows the real treat is on the top floor so he is quick to turn your attention upward.

“When you’re looking at an upside-down house like this one we have two things going on: you don’t want people coming into a cave and you have got to get people looking up; they have to be invited upstairs ” Quinn says. “Between the light and the stair rail that’s what is going on.”

The stair railing black and sea-like is impossible to miss. It is a custom piece done by R. Mended Metals in Wilmington a husband-and-wife duo who design with a style inspired by the ocean making it perfect for this home as it captures the more modern look while retaining just a touch of coastal.

The upstairs mimics the openness of the front entrance with an entire back wall of floor-length windowed doors that let the kitchen and living space bask in sunlight providing just a small taste of the salt marsh outside. The doors open up to a back porch giving way to a somehow even more serene view of the long dock salt marsh and local wildlife. “It’s like looking at a living picture ” Todd says.

But while the interior is flooded with natural light the surrounding trees and greenery enclose the space making it feel private and also cool.

“We’re in the heat of the day and you don’t have sun pouring into this house but we don’t have any lights on either ” Peter says.

The kitchen seamlessly pairs white wooden shiplap walls and ashy wood-textured cabinets that make them look more like walls than what they really are: a refrigerator a pantry and a bathroom. Peter said they used the original footprint of the original house which made it difficult to position things while still keeping the sleek unified look. His solution? Make all of it built in.

The shiplap continues throughout the interior into the dining and living space giving it that comfortable Bald Head Island feel with a little bit of the homeowner’s personal style.

“This isn’t normal Bald Head finishes ” Pete said. “The shiplap is pretty normal but when you put this kind of window and that kind of cabinet the shiplap kind of fades away and it becomes very modern-looking.”

The dining and living space remain open and light and hues of tans blues greens and whites — almost the same colors found just outside the home — carry throughout the furniture walls and floorings. All of the furniture finishes and artwork were handpicked by the homeowner with only a touch of feedback from Quinn Katherine and Todd.

“I was just a liaison ” Katherine said. “She knew what she wanted and had exquisite taste.”

“It was easy to give her feedback ” Peter added.

Back downstairs natural light flows into the shared living space and master and guest bedrooms. The colors remain consistent — the light and airy look of the whites tans blues and greens make the house feel unified and coherent. The living space overlooks the marsh and is sandwiched between the two bedrooms but the space feels fluid as it is only separated by two sliding barn-like doors with the same texture as the cabinets upstairs.

The rooms each carry the same warm tones as the rest of the house. The master bedroom is connected to a screened-in porch with another breathtaking view of the water and a blue bed hanging from rope. The bathrooms mirror the kitchen: sleek white appliances built-in cabinets and Southeastern tiles.

Out on the water the air feels salty but clear. Paddle boarders passing by are not uncommon and the dock offers a special type of relaxation that is likely only found on the water.

Or perhaps on an island.