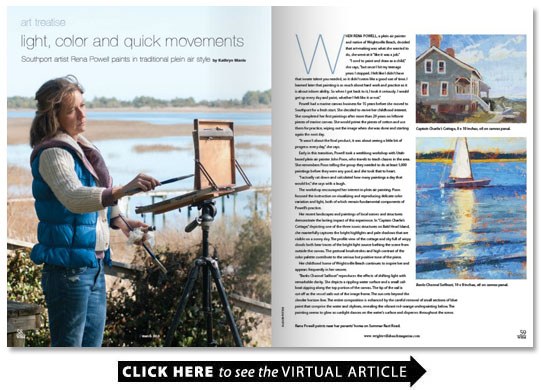 When Rena Powell a plein air painter and native of Wrightsville Beach decided that art-making was what she wanted to do she went at it “like it was a job.”

“I used to paint and draw as a child ” she says “but once I hit my teenage years I stopped. I felt like I didn’t have that innate talent you needed so it didn’t seem like a good use of time. I learned later that painting is as much about hard work and practice as it is about inborn ability. So when I got back to it I took it seriously. I would get up every day and paint whether I felt like it or not.”

Powell had a marine canvas business for 15 years before she moved to Southport for a fresh start. She decided to revive her childhood interest. She completed her first paintings after more than 20 years on leftover pieces of marine canvas. She would prime the pieces of cotton and use them for practice wiping out the image when she was done and starting again the next day.

“It wasn’t about the final product it was about seeing a little bit of progress every day ” she says.

Early in this transition Powell took a weeklong workshop with Utah-based plein air painter John Poon who travels to teach classes in the area. She remembers Poon telling the group they needed to do at least 1 000 paintings before they were any good and she took that to heart.

“I actually sat down and calculated how many paintings a day that would be ” she says with a laugh.

The workshop encouraged her interest in plein air painting. Poon focused the instruction on visualizing and reproducing delicate color variation and light both of which remain fundamental components of Powell’s practice.

Her recent landscapes and paintings of local scenes and structures demonstrate the lasting impact of this experience. In “Captain Charlie’s Cottage ” depicting one of the three iconic structures on Bald Head Island she masterfully captures the bright highlights and pale shadows that are visible on a sunny day. The profile view of the cottage and sky full of wispy clouds both bear traces of the bright light source bathing the scene from outside the canvas. The gestural brushstrokes and high contrast of the color palette contribute to the serious but positive tone of the piece.

Her childhood home of Wrightsville Beach continues to inspire her and appears frequently in her oeuvre.

“Banks Channel Sailboat” reproduces the effects of shifting light with remarkable clarity. She depicts a rippling water surface and a small sailboat zipping along the top portion of the canvas. The tip of the sail is cut off as the vessel sails out of the image frame. The sun sets beyond the slender horizon line. The entire composition is enhanced by the careful removal of small sections of blue paint that comprise the water and skylines revealing the vibrant red-orange underpainting below. The painting seems to glow as sunlight dances on the water’s surface and disperses throughout the scene.

“I usually start with an underpainting and often add a quick sketch of the scene in an earth tone ” she says. “I build up from there getting the colors to look exactly as I’m seeing them. That’s the amazing thing about plein air: you can truly capture color from real life. But it changes so fast so I need to get color points down immediately; details can come later if I have to finish in the studio.”

Chief among Powell’s motivations is her young daughter Maebel. The two raise chickens at their home in Southport and have rarely been separated in the seven years since the child was born.

Powell was gaining traction in her art career showing her work in local galleries and making big strides in her technical ability when she learned that she was expecting. After her daughter’s arrival Powell’s priorities and perspective changed.

“Everything came to a screeching halt ” she says. “I wanted to spend as much time with my daughter as possible since I won’t ever get this time back. And that balance continues to be something that is difficult for me; she’s the most important thing.”

Powell’s most recent paintings have a palpably emotional and often maternal quality. The artist’s whimsical brushstrokes muted and simple color palettes and choice of small intimate canvases create a feeling of warmth and care that is subtle but pervasive.

In particular her portraits of horses demonstrate her ability to imbue her subjects with a protective and loving energy.

When Maebel was not yet 2 the small family moved to Beaufort North Carolina. They were only there for a few years but it was an isolating experience.

“I didn’t know anyone there; it was a very lonely time and I felt lost ” she says.

Boat rides out to Shackleford Banks provided a kind of solace. The small barrier island part of the Cape Lookout National Seashore is famously home to about 100 wild ponies. Powell felt an instant sense of companionship with the majestic animals and made several trips to see them.

“I could see the wild ponies from the shore on Carrot Island and I was fascinated with them ” she says. “I started taking boat rides out to Shackleford Banks to take pictures and kept them in the back of my mind even after we left. I felt drawn to them — they were displaced and I felt displaced. Those lone solitary figures out there were so beautiful and I knew I wanted to paint them.”

The connection Powell felt to the beautiful animals continues to inspire her art. Her ongoing depictions of them spurred by an intensive horse-painting workshop in Colorado are mostly portraits of a solitary horse often on an abstracted surface. Brightly colored and roughly hewn backgrounds developed on her characteristically small canvases produce an emotional tension between wild and intimate vibrant but contained.

She employs a “broken color” technique in these and other paintings breaking up what would be large swaths of color with heavily individualized brushstrokes. This technique was originally developed by the Impressionists as a way of depicting light dispersal and along with Powell’s strategic use of underpainting contributes to the emotion and temporal atmosphere of her signature style.

Carrot Island Pony” depicts a wild pony from a foreshortened perspective placing the viewer directly in front of the animal. It lowers its head and walks forward one hoof in the air as the wind picks up its mane and tail. Powell uses broken color to develop the surrounding scene in a vibrant mix of greens yellows and blues. She achieves an impressive amount of kinetic energy in this simple composition.

While “Carrot Island Pony” is full of movement and places its subject in a detailed outdoor space “Outer Banks Pony” represents the iconic animal in profile focusing on the shape and contours of the creature’s body and isolating it inside a flatly painted backdrop. The pony is heavily impressionistic and Powell’s clever layering of paint and flattening of picture planes creates an illusion that the pony is materializing from within the pale blue-green surface.

“Horse Study” depicts another pony in profile combining movement and anatomical accuracy as it slowly walks forward. Focusing on the rippling of its muscles and subtle swishing of its tail as it moves the piece demonstrates Powell’s robust technical ability.

In an effort to have a more ecological practice Powell frames these and other paintings in reclaimed wood. Some are even made from reclaimed lumber from an old cotton mill in Rutherfordton North Carolina adding another dimension of the personal and local to her pieces.

Seeing her paintings is an intimate and precious experience and one can’t help but recall the adage about artists pouring tiny pieces of themselves into their work. The connection between artist and subject is visceral in Powell’s practice and she doesn’t shy away from sharing that with audiences.

“I want to capture things that I see and that I find beautiful and express that beauty in a way that touches people ” she says.