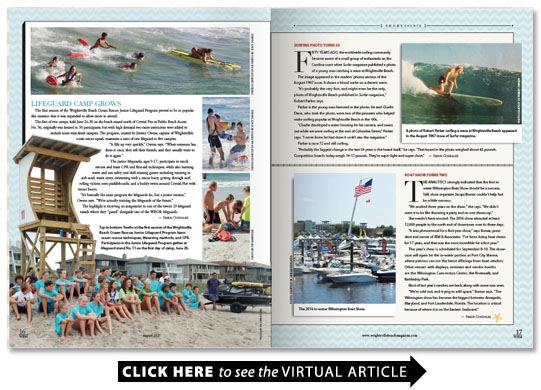 The first session of the Wrightsville Beach Ocean Rescue Junior Lifeguard Program proved to be so popular this summer that it was expanded to allow more to attend.

The first of two camps held June 26-30 on the beach strand north of Crystal Pier at Public Beach Access No. 36 originally was limited to 30 participants but with high demand two more instructors were added to include some wait-listed campers. The program created by Jeremy Owens captain of Wrightsville’s ocean rescue squad maintains a ratio of one lifeguard to five campers.

“It fills up very quickly ” Owens says. “When someone has done it once they tell their friends and they usually want to do it again.”

The junior lifeguards ages 9-17 participate in mock rescues and learn CPR and first-aid techniques while also learning water and sun safety and skill-training games including running in soft sand water entry swimming with a rescue buoy getting through surf rolling victims onto paddleboards and a buddy swim around Crystal Pier with rescue buoys.

The highlight is receiving an assignment to one of the town’s 23 lifeguard stands where they “guard” alongside one of the WBOR lifeguards.

Fifty years ago the worldwide surfing community became aware of a small group of enthusiasts on the Carolina coast when Surfer magazine published a photo of a young man catching a wave at Wrightsville Beach.

The image appeared in the readers’ photos section of the August 1967 issue. It shows a blond surfer on a decent wave.

“It’s probably the very first and might even be the only photo of Wrightsville Beach published in Surfer magazine ” Robert Parker says.

Parker is the young man featured in the photo. He and Charlie Davis who took the photo were two of the pioneers who helped make surfing popular at Wrightsville Beach in the ’60s.

“Charlie developed a water housing for his camera and swam out while we were surfing at the end of Columbia Street ” Parker says. “I never knew he had done it until I saw the magazine.”

Parker is now 72 and still surfing.

“Probably the biggest change in the last 50 years is the board itself ” he says. “That board in the photo weighed about 45 pounds. Competition boards today weigh 10-17 pounds. They’re super light and super short.”

The analytics strongly indicated that the first in-water Wilmington Boat Show should be a success. Still show organizer Jacqui Bomar couldn’t help but be a little nervous.

“We worked three years on the show ” she says. “We didn’t want it to be like throwing a party and no one shows up.”

She needn’t have worried. The 2016 show attracted at least 12 000 people to the north end of downtown over its three days.

“It was phenomenal for a first-year show ” says Bomar president and owner of JBM & Associates. “I’ve been doing boat shows for 17 years and that was the most incredible for a first year.”

This year’s show is scheduled for September 8-10. The showcase will again be the in-water portion at Port City Marina where patrons can see the latest offerings from boat vendors. Other venues with displays seminars and vendor booths are the Wilmington Convention Center the Riverwalk and Battleship Park.

Most of last year’s vendors are back along with some new ones.

“We’re sold out and trying to add space ” Bomar says. “The Wilmington show has become the biggest between Annapolis Maryland and Fort Lauderdale Florida. The location is critical because of where it is on the Eastern Seaboard.”