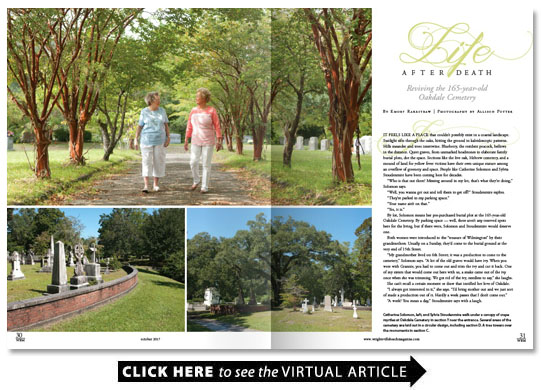 It feels like a place that couldn’t possibly exist in a coastal landscape. Sunlight sifts through the oaks hitting the ground in kaleidoscopic patterns. Hills meander and trees intertwine. Blueberry the resident peacock bellows in the distance. Quiet graves from unmarked headstones to elaborate family burial plots dot the space. Sections like the live oak Hebrew cemetery and a mound of land for yellow fever victims have their own unique stature among an overflow of greenery and space. People like Catherine Solomon and Sylvia Stoudenmire have been coming here for decades.

“Who is that out there? Messing around in my lot that’s what they’re doing ” Solomon says.

“Well you wanna get out and tell them to get off?” Stoudenmire replies.

“They’re parked in my parking space.”

By lot Solomon means her pre-purchased burial plot at the 165-year-old Oakdale Cemetery. By parking space — well there aren’t any reserved spots here for the living but if there were Solomon and Stoudenmire would deserve one.

Both women were introduced to the “treasure of Wilmington” by their grandmothers. Usually on a Sunday they’d come to the burial ground at the very end of 15th Street.

“My grandmother lived on 6th Street; it was a production to come to the cemetery ” Solomon says. “A lot of the old graves would have ivy. When you were with Grannie you had to come out and trim the ivy and cut it back. One of my sisters that would come out here with us a snake came out of the ivy once when she was trimming. We got rid of the ivy needless to say ” she laughs.

She can’t recall a certain moment or draw that instilled her love of Oakdale.

“I always got interested in it ” she says. “I’d bring mother out and we just sort of made a production out of it. Hardly a week passes that I don’t come out.”

“A week? You mean a day ” Stoudenmire says with a laugh.

Many more than Stoudenmire and Solomon are tied to these 100 historic acres in Wilmington. Generations have ventured to North Carolina’s first rural cemetery chartered in 1852 to feel the presence of life after death.

The aura and scenery intertwine with a solemn stillness. A person walking through might believe he or she has entered a secret garden from the 19th century — until a car drives past a reminder that it’s actually 2017.

Stoudenmire is now a great-grandmother and Solomon suffers from knee problems preventing her from longer walks but they still come regularly. Their dedication to Oakdale is unmatched almost ingrained. The ladies drive around in Stoudenmire’s car with hedge trimmers in tow. If there’s a wayward bush they take care of it.

“We ride around with clippers and if we see something coming out of the bushes we get out and clip it. Catherine will say ‘Hit the brake!'” Stoudenmire says.

They also contribute to management. Solomon served on the Oakdale Board of Directors for more than 30 years many of those as president. During most of her time she was the only female. She met Stoudenmire during the transition from the Oakdale board to Friends of Oakdale a nonprofit founded in 2005 to preserve and promote the historical character of the cemetery.

Solomon was president in 1990 when the board launched a campaign that raised more than $500 000. Now a new campaign seeks to raise $1.9 million and breathe life into a place dedicated to honoring the dead.

Local businessman Bert Williams is spearheading the effort. Williams has five generations of family buried at Oakdale. He hopes the campaign will restore the cemetery to its former glory and re-establish why it is so special not just to Solomon and Stoudenmire but the entire city.

“It’s more than a cemetery ” Williams says. “It’s a garden. It’s a creek that runs through where a peacock hangs out and people come out to bird watch ghost walk study the history. Schools come out here. It’s the most cherished treasure in this town.”

Over the years both nature and humans have contributed to reducing the beauty. Small projects like environmental upgrades garden and monument restoration and reforestation as well as new public trails facilities and a visitor’s center have helped restore Oakdale. But more improvements are needed.

Funds raised through the campaign will be used for additional repairs and restoration environmental preservation new columbaria and cremation gardens an endowment to ensure long-term preservation and expanded tourism and educational events.

The last item is important to Williams and Oakdale superintendent Eric Kozen who are pushing for more public awareness. Ask a younger generation of Wilmington residents their knowledge on Oakdale and many respond with the question “The one at the end of 15th Street?” Or “I didn’t know you could walk through there.”

Older generations many with lineage to the city and cemetery know that Oakdale is essentially Wilmington’s history book.

“Old cemeteries are mirrors of the past ” Kozen says. “You can learn a lot of interesting information what the traditions were the families. It’s a snapshot of time time stands still in cemeteries. We are a major repository of folks that have done amazing things. People always ask me ‘Who are the famous people that are buried here?’ I tell them it’s all of them because we’ve all made some sort of sacrifice to the community we live in.”

Cemeteries are like a storybook and Oakdale has no shortage of chapters. There’s an old headstone close to the annex bridge with the word “Nance ” barely legible from salt rain and the passage of time. It belongs to a young woman who died at sea. Her father knowing the voyage back to Wilmington would be at least five days tied her to a chair and preserved her body in a cask of alcohol. Today she rests beneath the ground of Oakdale still in the cask.

While Nance is the case of a nondescript grave with a fascinating backstory many travel to Oakdale seeking the “famous” plots. Those include Edward Dudley North Carolina’s first popularly elected governor; Ruth Faison Shaw the inventor of finger painting; Henry Bacon the Lincoln Memorial architect; and of course notable Wilmington families like the Bellamys MacRaes and Camerons.

There’s also a headstone that reads “Our Little Annie ” with a lamb lying on top. It marks the grave of 6-year-old Annie DeRosset the first interment on Feb. 5 1855. Her father was physician Armand John DeRosset Oakdale’s first president.

Williams leads a couple of visitors to his family’s plot.

“Had I known we were coming over here I’d have brought the lawnmower out ” he laughs.

Yet when approaching the graves some worn some new things become somber. Williams’ son Harper was buried here following a fatal motor vehicle accident after his first semester at University of North Carolina Chapel Hill. Williams’ sister whose life was taken by cancer is also here.

The plot also gives a hint about the family’s unique history. Two of the gravestones bear the same birth date.

Friends of Oakdale wants to educate the public about the stories and the opportunities to peek inside Wilmington’s history. The group offers various tours including a horticulture tour World War I historical tour angel tour mausoleums tour summer walking tours held every month from May through October and the popular flashlight tour from 7:30-9:30 p.m.

For almost every tour Stoudenmire and Solomon are there to take tickets hand out water bottles and even follow the group in a golf cart in case someone gets overheated which Stoudenmire says has happened. Although Oakdale has around 100 burials each year most who attend the tour are shocked to find out it’s still an active cemetery.

“One man came up when he bought a ticket and asked ‘Is this still an active cemetery?’ And I said ‘Yes sir would you like to a buy a lot?’ He laughed and said ‘not right now ‘” Solomon says.

While Wilmington sees a flock of tourists each summer many on the tours are locals.

“When people come out of Oakdale nine out of 10 times I hear one word ‘Wow ‘ because they did not realize how beautiful a cemetery can be ” Kozen says. “We are two things at once: an arboretum and a museum. People come back and want to do more and spend a lot of time here. Even the mayor of our town comes in here from time to time to get peace. It serves a much larger purpose for a lot of different individuals.”

Kozen came to Oakdale from Arlington National Cemetery and has a background in horticulture. A cemetery is a place where each headstone acknowledges a death but to him Oakdale is alive in the majestic trees blooming flowers chirping birds and possibly in the (rumored) black bear. There’s the bubbling Burnt Mill Creek and Photinia glabra which Kozen says is the “oldest shrub in Wilmington.”

Put simply Oakdale is a horticulturist’s dream and Kozen has now identified hundreds of tree and plant species in the 100 acres. One major push in the campaign is preserving the nature found here.

“When I was younger one thing we always did (and I try to do now) is come out when the dogwoods are blooming. It was unbelievable you could look and all you’d see were white blooms ” Williams says. “Now the dogwoods are dying. You come in now and there’s still dogwoods but not like it was. That’s the most exciting part of this campaign to replant trees.”

For Stoudenmire it’s the crepe myrtles that are meaningful. Her family has planted more than 200 in the grounds including a lined row near her family’s plot a nod to her mother who loved the flowering trees.

From crepe myrtles dogwoods and mountain laurel to live oaks and towering pines Oakdale is a nature preserve. And it’s so much more. Stoudenmire and Solomon hope others will discover the same comfort and refuge they have found here the same ties to the land and lineage the same escape of time and place.

As Kozen says time stands still in cemeteries. There are fixed dates on headstones that speak to the past. But he Williams Stoudenmire and Solomon also view Oakdale as a place that offers a chance to witness life after death and give hope for the future.

“There’s history in our buildings and up and down our river but there’s no better history than walking down these lanes ” Williams says. “It shows the respect of nature family connections it’s the people that make a community and it’s meshed with history and nature and there’s no better place anywhere in this area than right there.”