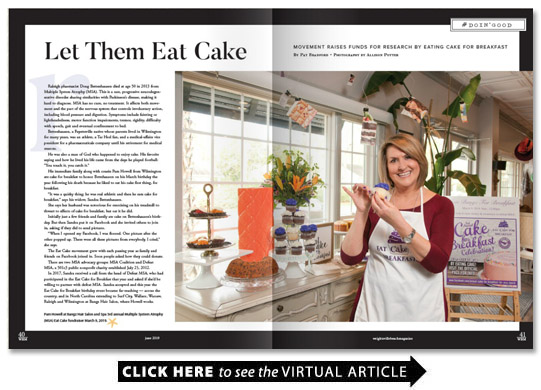 Raleigh pharmacist Doug Bettenhausen died at age 50 in 2013 from Multiple System Atrophy (MSA). This is a rare progressive neurodegenerative disorder sharing similarities with Parkinson’s disease making it hard to diagnose. MSA has no cure no treatment. It affects both movement and the part of the nervous system that controls involuntary action including blood pressure and digestion. Symptoms include fainting or lightheadedness motor function impairments tremor rigidity difficulty with speech gait and eventual confinement to bed.

Bettenhausen a Fayetteville native whose parents lived in Wilmington for many years was an athlete a Tar Heel fan and a medical-affairs vice president for a pharmaceuticals company until his retirement for medical reasons.

He was also a man of God who happened to enjoy cake. His favorite saying and how he lived his life came from the days he played football: “You touch it you catch it.”

His immediate family along with cousin Pam Howell from Wilmington ate cake for breakfast to honor Bettehausen on his March birthday the year following his death because he liked to eat his cake first thing for breakfast.

“It was a quirky thing; he was real athletic and then he eats cake for breakfast ” says his widow Sandra Bettenhausen.

She says her husband was notorious for exercising on his treadmill to thwart to effects of cake for breakfast but eat it he did.

Initially just a few friends and family ate cake on Bettenhausen’s birthday. But then Sandra put it on Facebook and she invited others to join in asking if they did to send pictures.

“When I opened my Facebook I was floored. One picture after the other popped up. There were all these pictures from everybody. I cried ” she says.

The Eat Cake movement grew with each passing year as family and friends on Facebook joined in. Soon people asked how they could donate.

In 2017 Sandra received a call from the head of Defeat MSA who had participated in the Eat Cake for Breakfast that year and asked if she’d be willing to partner with defeat MSA. Sandra accepted and this year the Eat Cake for Breakfast birthday event became far-reaching — across the country and in North Carolina extending to Surf City Wallace Warsaw Raleigh and Wilmington at Bangz Hair Salon where Howell works.