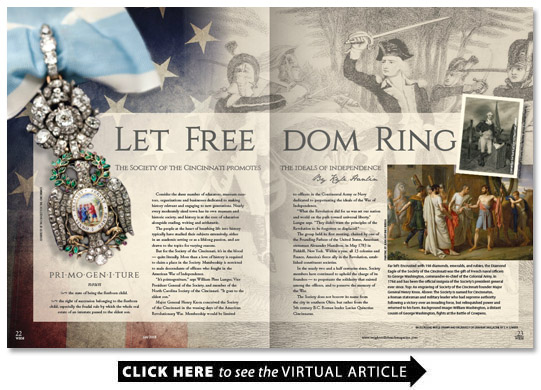 noun – the state of being the firstborn child.

-the right of succession belonging to the firstborn child especially the feudal rule by which the whole real estate of an intestate passed to the eldest son.

Consider the sheer number of educators museum curators organizations and businesses dedicated to making history relevant and engaging to new generations. Nearly every moderately sized town has its own museum and historic society and history is at the core of education alongside reading writing and arithmetic.

The people at the heart of breathing life into history typically have studied their subjects extensively either in an academic setting or as a lifelong passion and are drawn to the topics for varying reasons.

But for the Society of the Cincinnati it’s in the blood — quite literally. More than a love of history is required to claim a place in the Society. Membership is restricted to male descendants of officers who fought in the American War of Independence.

“It’s primogeniture ” says William Pless Lunger Vice President General of the Society and member of the North Carolina Society of the Cincinnati. “It goes to the eldest son.”

Major General Henry Knox conceived the Society of the Cincinnati in the waning days of the American Revolutionary War. Membership would be limited to officers in the Continental Army or Navy dedicated to perpetuating the ideals of the War of Independence.

“What the Revolution did for us was set our nation and world on the path toward universal liberty ” Lunger says. “They didn’t want the principles of the Revolution to be forgotten or displaced.”

The group held its first meeting chaired by one of the Founding Fathers of the United States American statesman Alexander Hamilton in May 1783 in Fishkill New York. Within a year all 13 colonies and France America’s fierce ally in the Revolution established constituent societies.

In the nearly two and a half centuries since Society members have continued to uphold the charge of its founders — to perpetuate the solidarity that existed among the officers and to preserve the memory of the War.

The Society does not borrow its name from the city in southern Ohio but rather from the 5th century B.C. Roman leader Lucius Quinctius Cincinnatus.

Called to leadership by his fellow citizens after an invasion Cincinnatus left his farm and upon victory essentially was in dictatorial control of Rome. He then relinquished his powers to the Senate and returned to his farm.

“On our eagle membership pin you have one side where the senators are giving him a sword and on the other he’s turning it back in for a plowshare ” Lunger says.

Fittingly George Washington served as the first President General of the Society of the Cincinnati. Washington had virtually unlimited powers as commander-in-chief of the Continental Army but resigned his commission and retired to his farm at Mount Vernon before reluctantly agreeing to serve as the first president of the United States (1789 to 1797). Washington remained a member until his death in 1799.

There are about 3 600 members of the Society of the Cincinnati in the United States and about 400 in France. When it was first formed Society rules called for membership to be passed to the officer’s first-born male heir. But through the years not all male heirs produced sons. Given those and other difficulties each of the 13 state societies has its own membership rules although lineage remains a prerequisite.

The North Carolina Society boasts about 400 members including 15 from New Hanover County and welcomes 5 to 10 new members each year.

“It’s a lengthy process ” says Tony Maupin president of the North Carolina chapter. “We’re trying to figure out a way of shortening it. The problem is just going through several genealogists and trying to find a direct descent from that ancestor that fought in the Revolution in the Continental line.”

For Maupin membership was a no-brainer. His father served as president of the North Carolina Society as well as president general of the entire Society. That led Maupin to join at age 21 while a junior at The Citadel although it took him several years to fully participate.

The modern-day Society focuses much of its attention and resources on education. It launched The American Revolution Institute of the Society of the Cincinnati in 2014 with the aim of reforming history education and ensuring the story of the Revolution and the accomplishments of the revolutionaries are widely recognized.

“They don’t teach Revolutionary history that much anymore in high school ” Maupin says. “That’s sad. Most history starts post-Civil War. One of our missions is to showcase what our ancestors bled and died for and that’s the freedom that we have cherished so long.”

Anderson House the Society’s palatial headquarters in Washington D.C. houses a library and museum for scholars and the public alike to view a vast collection of artifacts and documents from the Revolution.

“It’s absolutely eye-popping ” Lunger says. “We have books but we have an incredible source library where we have everybody’s letters original documents and things like that. We get some 6 000 scholars a year that come to study in our library.”

“We just want people to learn about the contributions and the sacrifices we made ” Lunger says. “What people don’t understand is at the time of the Revolution there was no freedom. You were either a subject under a church under a dictator or under a czar. There was no freedom in the world.”