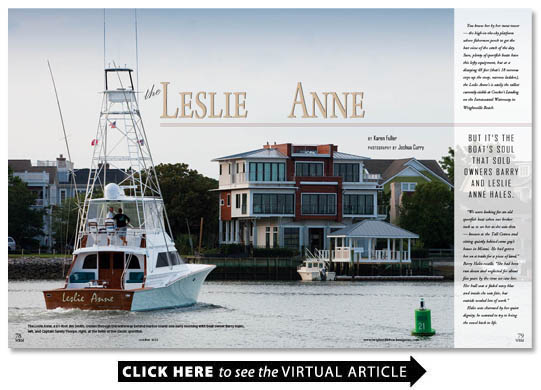 You know her by her tuna tower the high-in-the-sky platform where fishermen perch to get the best view of the catch of the day. Sure plenty of sportfish boats have this lofty equipment but at a dizzying 48 feet (thats 18 nervous steps up the steep narrow ladders) the Leslie Annes is easily the tallest currently visible at Crockers Landing on the Intracoastal Waterway in Wrightsville Beach.

But its the boats soul that sold owners Barry and Leslie Anne Hales.

We were looking for an old sportfish boat when our broker took us to see her as she was then known as the Tall Cotton and sitting quietly behind some guys house in Miami. He had gotten her on a trade for a piece of land Barry Hales recalls. She had been run down and neglected for about five years by the time we saw her. Her hull was a faded navy blue and inside she was fair but outside needed lots of work.

Hales was charmed by her quiet dignity; he wanted to try to bring the vessel back to life.

Built in 1988 by Jim Smith originally a raceboat designer famous for building boats that were narrow light and fast the twist is this one was also built for distance.

Shes a sports car of the sportfishing world. Back in that day no one traveled for long distances in these kinds of boats Hales explains. But this boat has two of everything dual systems two engines two air conditioners two water pumps. She was made to travel. Its very unusual for her age.

The 61-foot sportfisherman has been around long enough to earn her salt fishing in Panama Central America the southern Caribbean and Florida.

She was reaching out and traveling port to port before boats like this were really doing it Hales says.

The Leslie Anne traveled this way for about 15 years being well cared for the whole while before coming to rest for a bit in San Juan until the trade-for-land deal docked her in Miami. All this travel made her many friends and she is recognized in numerous southern ports.

That recognition makes Hales proud. He tells stories of the Leslie Anne being remembered and welcomed in fishing ports in the Bahamas and Cuba; of Coast Guard officers noticing and knowing her out on the sea; and of the overwhelming homecoming experienced in Stuart Florida at the inlet where she was originally built and where some of her restoration took place.

When we pulled in it felt like we were taking an old dog home Hales says. A man came over and said he hadnt seen her in 20 years. But he remembered her right away. It was emotional and very cool.

Hales didnt possess a strict vision for the Leslie Anne; he just had a feeling that with some love she could be something truly special.

From the moment I saw the boat I was in love with her lines he says. I could see she needed a little work and in some ways she wasnt entirely aesthetically pleasing. But those lines really spoke to me. I was able to see how pretty she could be. You take a boat like that freshen her up work through her systems and she starts coming back to life.

Below decks the Haleses installed wood on the cabin sole added furnishings and refreshed the d�cor and style.

When we got her she had carpet everywhere. When we pulled up the carpet we saw floors. … It was like discovering a secret treasure Hales says.

Julie Robinson of Airlie Moon assisted the Haleses with the interior design. The three staterooms were remodeled in an understated nautical theme with warm teak wood exposed throughout. The galley has granite countertops refrigerated drawers custom cabinetry and all of the equipment needed to prepare elegant meals.

Sam Rowell of SR Marine Interiors Stuart Florida who originally worked on the boats interiors was called in to consult during renovations.

The mechanical work restoration was a different story. The original engines have been rebuilt time and again. And they serve her well.

She can run at just 50 percent power and still keep up with everyone else at 40 knots Hales says.

To refurbish the exterior Hales spent a lot of time talking to the people who actually built the hull to restore her to her glory. He enlisted the help of the boats original builders to help him preserve the aesthetics and lines.

We want to make sure we dont mess up lines. We dont want to disrupt her integrity Hales says. Bringing Leslie Anne back into shape is only half the battle. Keeping her in top-notch condition takes continuous attention. We are blessed to have one of the most dedicated yacht caretakers on the East Coast Brandon Floyd. I think he is the finest yacht maintenance and teak person in the business. He takes as much pride in Leslie Anne as I do.

Another key person on Leslie Annes team is Sandy Thorpe captain for the last two years.

Its a real honor and a blessing to have her to be able to care for her keep her up and running and have had a role in bringing her back to her roots Hales says adding that he always takes care to honor her history and character. I have so much passion for her and where shes been. Shes had more water under her than boats twice her age. Shes an early adventurer wandering the sea that way when nobody else was really doing it. If youre going to own a boat like this you should believe shes alive.