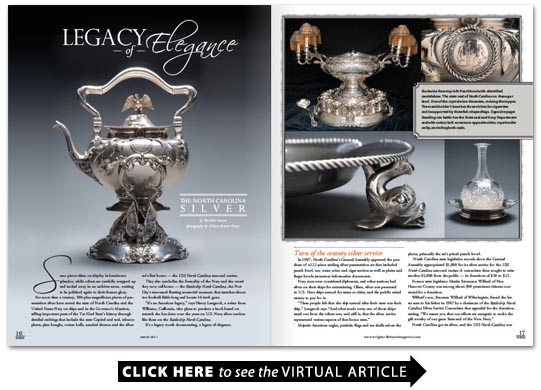 Some pieces shine on display in handsome splendor while others are carefully wrapped up and tucked away in an archives room waiting to be polished again to their former glory.

For more than a century 100-plus magnificent pieces of presentation silver have served the state of North Carolina and the United States Navy on ships and in the Governors Mansion telling important parts of the Tar Heel States history through detailed etchings that include the state Capitol and seal tobacco plants pine boughs cotton bolls nautical themes and the silver sets first home the USS North Carolina armored cruiser.

They also symbolize the formality of the Navy and the vessel they now call home the Battleship North Carolina the Port Citys renowned floating memorial museum that stretches about two football fields long and boasts 16-inch guns.

“Its an American legacy ” says Sherry Langrock a writer from Williams California who plans to produce a book based on research she has done over the years on U.S. Navy silver services like those on the Battleship North Carolina.

Its a legacy worth documenting a legacy of elegance.

Navy men were considered diplomats and other nations had silver on their ships for entertaining. Often silver was presented to U.S. Navy ships named for states or cities and the public raised money to pay for it.

“Those people felt that the ship named after their state was their ship ” Langrock says. “And what made every one of those ships stand out from the others was and still is that the silver service represented various aspects of that home state.”

North Carolina state legislative records show the General Assembly appropriated $5 000 for its silver service for the USS North Carolina armored cruiser. A committee then sought to raise another $5 000 from the public in donations of $10 to $25.

Former state legislator Martin Stevenson Willard of New Hanover County was among about 300 prominent citizens contacted for a donation.

Willards son Emerson Willard of Wilmington found the letter sent to his father in 1907 by a chairman of the Battleship North Carolina Silver Service Committee that appealed for the donation stating “We assure you that our efforts are energetic to make the gift worthy of our great State and of the New Navy.”

North Carolina got its silver and the USS North Carolina was commissioned in 1908 at Norfolk Virginia with a stately silver service presentation ceremony held later that year off the coast of Beaufort.

“It was donated to the armored cruiser by the state of North Carolina with great pomp and circumstance ” says director of the Battleship North Carolina Capt. Terry Bragg.

Etiquette of the day
North Carolinas presentation silver service manufactured by Dominick & Haff of New York was more than just an object of beauty and intricacy.

“Captains or admirals when they pull into one of these ports in a foreign country they would have a huge amount of socializing to do but in the name of the United States so they would actually use the silver ” Langrock says.

Silver pieces in todays battleship collection include unusual electrified candelabras on the punch bowl a large pitcher for ice water and a tray for ice cream.

“The Navy was then very proud that we had electrified the ships ” Langrock says. “They were showing other countries Look at us. We have electricity. We make ice on our ship.”

“The services really adhere to the etiquette of the day ” Langrock comments.

An honorary continuity of history
“Formality is the heritage of the Navy ” says Bragg who spent 30 years on Navy battleships.

The armored cruiser had several adventures in its time including carrying President-elect William Howard Taft on a tour of the Panama Canal construction in 1909 making history with the catapult launch of a Curtiss flying boat in 1915 and providing a U.S. presence across the globe during and after World War I.

But the cruiser was renamed the USS Charlotte in 1920 so the name USS North Carolina could be given to a new planned battleship and was later decommissioned.

The silver went into Navy storage in Virginia in 1920 with plans to transfer it to the new BB-52 battleship. However construction for the ship ended due to post-World War I treaty limitations says Kim Robinson Sincox Battleship museum services director.

But the silvers journey did not end in storage. A timeline from the museum and old newspaper reports show it later spent years in the custody of the Daughters of the American Revolution in North Carolina on board the USS Raleigh and at the Governors Mansion.

Then in 1941 another USS North Carolina became its home the BB-55 battleship that is now the floating museum.

“It became an honorary continuity of history ” Bragg says.

Archived at the museum a 1961 letter written by W.Y. Preyer to a Greensboro Committee chairman of the USS North Carolina Battleship Commission described the silver during the 1941 commissioning that Gov. J. Melville Broughton attended in New York. The approximately 122-piece set must have appeared larger than life as pictured by Preyer.

“The commissioning of a large ship during time of war was most impressive. The Governor had brought up from Raleigh the very large and handsome silver service over 500 pieces”

But one service the silver was not built for was war. In 1942 it was transferred to the New York Navy Yard for safekeeping as the Battleship was readied for World War II.

“When you go to war you go in and take all the wood off of it you go in take any historical items off of it you prepare the combatant for warfare ” Bragg says of the ship. “And so strip ship was done and then the silver was offloaded and put in storage again.”

It then was moved aboard the amphibious force flagship USS Pocono built by the North Carolina Shipbuilding Co. in Wilmington. Next it was again transferred to the Governors Mansion (around 1958).

But the silver destined for ship duty was soon reunited with the Battleship.

The Battleship was settled into its berth on the banks of the Cape Fear River in Wilmington in 1961 and the silver service was returned to the ship in 1965. Gov. Dan K. Moore and his wife Jeanelle presented it for public display. It has since been on loan to several museums but is currently back at the Battleship museum.

Two of the silver pieces a water pitcher and serving tray are on loan to the newest USS North Carolina a nuclear attack submarine commissioned in Wilmington in 2008.

“The legacy continues ” Bragg says. “Its part of that continuity.”

“The silver is considered a museum prize ” Battleship curator of collections Mary Ames Booker says. “Its gorgeous and its traveled.”

“It was an era of diplomacy ” Sincox says of the period the service saw duty.

“Many ships have a formal silver service ” Bragg says. “But I couldnt think of any today that actually have something as special as the Battleship silver the North Carolina silver.”

The Battleship also has a pair of silver candlesticks a punch bowl and a cigarette case donated by the family of Vice Admiral Olaf M. Hustvedt the former commanding officer of the BB-55 Battleship North Carolina.

officials hope to craft a curatorial display as they work on upcoming plans that include renovating the wardroom repairing the bow and developing overnight camping programs Bragg says.


“The Battleship is blessed with some just extraordinary original art as well as the silver and other heirloom pieces and those pieces fit within the design style of a wardroom ” Bragg says. “Every ship Ive ever served on has been an elegant place something special a retreat more of a fine dining facility and a country club just as a respite from the rigors of being at sea.”